A NEW COLD WAR & THE “WEAPONIZATION” OF GOLD

A NEW COLD WAR & THE “WEAPONIZATION” OF GOLD

THE INGREDIENTS OF A NEW “COLD WAR”

There are numerous underlying Global Conflicts that are occurring which the CoronaVirus media coverage is presently drowning out! This includes escalating actions in Syria, South China Sea, North Korea & the weaponizing of Space. We are increasingly seeing evidence of a new form of a COLD WAR emerging which supports our 2020 Thesis’ Investment Themes. Gold is increasingly become an economic weapon and we suspect will increasingly be so in the dawning Post-Covid-19 Multi-Polar world.

We fully expect a “Blame Game” will soon ensue about who is responsible for the CoronaVirus. Why were early results hidden and were there nefarious motivations? It will become political as the Global economic & financial damage of the pandemic mount!
Military Strategists are working overtime to achieve sovereign competitive advantages while deploying defenses. The key to currently watch is the US Military becoming increasingly the spokesperson in an escalation of blaming China for the devastation caused by the pandemic originating in China and initially opaquely concealed by the WHO. We explore that below along with one of the investment conclusions from the Thesis 2020: Global Conflict.
THESIS 2020:  Global Conflict                                              FULL VERSION LOCATED AT BOTTOM OF NEWSLETTER:  .pdf Download
THE MILITARY-INDUSTRIAL COMPLEX’S ‘NARRATIVE’  NOW CIRCULATING IN WASHINGTON
Here in bullet format is the talking point narrative now being touted by the hundreds of former senior government officials (645 in 2018 alone) that have gone through the “revolving door’ to work for the defense industry as lobbyists, executives, consultants, or board members. This gives them an inside track on forming public policy. If you think this is an insignificant fact then remember that the last three secretaries of defense have been a former board member of General Dynamics, a former Boeing executive, and the former chief lobbyist for Raytheon, respectively.
DEVELOPMENTS TO WATCH – the “BLAME GAME”
CHINA & RUSSIA’S MASSIVE CENTRAL BANK GOLD ACCUMULATION – THEY HAVE BEEN PREPARING FOR SOMETHING? 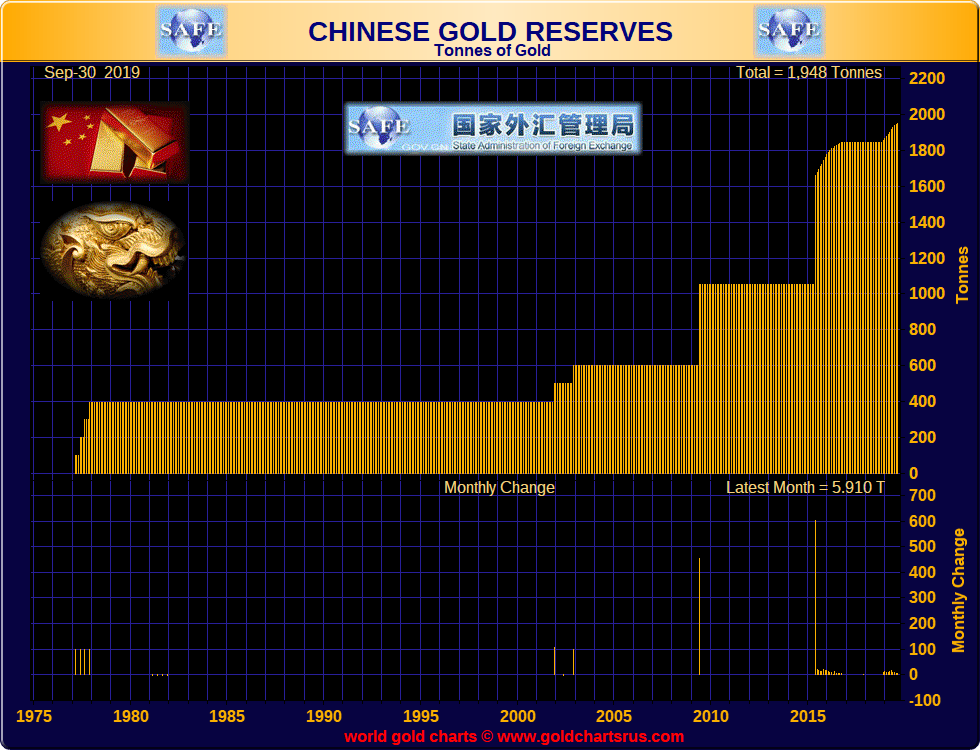 .
WEAPONIZING GOLD
The US Military Industrial Complex will use the Pandemic to support its argument that China is a military threat. China on the other hand has for years now clearly seen the US Economy as in serious troubles and fatally exposed to its out of control debt levels. China & Russia have build gold reserves for the inevitable problem that would stem from the US  building a country on increasingly debt fueled Unsound Money, an out-dated Reserve Currency Status, and an over-extended global military. Something was going to “prick the bubble”!  If it wasn’t the Pandemic it would be something else.
China and Russia knew Gold would be the likely central global response – and has been preparing accordingly. Like stockpiling ‘bullets’ and weapons for a potential conflict, they have been stockpiling Gold for an Economic Conflict!!
PROOF

Subscribe to view full post content
SUBSCRIBE
GOLD ACTIVITY – WEEKLY
We created and labeled this chart during our Thesis 2020 research efforts in late December / Early January. The Elliott Wave labeling has turned out to be quite accurate so far. Our analysis indicates we are headed higher, though there are consolidations required to keep price and time closer to its intermediate term parabolic rise (see the weekly elliptical boundary condition below)

Subscribe to view full post content
SUBSCRIBE
GOLD ACTIVITY – DAILY
We have shown the chart below previously. In our Feb 13th Newsletter  we called our expectations of a touch of the Red Ellipse which subsequently occurred. We then discussed it again in the Macro Analytics Video “CoronaCarnage” at the Ellipse now calling for a lift through the spring which has also occurred. Our weekly chart (above) and Daily Chart (below) indicates we are now headed higher though we will need consolidations to keep price and time closer to the Elliptical (parabolic) lift which we presently expect to occur. Keep this live chart on your desktop!