We do a lot of Cycle work at MATASII.com as it is a critical element in developing our Strategic Investment Insights (SII) & Watch Lists. What few fully appreciate and is critical to cycle timing is:

James A. Kostohryz recently expanded on this in Seeking Alpha:

At this particular stage of the US business cycle, below-trend GDP growth of 1.0% to 2.0% - to the extent that it stabilizes within this range - will actually maximize the length of the current economic expansion and will most probably increase the length and intensity of the current bull market in US equities. This is one of the most important inferences that should be drawn from the GDP report. The inflation data released in this same report have even greater bullish implications. 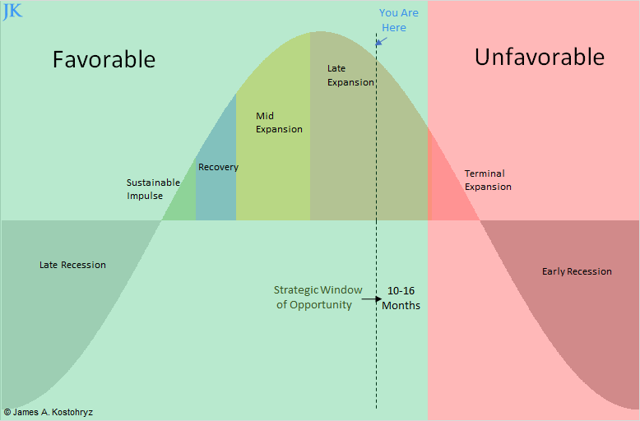 Below is James A. Kostohryz's full article:

The Bureau of Economic Analysis (BEA) released, on April 26, 2019, its "Advance Estimate" of US GDP for the first quarter (1Q) of 2019. According to this report, US Gross Domestic Product (GDP) grew at an annualized rate of 3.2% in the first quarter of 2019. This was well above the consensus estimate prior to the release.

This sort of simplistic and conventional analysis by both bulls and bears, which assumes that "fast GDP growth is good for stocks" and "slow GDP growth is bad for stocks", completely misinterprets the significance of the data which came out of this GDP report.

There are two main aspects of the data reported which have extremely bullish implications for the stocks that comprise the major US equity indices such as the S&P 500 (SPY) and the Dow Jones Industrial Average (DIA): 1) Economic activity data; 2) Inflation data.

In this article, I will briefly review only one aspect of this report which has very bullish implications for US equities - specifically, the economic activity data. After a brief review of this data, I will explain why slow growth of economic activity that has been estimated in this report is a very good thing for stocks at this particular late stage of the business cycle.

A Brief Review of the Economic Activity Data

According to the BEA, US Gross Domestic Product grew at an annualized rate of 3.2% in the first quarter of 2019. This figure was well above the consensus estimate prior to the release.

However, many analysts have noted that this figure was not accurately representative of the true underlying strength of domestic economic activity for the quarter.

The following extraordinary, one-off and/or temporary issues were mainly responsible for the surprising headline GDP number.

Decomposition of the contributors to the headline GDP number reveals that about 2.1% - over two-thirds - of the total 3.2% growth figure came from the unsustainable inventory build, fleeting government spending growth, and the temporary improvement in net exports.

Economic activity categorized as "final sales to private domestic purchasers" - which strips out the impact of inventory changes, foreign trade and government spending - slowed from 2.6% annualized growth pace in 4Q 2018 to a 1.3% in 1Q 2019 - the slowest growth in this indicator since 2013.

Virtually, all financial market participants already knew that US domestic demand had slowed during 1Q 2019, for a variety of reasons, so the figures reflecting a slowdown in overall economic activity was not a surprise. Furthermore, economic releases since the second week of March have been consistently indicating that economic activity has been clearly reaccelerating since February.

Therefore, because weak economic activity data was expected and because recent data have been looking better, the low advanced final sales number for 1Q 2019 (which will probably be revised upward, in any event) should not be a major cause of concern for US equity investors.

Far from representing bearish news for US stocks, the slowdown in domestic US economic activity that occurred in 1Q 2019 is actually very positive news for US equities. Contrary to popular belief, strong GDP growth at this particular stage of the business cycle would not be a positive development for S&P 500 (SP500) stock returns in on a 1-to-2-year time frame. The deceleration of domestic demand represents a net positive development for the outlook for US equities in the next 12 to 24 months in the sense that below-trend domestic demand growth is actually consistent with the below-trend potential growth rate of aggregate supply of the US economy, at this particular point in the business cycle, when rates of labor and capital resource utilization are very high. Any growth rate in aggregate demand that exceeds the potential growth rate of aggregate supply at this late stage of the business cycle will tend to shorten an economic expansion due to the effects of "overheating."

At this particular point in time, a GDP growth rate which runs along at, or slightly below, the potential rate of aggregate supply growth (around 2%) is the best-case scenario for financial markets, and stocks in particular, because it will minimize economic distortions, caused by the demand-supply imbalances that emerge in an over-heated economy, thereby drawing out the expected length of the current economic expansion.

Figure 1: The US Business Cycle and the Strategic Window of Favorable Conditions for US Equities

During the Late Expansion stage of the US business cycle, slow growth - at or below the rate of the economy's potential growth rate of aggregate supply, which at this particular stage of the business cycle is only around 2% - will tend to push the Terminal Expansion stage further out into the future and increase both the duration and intensity of the current US equity bull market.

Financial markets commentators have generally been interpreting the data from the GDP report in a simplistic manner - assuming that slow growth is bad for stocks - which fails to recognize the present business cycle context in which the US macro-economy is operating. This reflexive and simplistic manner of interpretation fails to take into account the particular state that the US macro-economy finds itself in, in terms of its progression through the US business cycle.

At this particular stage of the US business cycle, below-trend GDP growth of 1.0% to 2.0% - to the extent that it stabilizes within this range - will actually maximize the length of the current economic expansion and will most probably increase the length and intensity of the current bull market in US equities. This is one of the most important inferences that should be drawn from the GDP report. The inflation data released in this same report have even greater bullish implications.