Some investors are buying U.S. Treasurys without hedging against the risk of a decline in the dollar 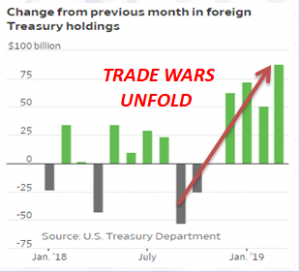 International Carry Trade investors typically hedge their holdings of foreign bonds using derivatives AS A CURRENCY HEDGE, which allow them to borrow a foreign currency in exchange for their own and lock in a future interest rate. This practice has recently been jettisoned in an attempt to capture higher returns.

The cardinal rule of the Carry Trade is to buy in a weakening currency. If not then hedge!

Below is a 05-02-19 WSJ article " Behind the Bond Rally: A Strong Dollar" which gives further detail to this shift

Some investors are wading into U.S. Treasurys without paying to protect themselves against fluctuations in the dollar, a bet that continuing U.S. economic strength and comparatively high interest rates will keep the currency grinding higher.

That marks a reversal from late last year, when the high cost of hedging against the dollar’s fluctuations kept some foreign investors out of U.S. debt and yields climbed to multiyear highs.

The strategy has rewarded investors who bet on the dollar recently, as the currency defied the expectations of many Wall Street banks by steadily appreciating to a recent two-year high. Many believe that more gains are ahead, given an unsteady economic outlook in places such as Europe and Japan.

The yield on the 10-year U.S. Treasury note, a benchmark for global financial markets that helps set borrowing costs on everything from student loans to mortgages, plumbed fresh 2019 lows on Friday after President Trump’s threat to impose tariffs on all Mexican imports rattled global markets. 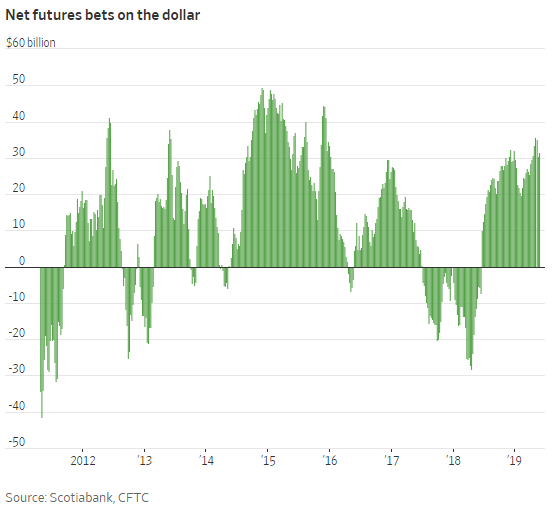 The announcement surprised investors already grappling with escalating trade tensions between the U.S. and China, the world’s second-largest economy. Concerns over whether the conflicts will affect global growth are likely to maintain demand for assets perceived as relatively safe, analysts said.

Tim Alt, who manages bond and currency portfolios for Aviva Investors, said he bought Treasury securities for accounts domiciled overseas without hedging the bonds to protect against the risk that the dollar could decline.

“When the rest of the world is struggling and the outlook is uncertain, it makes sense to take refuge in haven currencies,” he said.

“The longer that the uncertainty around trade issues remains outstanding” the longer the dollar will be supported, Mr. Alt said.

Investors will get a read on whether recent wage gains for workers are holding up when the U.S. releases its employment report for May on Friday. Rising wages could lift inflation, posing a threat to the value of bonds’ fixed interest and principal payments. Other key economic indicators include the Institute for Supply Management’s manufacturing index on Monday and April factory orders on Tuesday. 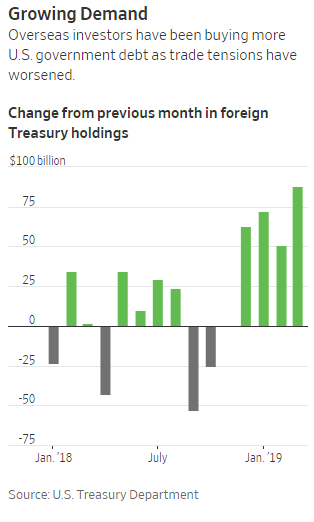 International investors typically hedge their holdings of foreign bonds using derivatives, which allow them to borrow a foreign currency in exchange for their own and lock in a future interest rate at which they will reverse the transaction.

The difference between investing with protection versus holding Treasurys unhedged can be significant. A Japanese investor buying 10-year Treasurys unhedged now earns a 2.14% yield on a three-month rolling basis, compared with negative 0.65% for a hedged purchase. A European investor would lock in a yield of negative 0.84% while hedging the euro.

“By the end of 2018, many investors realized that had they come into Treasurys on an unhedged basis they would have made money,” said Ed Al-Hussainy, senior interest-rate and currency analyst at Columbia Threadneedle.

At the same time, these investors “can’t meet their yield targets by staying home,” he said.

The strategy can go wrong in several ways. An unexpected breakthrough in trade talks between the U.S. and China, for example, could reignite investors’ risk appetite, pushing them out of Treasurys and other haven assets. That possibility seems like a long shot to many analysts, as the U.S. and Beijing dig in for what many worry could become a long, drawn-out trade conflict.

Foreign investors increased their holdings of U.S. government debt in the first three months of the year by 3.4%, according to international ownership data from the Treasury Department. The dollar has edged higher since then and now stands near a two-year high, while net futures bets on more dollar gains are near their highest point since 2015.

Nippon Life Insurance Co., Japan’s largest insurer by revenue, said earlier this year that it plans to beef up its holdings of unhedged foreign bonds and reduce those with currency hedges through March 2020. The company’s chief investment officer told Reuters he saw limited risk of the yen rising against the dollar over coming months.

Investors say there are few alternatives to the dollar or to the $15 trillion market for U.S. government debt.

The supply of Treasurys is also expected to continue growing as the Trump administration runs a series of trillion-dollar budget deficits starting next year. Some analysts said the increased supply of debt ensures plenty of liquidity for traders and increases its appeal at a time when riskier assets are making big swings.

William Dinning, head of investment strategy and communication at U.K.-based Waverton Investment Management, is among those buying up long-dated U.S. Treasurys. He sees renewed concerns about U.S.-China trade tensions weighing on China or economies in Europe, but less on the U.S.

“This idea that Trump and [Chinese] President Xi [Jinping] could shake hands, that’s fallen by the wayside,” said Mr. Dinning. “But I don’t personally think it’s a huge issue for the U.S. economy in aggregate.”

FAIR USE NOTICEThis site contains copyrighted material the use of which has not always been specifically authorized by the copyright owner. We are making such material available in our efforts to advance understanding of environmental, political, human rights, economic, democracy, scientific, and social justice issues, etc. We believe this constitutes a 'fair use' of any such copyrighted material as provided for in section 107 of the US Copyright Law. In accordance with Title 17 U.S.C. Section 107, the material on this site is distributed without profit to those who have expressed a prior interest in receiving the included information for research and educational purposes.  If you wish to use copyrighted material from this site for purposes of your own that go beyond 'fair use', you must obtain permission from the copyright owner.