Today's market moving announcements by Apple should come as little surprise to Apple investors. Apple has been suffering for some time now with the fatal flaw of being a company with too high a price point in a mature market. It has ridden the liquidity lift of Quantitative Easing (QE) and now feels the restrictive 'pinch' of Quantitative Tightening (QT).  The only way out of such a situation for Apple is more breakthrough innovation that fosters a major high margin growth market which innovation leadership awards. Unfortunately, Apple is no longer the visionary leader it once was and is riding the "momentum flywheel" like previous giants such as IBM, likewise trying to monetize its base thought 'Services'. 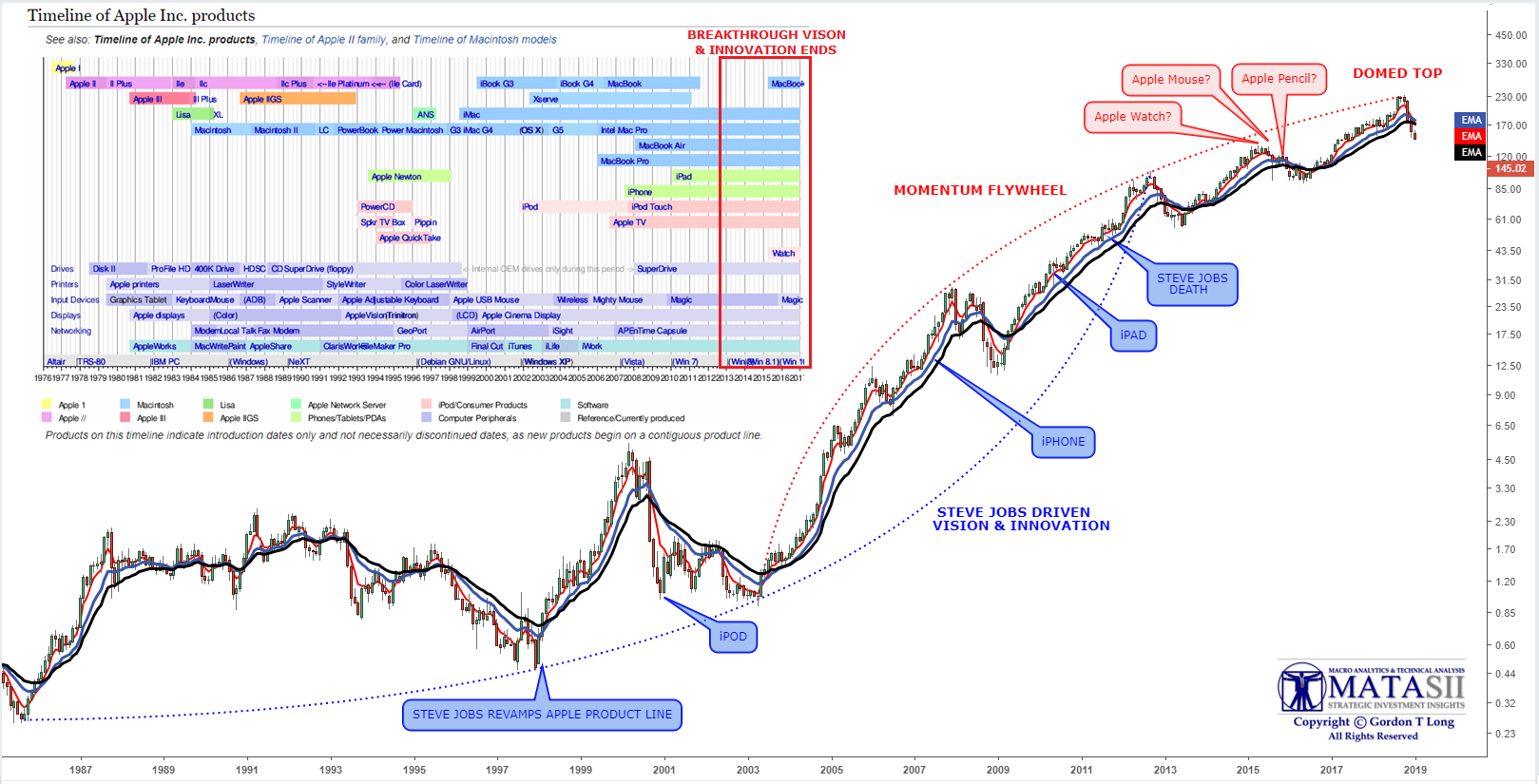 AAPL has likely peaked and will put in a 'domed top' likely consisting of an "M" top or Head & Shoulders formation, before heading towards its Longer Term Support level. Many larger investors already see this  such as the Swiss National Bank who have been unloading their massive Apple holdings.  If it wasn't for Apple being the clear global leader in Corporate Buybacks and as a result being among the top two holdings of four of the five largest ETFs and additionally held by 266 U.S. ETFs, representing total allocations of $46 billion, (more than 1% of all U.S. ETF assets) - it would hold nowhere near the market capitalization it presently has.

Apple has made strategic mistakes has Doug Kass so clearly points out:

Apple is in a pickle with 60% of the company experiencing shrinking revenue.  Apple has been losing market share globally for years and not innovating for years as well, besides price gouging innovation (as it pushed the envelope of demand elasticity by ever increasing its ASPs). Wall Street analysts and investors looked through this because sales were expanding. But now, with contraction comes pain and the reality that the company's business cycle has passed its best days.  Apple seems to have two choices - neither is good for the stock. Handsets are no longer cool. Apple is no longer a status symbol. The company can keep average selling prices where it is and keep losing market share and eventually become less relevant. Or, Apple can cut their selling prices in an attempt to get market share back.

Neither will help EPS over the next year or two. Apple has made a mistake. They should have focused more on share and not exclusively on ASPs. Share is what matters in an industry like this, especially when trying to grow a services annuity. You want an installed base to do that.  As things stand now, a shrinking share of a hardware company that hasn't innovated - trading at 10x EPS looks generous looking at history. But, because EPS will keep getting worse like it does for nearly every hardware and computer company that gets themselves on the wrong side of things (too high priced products) in a mature industry. 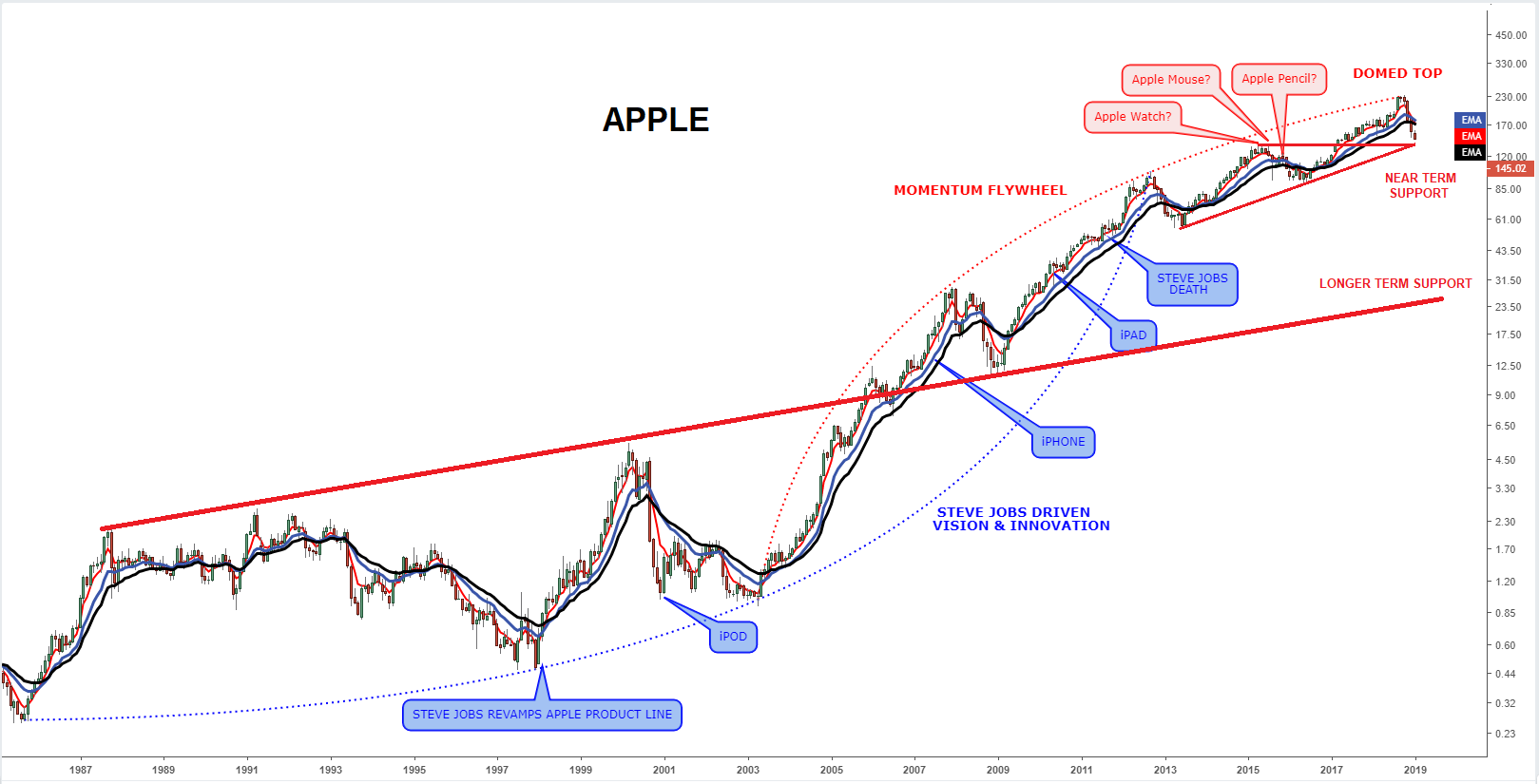 We have been skeptical of Apple market capitalization since it hit our short Trigger at $198.50. As each successive support level has been broken it has further confirmed our suspicions that once it weakens the flight to safety by 'Passive' investors via their ETF Index holdings, momentum will quickly become negative. Our proprietary MATA (Momentum Analytics & Technical Analysis) indicator below shows this. 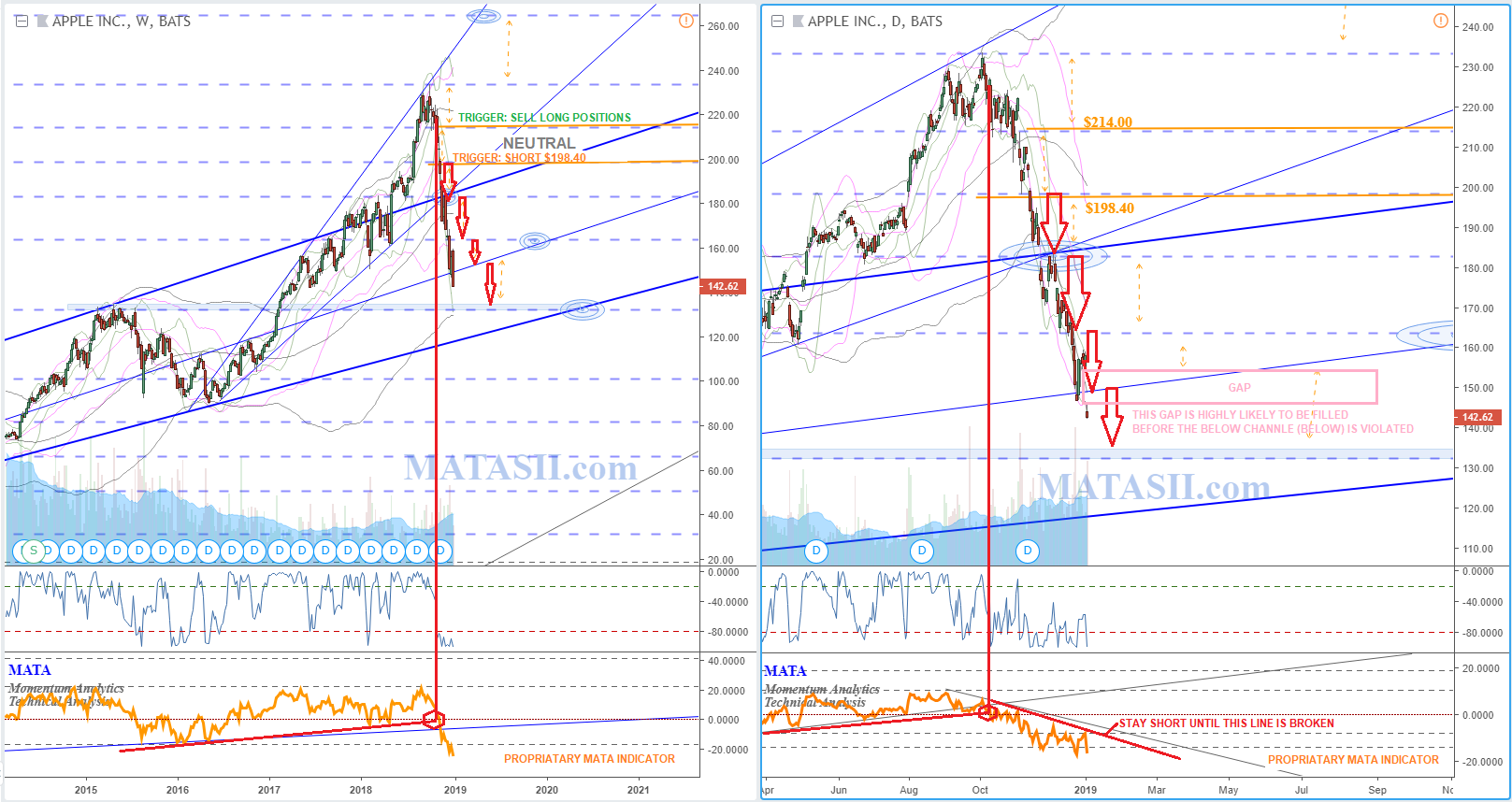 Until the Fed signals a change in policy and a halt on Quntitative Tightening, Apple will continue to give back market capitalization accrued during the era of QE!