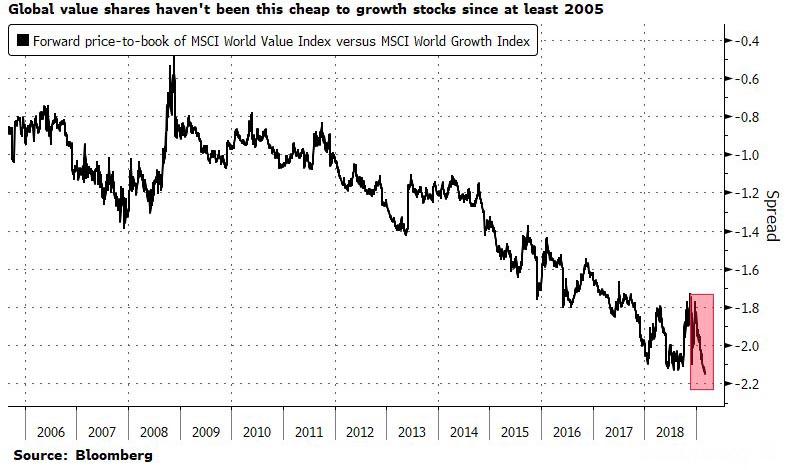 The record divergence between value and growth suggests that mean reversion is imminent: “Make no mistake - this is a tactical call,” they said. “we still think that earnings growth is slowing compared to recent years and at some point the poor quality of corporate debt will weigh on buybacks and earnings. But at the same time valuation spreads are incredibly wide and sentiment may have found a floor." 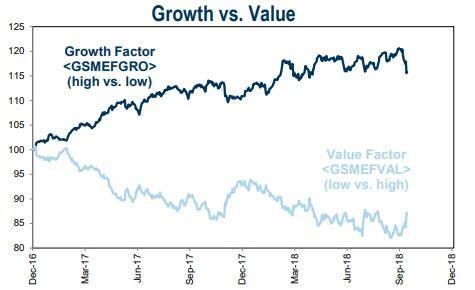 The market's infatuation with punishing value stocks while bidding up the shittiest growth names has hit historic proportions.

According to Bernstein quants, the valuation divergence between the cheapest and priciest companies has reached a level never seen before in nearly 70 years of market observations, prompting the firm to urge clients to fade the extreme divergence between "cheap" and "expensive" stocks:

"Valuation spreads in the U.S. are close to all-time wide levels compared to the past 70 years," Bernstein's Inigo Fraser-Jenkins wrote, adding that "they are also wide in other regions. This provides a support for value within the market contrasted with traditional asset classes which are mostly fully valued." Factoring easier financial conditions and the coming rebound in European and Asian economies sets the stage for a long-overdue out-performance in value stocks over the next 6 to 12 months, the firm predicts.

As Bloomberg observes, the call is at odds with value bears at Credit Suisse "and belies the relentless pursuit for safe equities that offer solid corporate earnings late in the business cycle."

That value has lagged both the broader market and certainly growth stocks for the past decade, and also for the past 2 months, is hardly news: with central bank backstops, investors have flocked to companies that boast high growth and/or low-volatility, claiming that "cheap stocks are cheap for a good reason." More recently, companies with strong balance sheets have also joined the rally, amid some fringe expectations that we have come to the end of the rally and it's time to rotate into "safer" corporations with little to no debt.

Another reason to turn bullish on value: the sector tends to outperform after sell-side profit projections have bottomed out, as is the case now, according to Bernstein.

“Value as a style tends to perform better than average when there have been extreme troughs in the earnings revisions balance series particularly 6-12 months following the point of most aggressive downgrades,” the bank wrote quoted by Bloomberg.

Nowhere is the gap between the "cheapest" and "expensive" firms more evident than among European automakers, where Ferrari trades at 12 times forward price-to-book, while troubled Renault trades at just 0.4 times.

That said, one can also make the opposite case, as Credit Suisse has done, pointing to recent historical price trends, and noting that bargain hunting has been a losers’ game post crisis as low-priced equities have trailed growth shares for years, in the process putting countless value-investors out of business. Intuitively this makes sense: with central banks willing to step in every time there is a modest correction in the market and provide support for risk assets, there is little reason to shy away from the most expensive group of companies (growth stocks trade at the highest P/Es for a reason).

Credit Suisse strategist Andrew Garthwaite summed up the bearish view saying that low-priced equities might end up as a “value trap” for one reason: many undervalued industries like automakers and utilities are in the grip of unusually strong disruption trends.

That argument however is not swaying the Bernstein quants, who believes that the record divergence between value and growth suggests that mean reversion is imminent: “Make no mistake - this is a tactical call,” they said. “we still think that earnings growth is slowing compared to recent years and at some point the poor quality of corporate debt will weigh on buybacks and earnings. But at the same time valuation spreads are incredibly wide and sentiment may have found a floor."

Of course, this is merely the latest call for convergence between value and growth... we get one such call on average every other month, and the reason why nobody remembers them is that so far - for the past decade - they have been overwhelmingly wrong. Whether this time is different will depend on the only thing that matters for the market: what central banks do next.