"People feel completely betrayed, they feel abandoned, they feel even hated and despised by the political class and also by the media"

This is clear statement of the situation in the UK before the upcoming EU elections.  Here is more detail

Since Nigel Farage officially launched the 'Brexit Party' six weeks during a coming-out party in Coventry, Farage and his allies have ridden widespread frustration with a seemingly ineffectual British political establishment to the top of the polls, attracting waves of defectors from the Tories and Labour.

The most recent polls - taken just days before the vote, which, for the UK, will take place on Thursday - show the Brexit Party is up by double-digits over its nearest rival, the Liberal Democrats. Meanwhile, support for Labour and the Tories has dwindled to single-digit levels. 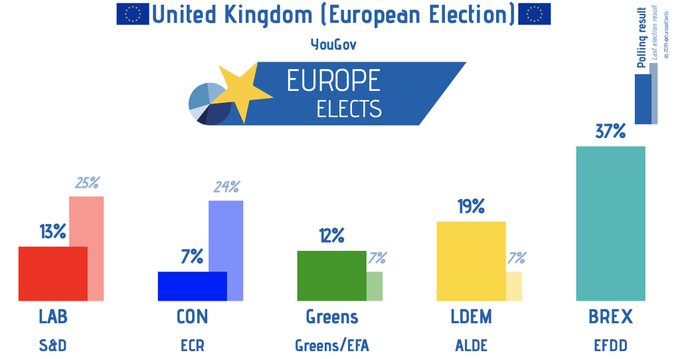 If the Brexit Party succeeds, its candidates will occupy a plurality of the UK's 73 MEP seats. In the European Parliament, they will join a growing group of euroskeptic parties that have pledged to oppose the Brussels agenda at every turn and, where they can, change it entirely.

Created just four months ago after Farage officially left UKIP, a pro-Brexit party that Farage once led, but that, according to the man who is widely credited as the architect of Brexit, had become increasingly occupied by racists and Islamophobes.

Ironically, the New York Times offers one of the most apt explanations of how Farage managed to pull this off:

As Brexit chainsaws its way through British politics, dismantling decades-old political allegiances, tearing apart the traditional parties and leaving voters confused, frustrated and angry, the Brexit Party is thriving by offering a simple and hard-edge message.

"People feel completely betrayed, they feel abandoned, they feel even hated and despised by the political class and also by the media," said Martin Daubney, the lifelong Labour voter now standing for the Brexit Party, who used to edit a raunchy men’s magazine before reinventing himself as an anti-pornography advocate. "It feels like a grass-roots political revolution on the streets of Britain right now."

Should the Brexit Party succeed in winning the largest share of the vote this week, it will send an unequivocal message to the dithering Tories: The people want Brexit, regardless of the details. A Brexit Party success could give pro-Leave Tories the ammunition they need to see it through.

As the Brexit Party has surged in the polls, the backlash from remainers has intensified, culminating with Farage being 'milkshaked' during a campaign rally in Newcastle.

His assailant was arrested. But the incident was followed on Wednesday by a swarm of protesters holding milkshakes surrounding Farage's campaign bus, according to the Independent. If anything, these incidents have only helped the Brexit Party's standing in the polls. And Farage appeared to take the attack in stride.

Sadly some remainers have become radicalised, to the extent that normal campaigning is becoming impossible.
For a civilised democracy to work you need the losers consent, politicians not accepting the referendum result have led us to this.

Political opponents who have denounced Farage as a fascist are having a much harder time arguing against his heterodox slate of candidates, which includes several former revolutionary communists who once defended the IRA's deadly bombing campaign.

Though the Brexit party has been vague about its policy positions (apart from supporting the UK's immediate departure from the EU, even if that means a 'hard' or 'no deal' Brexit), the party's candidates would probably join with other euroskeptic MEPs once they take their seats. However, to determine where it stands on other issues, the Brexit Party has said it would set up an online forum where supporters can weigh in, similar to a platform run by the Five Star Movement in Italy.

But more than anything else, the Brexit Party has benefited from disillusionment with Theresa May's promise that she would take the UK out of the EU on time and in an orderly manner because "Brexit means Brexit." Her inability to do so may have alienated a whole generation of Tory voters.

"It doesn’t matter what happens from now on, I will never ever stick a cross in the Tory box ever again," said Andrew Kirby, 44, sitting beside his father. "There’s nothing that could happen.

If the Brexit Party doesn’t come to anything, I shall never vote again."