European car sales turned in their weakest performance in the first quarter since an industrywide contraction five years ago, as U.K. consumers’ apprehension over Brexit continued to erode demand in the region’s second-largest market.

First-quarter registrations edged up 0.6 percent, according to figures released Wednesday by the Brussels-based European Automobile Manufacturers’ Association, or ACEA. The gain was the slowest since the second quarter of 2013, when the region was in the throes of a downturn. A 5.2 percent downturn in March, led by drops in three of the five biggest markets -- Germany, the U.K. and Italy -- suggests that “momentum is starting to slow,” the ACEA said.

The slide has been particularly acute in the U.K., where car sales were down 16 percent in March and 12 percent for the quarter. Part of that can be blamed on extreme winter weather and an April 2017 increase in vehicle taxes that led to a spate of purchases last March.

But Brexit is an ongoing drag, said Ian Plummer, manufacturing and agency director for new and used-car listing site Auto Trader. The lack of an agreement between the European Union and the U.K. on how the country’s pullout from the trade bloc should proceed is making businesses less willing to plan on expansion or hiring.

“Not only has it severely dented consumer confidence, but falling exchange rates has reduced the scope for manufacturers to entice consumers with strong offers due to the impact of a falling pound on the profitability of cars sold in the U.K.,” he said in an email. 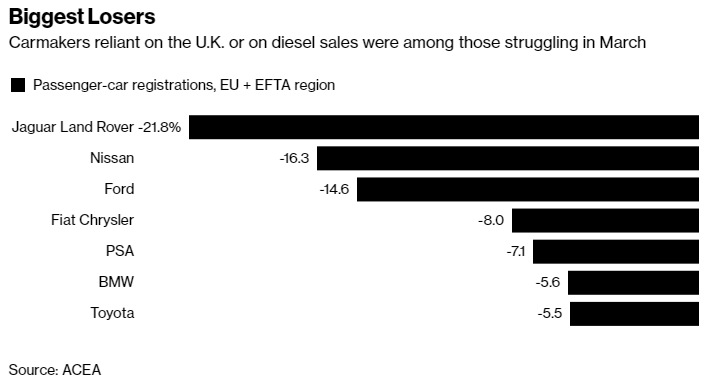 While consumer spending in Britain declined in February and March, according to credit-card provider Visa, the regional economy is also slowing. Economic gauges in the euro area have missed estimates.

In Europe’s biggest automotive market, two German research institutes posted figures Tuesday indicating a slide in investor confidence and a rising risk of recession. The weakening in Europe’s largest economy is partly tied to the trade tensions between the EU and the U.S.

The ACEA said in January that it expected sales growth to decelerate this year. PSA Group CEO Carlos Tavares, who heads the industry group, said at the time that major EU legislation on CO2 targets and the threat of Brexit are weakening the car market’s recovery.

The European automotive market remains “stable,” executives at PSA, the owner of Peugeot, Opel and Vauxhall brands, said in an earnings presentation in March.

STALLING FORD & GM PUMPING THE BRAKES ON SUPPLIERS FORD STOCK ISN’T AS CHEAP AS IT LOOKS!