HERE’S WHY WE HAVE A “FAKE NEWS” YIELD CURVE INVERSION

HERE'S WHY WE HAVE A "FAKE NEWS" YIELD CURVE INVERSION

If we examine this year’s Treasury auctions compared to last year we see from days gone by an interesting reincarnation of "Operation Twist"!  We are seeing

So what is going on here?

THE GROSS MISINTERPRETATION - "The Yield Curve has Inverted"

We  immediately find ourselves reading headlines from the news sources that  The Treasury yield curve just inverted, sounding the alarm for recession!   An iverted yield curve immediately triggers the conclusion that we are not only now late in the credit cycle but may potentially already be in the early stages of the long overdue and highly anticipated recession. Everyone reacts accordingly. But is this in fact what it the yield curve inversion is signalling?

We suspect what we are realistically  witnessing a massive bond short squeeze. We warned of this problem on 04/28/18 at MATASII - "SPECULATORS HAVE NEVER BEEN MORE SHORT BONDS...EVER? - NOR ARE SPECULATORS SELDOM RIGHT!! " 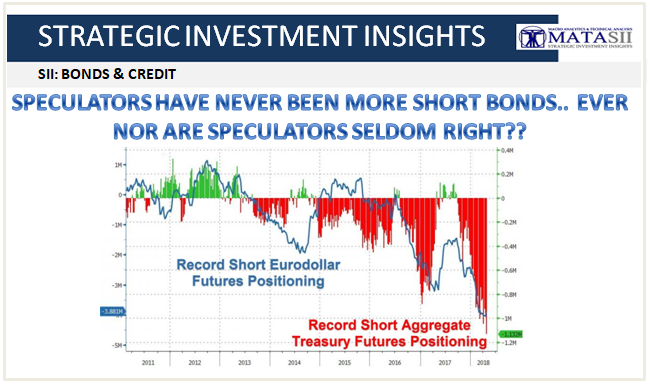 What is occurring is that futures traders are seeing an opportunity to take profits on their massive short positions and re-balance portfolio exposure.

What ignited their actions was last week's speech by Fed Chairman Jerome Powell. The trading community specifically focused on Powell's statement: “we will remain just below the broad range of estimates of the level that would be neutral for the economy”. They found it very disconcerting and reacted accordingly!  Meanwhile Economists were much less excited, with many viewing the new language as simply an attempt to correct any misunderstanding of his October remark.

A short side note from Bloomberg sheds further evidence:

Funds shorting Treasuries are finding there’s nowhere to hide, as one position after another gets squeezed. Long-end bonds may be next.

The yield on 30-year bonds has dropped about 13 basis points as the notes racked up four days of gains. That just as speculative net short positioning has been gradually increasing, according to the latest data from the Commodity Futures Trading Commission.

As bond yields dropped and the Treasury yield curve flattened on Monday, positions were finally getting shed in the long-end. Open positions in 20- to 30-year futures saw a combined reduction of $7 million per basis point, a measure of interest-rate risk exposure being reduced.

The cut in positions, equivalent to just over $8 billion of 10-year cash bonds, may just be a start of what’s in play. Traders would be aware of a strong seasonality in the five to 30-year Treasury spread in December -- which has contracted nine times in the past decade. 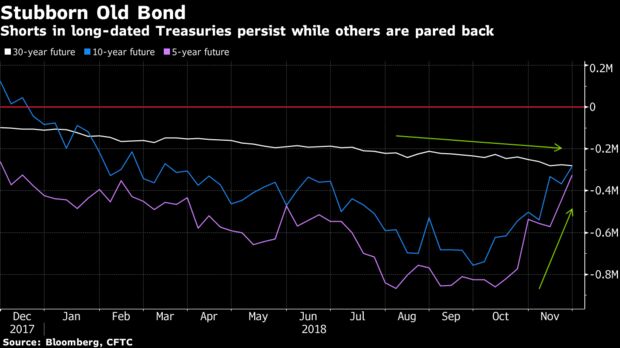 BE CAREFUL OF TRADING BEHAVIOR IGNITED FROM AN INVERTED YIELD CURVE

There is a strong probability based on the SPX:TNX Log Ratio (below) that this whole reaction will be short lived. Stocks may have only received a G-20 "Truce Boost" with a resulting Bond Short squeeze.  However, this may all be very short lived.

The long term SPX:TNX pattern suggests that stocks are likely to soon correct significantly while bond yields shoot higher as the government budget fight unfolds when the new congress soon arrives in Washington.

MATASII’S PROPRIETARY “MATA INDICATOR” CALLED THE CORPORATE INVESTMENT GRADE SELLOFF WHAT WE LEARNED ABOUT THE FUTURE OF THE BOND MARKET FROM OUR ‘THESIS 2019: DE-DOLLARIZATION’ PAPER