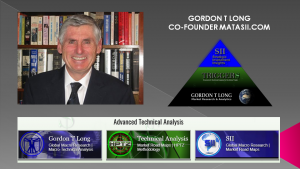 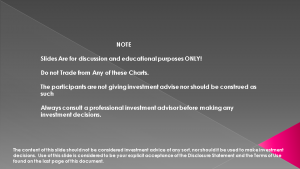 A REMINDER BEFORE WE BEGIN: DO NO NOT TRADE FROM ANY OF THESE SLIDES - they are COMMENTARY for educational and discussions purposes ONLY.

In this year’s first UnderTheLens video I would like to set the stage for our focus in 2021.

For those new to our service it may be helpful to start by differentiating our monthly UnderTheLens video from our monthly LONGWave video.

The LONGWave videos focus on the Markets from a Technical Analysis, Fundamental, Risk and Sentiment perspectives as shown at the top.

The UnderTheLens video examines markets from a larger Macro perspective regarding those elements that eventually affect trends in Fundamentals and Risk but also dislocation or false beliefs that can suddenly arrive like Black Swans and shock markets with major lifts and sell-offs.

Anyone who has been in markets long enough understands how months or even years of profits can suddenly disappear, almost instantly!

This year we hope to focus our UnderTheLens’ Macro Analytics in an increasingly structured fashion as shown on the outline headings on the left. We think it will better assist us and you with categorizing market risk and portfolio exposures.

We have just issued our annual Thesis paper entitled Social Suppression.  It brings together a lot of prior Thesis papers which point to clear dislocations and turmoil ahead.

As such we need to outline, not so much what our conclusions are in this year’s Thesis paper, but rather a large number of critical elements that need to be fully appreciated.

There are sufficient areas to be discussed, as a platform for forward ongoing analysis, that we have been forced to break the discussion in three parts.

We hate to do this but there are over a 100 slides involved, many of which we feel we will be referring to throughout 2021.

In this session we will tackle Part I: The central problems facing the Global Macro that are most likely to impact your policy strategies and positioning.

What we have witnessed throughout the progression of our Annual Thesis papers over the last decade is the continuous surrender of both Personal and Economic Freedoms.

These freedoms were eroded out of fear and desire by ‘We the People” for the perceived guarantees of security and safety.

First it was Economic Job Security after the Dotcom Bubble implosion as Corporations:

.. while the ‘Mom & Pop’ Businesses and Down Town merchants were lost to Corporate Franchisers, Malls and Big Box Stores.

Where we experienced financial pressures in the form of:

Then Terrorism and our Physical Safety after 911 as the world changed due to:

Now it is a Pandemic and the safety of the Health of family and friends.

WAS THIS AN ORCHESTRATED PROGRESSION?

These man-made actions and initiatives were as a result and contributors to a number of mounting Globalization problems.

In turn these developments pushed the political landscape further towards the bottom of the Nolan Chart to the right.

A chronology of Poor Policy Prescriptions, Expanding Government Control and a Reserve Currency & Risk-Free Benchmark problems have set the stage for a ‘Cocktail’ of Social Unrest & Shift towards looming Social Suppression.

We will come back to this in more detail

This is the list some of the major problems facing global leadership, financial institutions and political regimes. Almost all have been explored in prior annual Thesis papers:

US Mortgage Market – Started as a collapse in Credit Default Swaps (CDSs) underpinning Collateralized Debt Obligations (CDOs) which supported the US Mortgage Market through Fannie Mae and Freddie Mac (which forced both into government guaranteed Conservatorship).

EU Banking Crisis – It started in Greece and spread to Cyprus and then the southern peripheral countries labeled the PIGS (Portugal, Italy, Greece & Spain) before being halted by an

WE NOW HAVE A GLOBALALIZATION PROBLEM

Our Annual Thesis papers documented the above evolution within the context of crisis strategic developments.

In the early part of the last decade we witnessed with the following Thesis papers:

Rather than address issues our elected officials chose to avoid the tough decisions and to “Kick-the-Can-Down-The-Road”.

The easy way to solve a lack of productive investment (short term) is to implement macro-prudential policies of Financial Repression which misprices the price of risk and cripples effective market price discovery.

We witnessed policies that fostered Misinformation, Data Manipulation, Monetary Malfeasance, Mispricing of Risk and other short term “quick fix” approaches.  All of which led to Malinvestment.

As a result we saw the emergence of Moral Hazard, Unintended Consequences and Dysfunctional Markets.  The Deceptions, Distortions and Delusions that occurred can only be labeled as an Era of Monetary Malpractice.

In the middle years of the last decade we witnessed with the following Thesis papers:

A failing Economic System as a result of Unsound Money forced governments as a consequence to enforce Control in lieu of a natural self correcting system.

Developed economies became increasingly burdened and trapped by Unfundable Entitlement programs which were left to worsen and become the problem of future political administrations.

An inevitable Loss of Trust of politicians, the government, financial institutions and the Status Quo grew within the electorate as populism grew. With it came new political leaders with socialist, nationalist and anti-government philosophies.

The above developments led to a shift towards Statism in the progression outlined here which we documented for a couple of years.

We have been living under Macro Prudential Economic policies of Financial Repression since the turn of the Millennium and for longer than at any time in America’s history ….  With no end game in sight!

LAST PART OF THE DECADE

In the last part of the last decade we witnessed with the following Thesis papers:

Government Deficit Borrowing being double counted as “G” and “C” in the GDP formula hiding the degree of Insufficient Real Growth occurring over the last 3 decades.

The US’ use of economic sanctions has effectively “Weaponization the US$” thereby forcing targeted countries (and their trading partners) to reduce their US$ dependency. Additionally, BRICS have steadily been reducing their US$ currency reserves along with many countries adopting bi-lateral trade agreements using their own currencies.

Not since the Cold War have tensions being higher around the world. From the South China Sea, to Taiwan, Hong Kong, India, Iran, Syria, Yemen/Sudan these conflicts continue to go unresolved with escalating Power Tensions.

The world’s modern post WWII financial system is built on two bedrocks which are under assault:

Additionally, as we outlined in last year’s Thesis paper we have entered an era of Global Conflict based on a number of factors including economic survival for many players.

We have three major power centers competing for Global control, which we outlined in this year’s Thesis paper: Social Suppression.

All three place us on the road to centralized government control not decentralization where we should be headed.

It is leading us away from the choice and power of the individual to the control of collectivism.

The US is the last bastion of freedom and capitalism.

The US was founded on the Ideas of:

The Globalists’ believes this is no longer possible.

At the same time we are entering a time where:

while the U.S. National Debt was over $10 trillion.

-- Perhaps we’re approaching another such divergence?

This will not be allowed!

The probably therefore continues to increase, that as we pointed out in last February’s UnderTheLens outlook, we are highly likely headed towards some form of the Nationalization of US and Global Financial Markets? 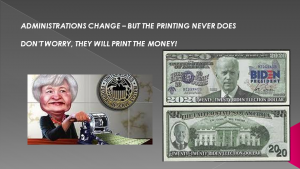 So until we talk again, may 2021 turn out to be an outstanding investment year for you and your family. 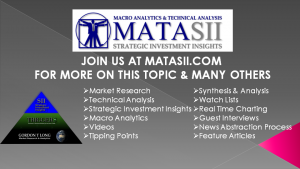