IT’S THE MORTUARY FOR MANY MUNI’S & REMAINING MONOLINES

IT’S THE MORTUARY FOR MANY MUNI’S & REMAINING MONOLINES

The Muni Bond Market and still solvent Monoline insurers were already facing serious funding and credit rating problems prior to Covid-19, which has made the situation even more tenuous, despite the Fed’s Municipal Lending Facility (MLF). Underfunded Pensions as a result of strong union demands at the State level; poorly maintained, decaying and past its design life municipal infrastructure; endless and costly federal and state regulations; soaring general operating costs all overwhelm a problematic revenue base.
Municipal revenues are not rising face enough in relationship to operating costs. When this happens in business the first and immediate action is to cuts costs to match revenue or it will not survive. This is foreign to government leaders who feel the answer is bailouts or increased taxation, licenses and fees. Cutting services is not a consideration when in fact that may be the only longer term solution realistically available to the survival of many US city, local and small town governments!
Why invest in low yielding, tax sheltered Muni-Bonds in a historically low yield bond environment when the Risk-Reward of Muni default, credit downgrade or price erosion far outweighs what has become increasingly minuscule returns? The ‘gig’ is up! 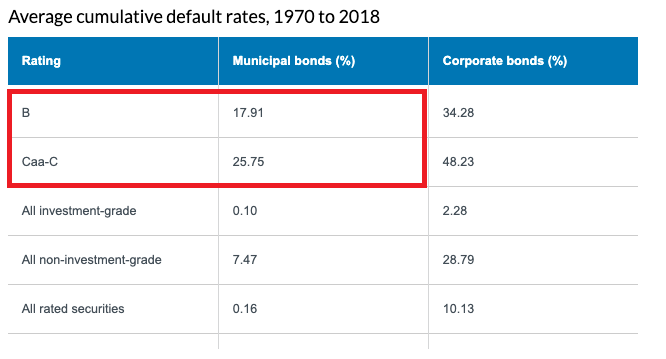 The bigger impact may be on the Monoline Muni-Bond insurers who have barely survived from the 2008 Financial Crisis. MBIA is representative of the the surviving operators who face even bigger problems from the latest crisis.

The 2008 Financial Crisis had a devastating effect on the monoline bond insurance industry as the industry shrunk dramatically and the seeds for future troubles became clearer.

Two major changes came out of the financial crisis that continue to threaten the health of this important industry that is critical to the Muni Bond market:

We are seeing numerous municipalities assuming that, since they paid for the bond insurance, they are entitled to its benefits. Hence, there are an increasing number of instances of municipalities refusing to make their contractual debt service payments thereby requiring the bond insurers to step up and pay. Puerto Rico has gone so far on its insured issues that it now collects the interest payments as they come due from the insurer, and keeping the money rather than pay out interest to bondholders! The presumption in such actions by the municipal bond issuer is ludicrous, but defensible with taxpayers. Bondholders have yet to be heard from.

This pandemic provides an opportunity for distressed bond issuers to come together, declare a financial emergency and essentially renege on future interest and principal payments. And why not, they may even decide to renege on their uninsured debt as well.

For monoline bond insurers the future choices are clearer. For too long, bond insurance has been treated as a credit enhancement tool. It has become a true insurance product.