MARKET AT CRITICAL JUNCTURE & THE BUYBACK BLACKOUT WINDOW MAY BE THE TIPPING POINT!

MARKET AT CRITICAL JUNCTURE & THE BUYBACK BLACKOUT WINDOW MAY BE THE TIPPING POINT!

Last week, one of the most confounding features of the post-Christmas rally was resolved, when following a 4 month boycott, bearish investors finally threw in the towel and after pulling money from equity funds for 13 weeks, bought a whopping $27.3Bn of US stock funds and ETFs in the week ending on March 13th. This was the second largest inflow on record, behind $38.30bn from March of last year, and contrasts with a mix of small inflows and outflows earlier this year, including a $5.83bn outflow in the prior week.

The topic of reversing equity flows was also the key focus in the latest note from DB's Parag Thatte, who writes that following large outflows of over $100bn since October, US equity funds this week saw inflows surge with over $31bn in the first 3 days, helping drive the S&P 500 back to the top of its recent range. 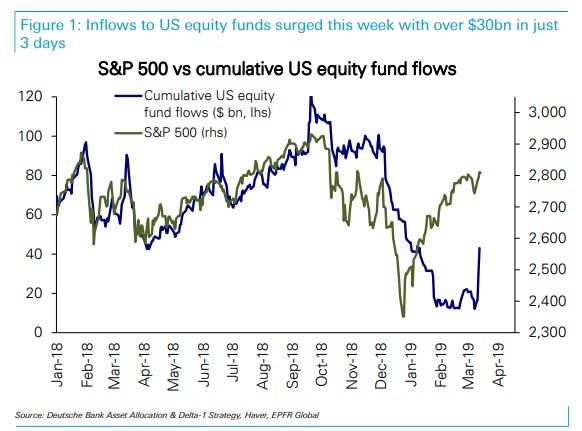 What to make of this sudden fund flow reversal? As Thatte explains, there have been only a handful of episodes (9) in the last few years when US equities saw inflows at such a strong pace. These episodes were of two types:

However, arguing for the former, less cheerful take on the fund flow timing reversal is an additional downside risk that has emerged this week: according to Deutsche, the number of S&P 500 companies in blackouts will ramp up sharply starting in the last week of March and peak mid-April, implying a reduced pace of buybacks. As Thatte warns, "the outsized role played by buybacks in driving the rally in this recovery cycle as well as investor attention focused on the blackout period recently adds to the risks highlighted above."

So as companies are about to go cold turkey on what has been another year of record buybacks, who will be buying - or selling? The answer, as Thatte explains in laying out the various flows expected from systematic strategies, is mixed:

One last observation: Emini (S&P futs) liquidity remains abysmal, with the average ES bid/ask contracts size just above 1,000 and toughly where it average for much of the fourth quarter. This means that any abrupt and sustained reversal will likely lead to sharp and violent drop in the market, as multiple bid levels are taking out in a rerun of what happened in December.