The Macro Analytics "Secondary" Indicators for the 10Y US Treasury illustrates that with the recent drop in yield we have achieved our target yield which we established last fall.

Here is the current 10Y US Treasury for yield as measured by the "TNX":

MATASII has been using the SPX-TNX Yield Ratio on a log scale as a boundary condition chart for this drop. It confirms we have reached the anticipated pivot point.

Thanks in no small part to trade concerns, this week saw the return of the late-March "growth scare" story, as told by bonds, whose "voice" is always pretty ominous at times like these.

10-year yields in the US pushed to their lowest since 2017 on Thursday. 30-year yields fell to the lowest since early last year. In Australia, benchmark yields hit a record low. German bund yields touched -11bp. And on and on. The purple-shaded boxes in the top pane of the visual denote, in order, the bond rally in late March and its ongoing sequel.

Every locale has its own unique dynamics, of course. But the common thread is that renewed trade tensions effectively deep-sixed the economic optimism seen in April, when better-than-expected data out of China (e.g., March activity numbers and Q1 GDP) suggested the world's second-largest economy had bottomed, and was on the verge of inflecting. Recent data out of Beijing threw cold water on that story, though. Indeed, activity data for April showed the Chinese economy decelerating again, even before Donald Trump's latest escalations in the trade conflict.

"Our simulations show that the negative effects on US GDP rise to 0.5% with across-the-board 25% tariff on China and to 0.9% with a 25% tariff on all auto imports", Goldman wrote, in a note dated Tuesday, adding that "the all-in growth effects on China are similar to the US", although the math that gets you there is different. Here's a visualization of the projected GDP drag across regions and under different scenarios: 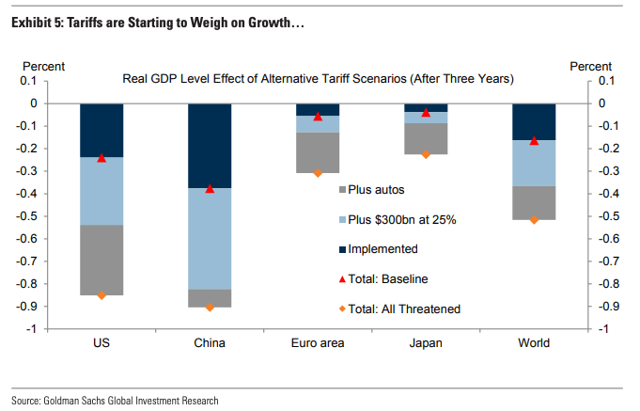 A slew of downbeat data out Thursday underscored Bank of America's "mark to misery" justification for slashing year-end yield forecasts across the board. Japan's manufacturing PMI slipped back into contraction territory, the flash PMI for Germany in May printed below the expansion line for the fifth straight month, Ifo business confidence fell to the lowest since 2014 and then, in the final straw, Markit PMIs for the US missed estimates with the manufacturing gauge printing the lowest since September 2009.

Little wonder, then, that the world is enthralled with bonds. It's a love affair - a duration infatuation, if you will.

But, as my buddy Kevin Muir (formerly head of equity derivatives at RBC Dominion and currently head of research of global and domestic investment products at East West Investment Management) put it on Friday, "the funniest part of this love affair with fixed income is that less than half a year ago [the smart money] was equally convinced bonds were heading lower."

In his note, Kevin cites JPMorgan’s Treasury survey, which shows client longs sitting at the highest levels since 2010. When you throw in Nomura's risk parity model (which betrays a 3-standard deviation DM bond allocation) and EPFR data which shows that since the Fed’s dovish pivot in January, global bond funds have seen some $160 billion in inflows, you can understand why the "love affair" characterization is being bandied about.

But how much sense does this actually make? A lot, if you believe the global economy will indeed succumb to the trade war and roll over in earnest. However, do note that tariffs (and protectionism in general) are facially inflationary. Here's another visual from the Goldman note cited above which shows the bank's projections for inflation under the same trade war scenarios: 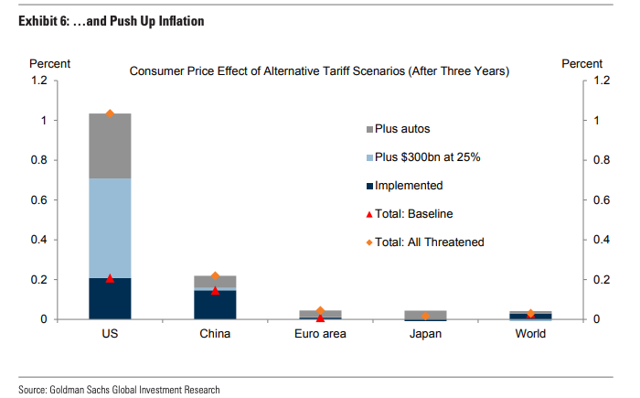 In their own trade war update, Nomura's North American economists wrote the following (this is from a note dated Tuesday as well):

"We believe that the impact of the tariffs that are already in place – 25% on $34bn of imports imposed in July 2018; 25% on $16bn imposed in August 2018; and 10% on $200bn imposed in September 2018 – on consumer prices has largely materialized. The combined impact from the increase from 10% to 25% on $200bn in imports (tranche three) and the 25% tariff on the addition $300bn in imports (tranche four) is estimated to be large as the volume of imports subject to those changes accounts for about 20% of total US goods imports. Moreover, the composition of the fourth tranche is weighted more towards consumer goods relative to previous tranches. There appear to be few readily available alternative sources for many of the consumer goods included in the fourth tranche." 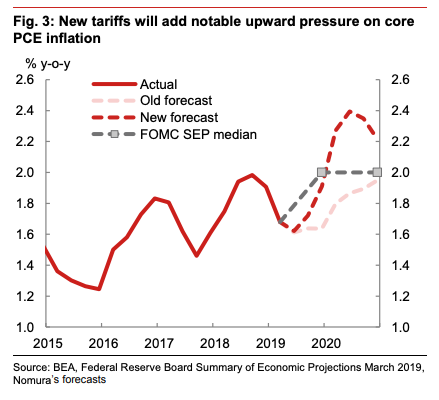 The bank does note that the effect on inflation from the tariffs won't be permanent, but it could be "substantial" in the near term.

Now, consider the effect tariffs on the remainder of Chinese exports to the US will likely have on Beijing's decision calculus when it comes to stimulus. Thus far, China has avoided kitchen-sink-type stimulus, in the interest of not inflating bubbles, both in the real economy and in financial assets. But a piecemeal approach will become less tenable in the event the Trump administration turns the screws even tighter. Remember, there's a sense in which the global cycle (i.e., the reflation impulse) lives and dies by Chinese stimulus. If China does go pedal-to-the-metal (as it were) in a bid to offset the drag from more tariffs, that's inflationary.

Meanwhile, the Fed is of course conducting a policy framework review that many believe will ultimately lead the FOMC to adopt a modified approach to inflation which could include tolerating (or encouraging) overshoots to "make up" for previous shortfalls. This is a big deal, and it's going to start grabbing more headlines over the course of this year.

The point (in case it's not clear enough) is there are all manner of potentially inflationary dynamics on the horizon and, right now, you'd be hard pressed to find anyone who believes that inflation is going to suddenly come roaring back. Hence, the infatuation with bonds.

Well, if everyone is wrong when it comes to inflation, that bond "love affair" is going to look woefully offsides.

"What can drive yields higher? Inflation, which nobody in the investing universe believes is an actual ‘thing’ anymore", Nomura’s Charlie McElligott wrote Thursday.

It goes without saying that if the global economy does not in fact roll over, then the recent rally in bonds will be faded, potentially into the reflationary dynamics outlined above.

In that case, the bond overweight would be akin to lit kindling and any reflationary impulse from China, the effects of the tariffs and/or a signal from the Fed that policymakers will pursue "new" methods to avoid consistently undershooting their inflation target, would be gasoline on the fire.

I'll just close with a couple of additional excerpts from Kevin Muir, who I'm sure will be delighted to see them reiterated:

"Almost all of you will dismiss this as idiocy. I get it. Sentiment is so lop-sided I know this will not be warmly received. But back in October when I preached caution with short positions even though “Bond Kings” were selling with both fists, it also was derided. I have learned that sometimes you have to not worry about your reputation and just do what you think best.

Remember, the hard trades are most often the right trades. And I ask you - what could be harder than fading the current bullish bond sentiment?"