SII – CLIFFS NATURAL RESOURCES UP 23% IN TWO WEEKS SINCE OUR FEATURED POST – HERE’S WHY!

SII - CLIFFS NATURAL RESOURCES UP 23% IN TWO WEEKS SINCE OUR FEATURED POST - HERE'S WHY!

We saw a potential breakout....

We then saw Cliffs break the MATASII "LONG" Trigger level.

The primary reason for this is a spike in Iron Ore... 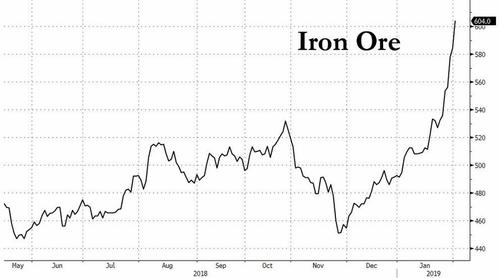 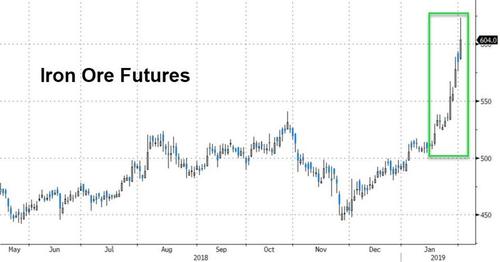 The reason for the dramatic increase in Iron Ore is ....

As we had highlighted in How Vale’s Dam Burst Could Affect Iron Ore Prices, a dam ruptured at one of Vale’s (VALE) mines in Brazil. At least 65 people are confirmed to be dead, and many more are missing. This was the second such incident in the span of around three years. In November 2015, a dam jointly owned by Vale and BHP Billiton (BHP) burst, killing 19 people.

Today, Vale announced that it would cut ~10% of its output (or 40 million tons), as it plans to decommission all dams built by the upstream method. Vale is the largest iron ore miner in the world, and a cut of 40 million tons, if not replaced, could result in a tightening supply of high-grade iron ore.

Today, benchmark seaborne iron ore prices climbed to their highest level in nearly the last two years. According to Bloomberg, Singapore benchmark futures jumped ~10% today before settling at a 4% gain. Analysts also reacted to this news and hiked their price forecasts for iron ore. Goldman Sachs (GS) increased its three-month iron ore price forecast from $70 to $80 per ton.

Vale’s direct seaborne competitors, which include Rio Tinto (RIO) and BHP Billiton (BHP), also stand to benefit from higher iron ore prices. In Australian trading today, Rio’s price hit a 52-week high, while BHP rose 2.6%. While Cleveland-Cliffs exited the direct seaborne iron ore business in 2018, its stock price still takes cues from seaborne prices. Compared to CLF’s 15.5% gain, the S&P 500 Index (SPY) and the Dow Jones Industrial Average (DIA) were trading with gains of 0.53% and 1.12%, respectively, as of 11:00 AM EST.