Last update (2017 10 17) we noted a large expanding wedge pattern bounding the markets lift since 2009 and the increasing potential for extreme volatility.
The S&P has since lifted significantly, slightly breaking up through the wedge patterns resistance and touching the next Fibonacci level. 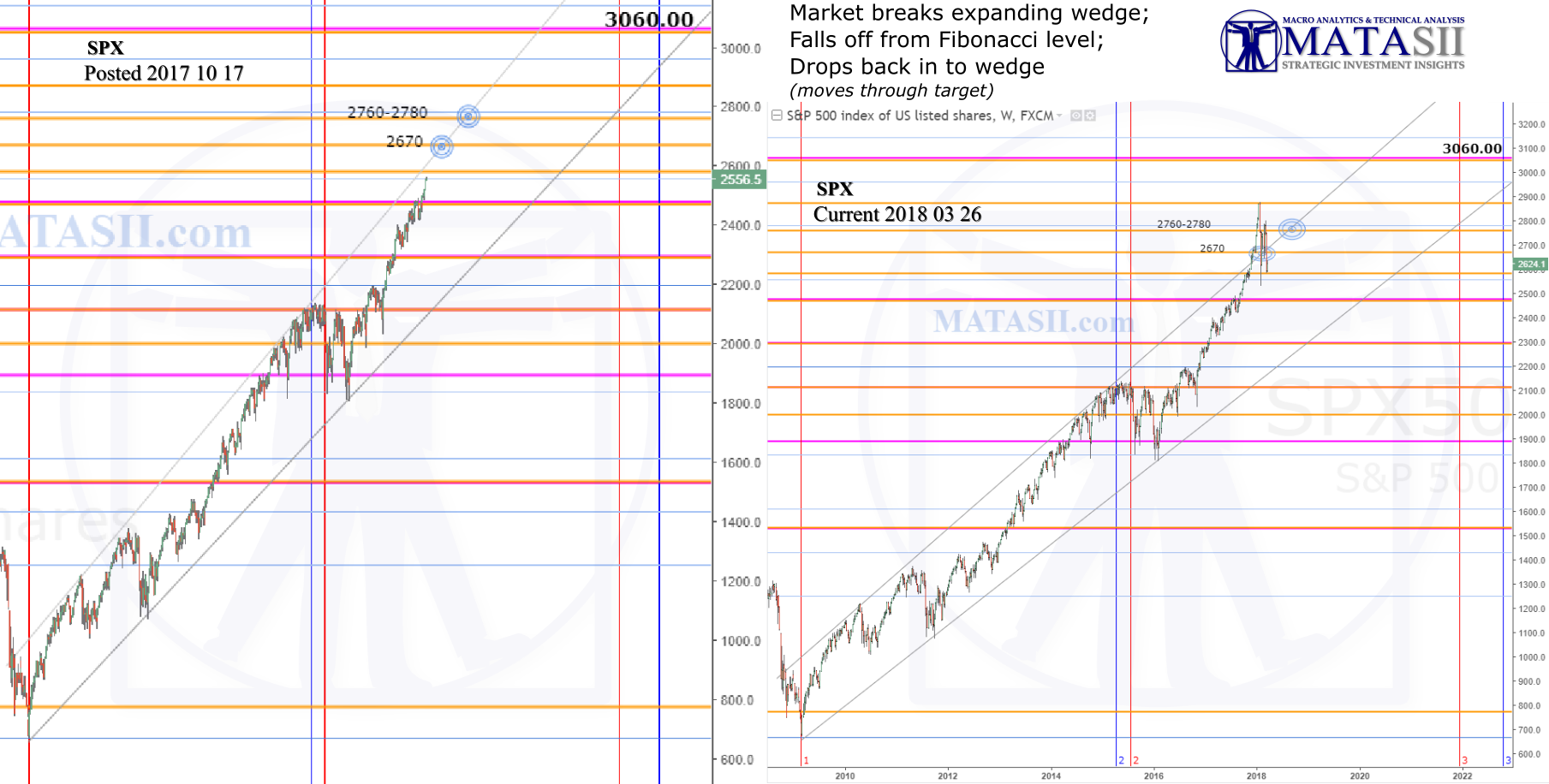 After a quick run to new highs the market has a sudden and violent drop off.  Depending on your perspective, it could appear to be wild and random.  Above we show that the fall off occurred at our next predicted Fib level.  If you had also been watching our weekly charts, you would have seen the market come off a long term weekly channel from 2011-2015.  Below is our Fibonacci extension chart above, overlaid with the Long Term Weekly (blue) channel. 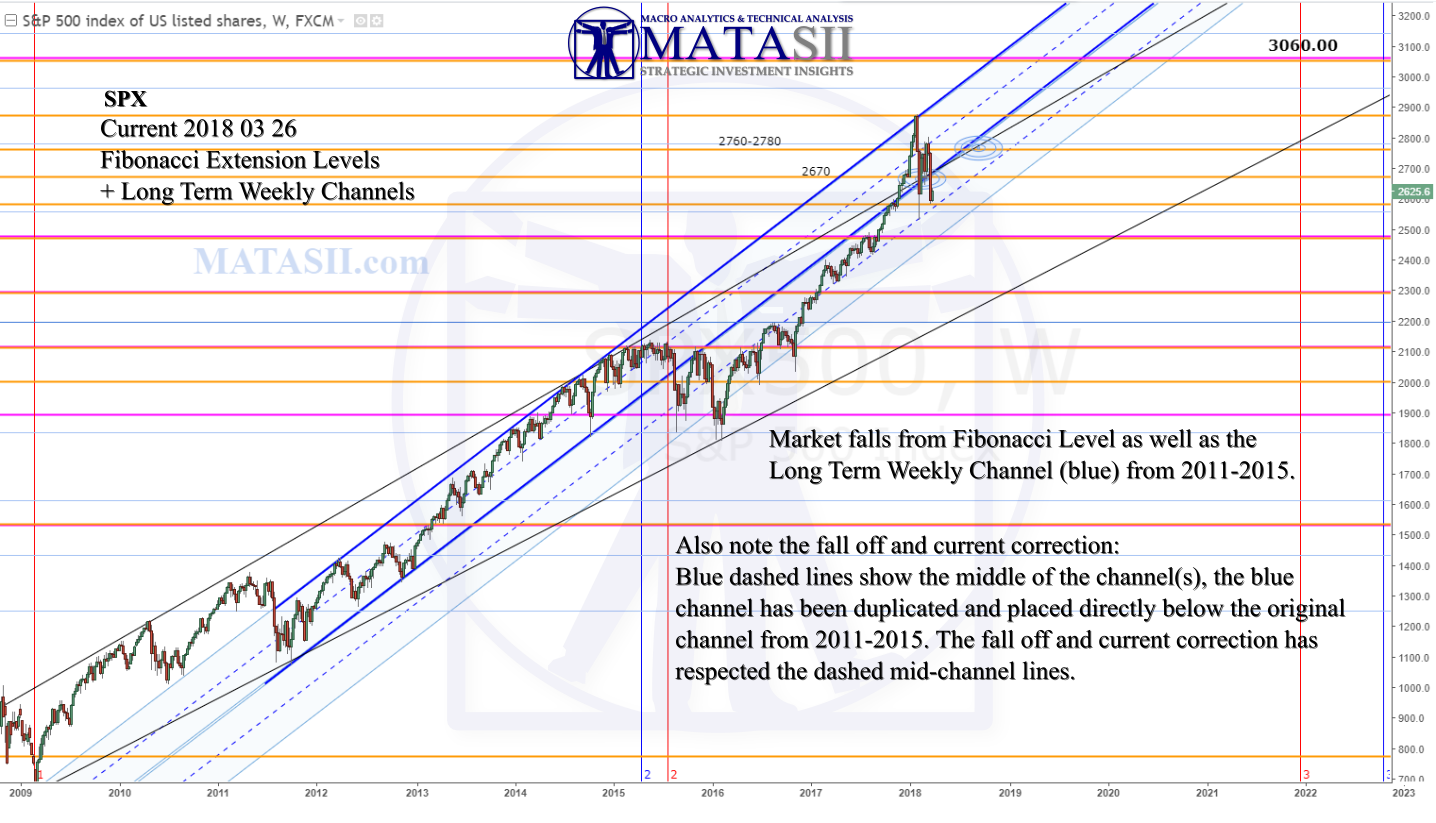 The drop from the channel is also interesting. The markets falls 1.5 x the depth of the blue channel, bouncing and consolidating between the 2 blue dashed mid-channel lines.  The blue channel has been duplicated and placed below the original channel from 2011-2015; the blue dashed lines are the mid s/r's of the channels.

Depending on your perspective, recent market action has been a random wild surprise, or technically perfect.

The recent market drop needs to be examined to see if it can be determined to be a correction or topping.  As we noted in our previous update in Oct 2017, the market could technically drop all the way back to the support of the grey/black expanding wedge it has been lifting in since 2009 and still be in an up trend. The previous charts above show this wedge clearly, and they suggest that it is still technically possible to see a drop back to 2200-2300.

Here is a look at the current weekly chart, with minimal annotation. 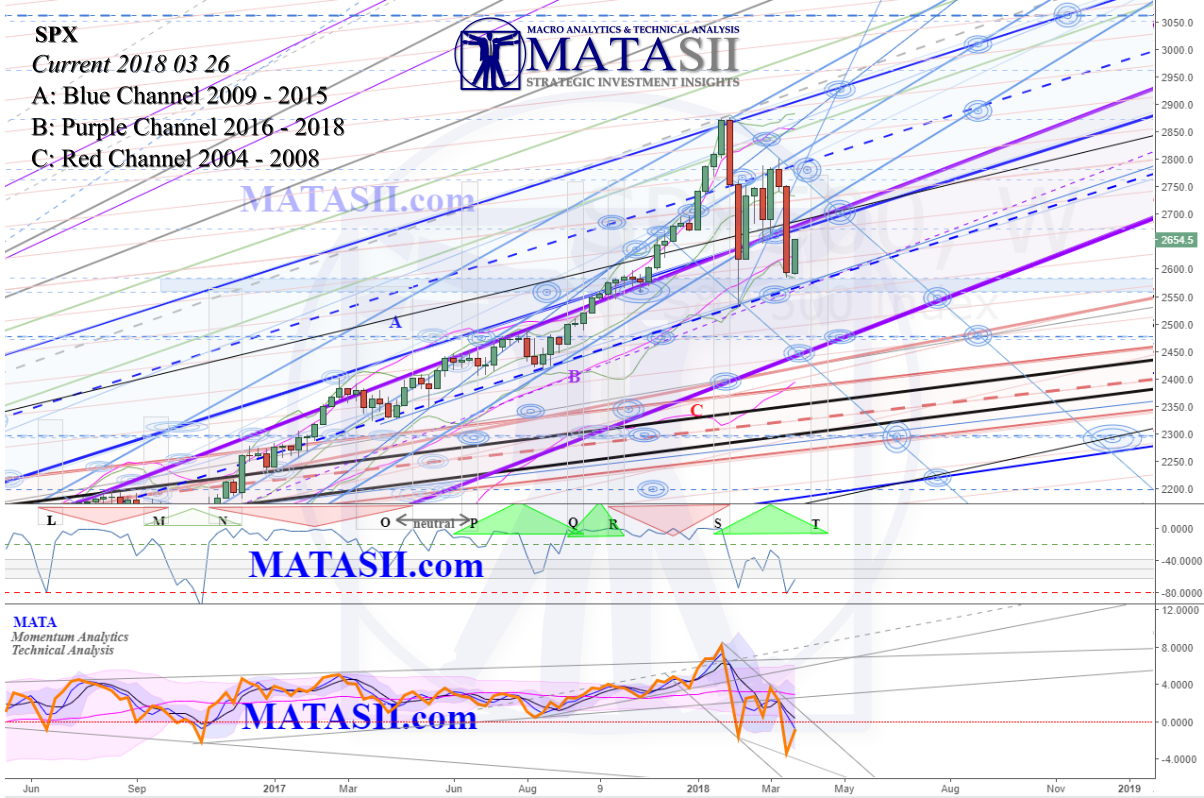 The next chart highlights the significant technicals to watch for market reactions. 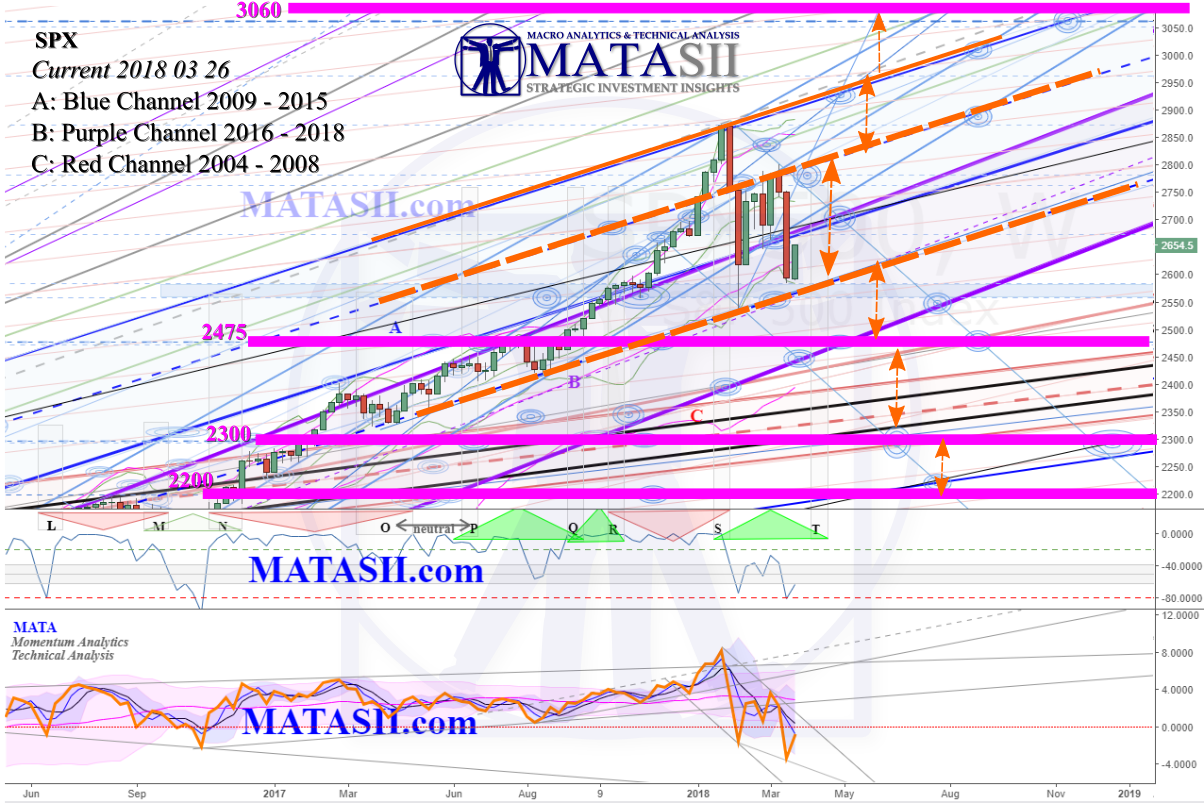 The 2475 level is general and should also include the s/r's from the purple and red channels.  IF we see a drop and support here, it could mean the corrective is over - or at least the first wave of the corrective...  A bounce back to the top resistance of blue channel A could be expected, breaking up above channel A would be confirmation of a new wave/trend up.

Dropping below the supports around 2475 could see further drop to 2300 - 2200, which is also back near support from the grey/black wedge shown on the first charts.  IF this fails then we have to suspect more than just a correction is occurring; but until then it is still just a correction inside the expanding wedge pattern regardless of how far down it is from current market levels.

We are watching for the market to hold and bounce around the 2475 level.  From there we will see if the correction is over, or if that was just wave A of a larger structure.  Either way a significant lift to slightly new highs is possible (back to channel A's resistance).  IF we don't see support around 2475, then we are looking to the larger grey/black wedge support for the next possible market reversal (back up).

Finally, one more look at the original Fib projections chart, with the above info in mind: 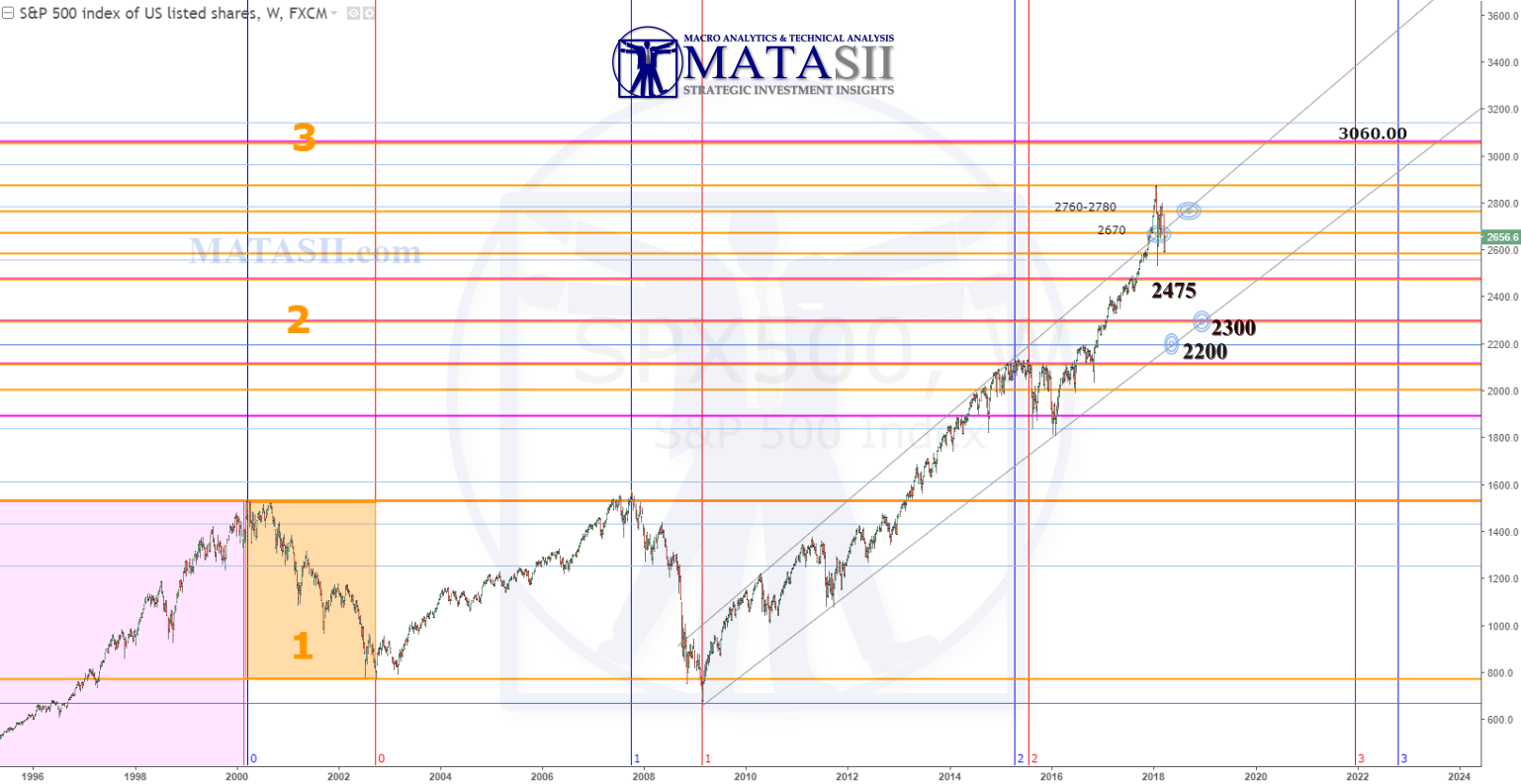 The significant market levels discussed have been annotated; potential targets exist where they meet the wedge's support (IF 2475 is broken).  Long term projection of 3060 is still valid, the issue is the PATH the market will take to get there.  As noted in Oct 2017 we can still expect to see more wild swings, potentially getting even more extreme.