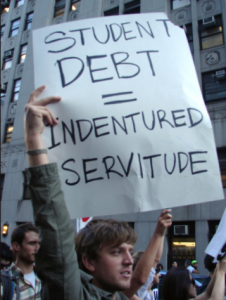 Many today strongly believe it is morally wrong to indenture students to the degree of liabilities presently required to achieve the education required to become a productive contributor within our modern society.

The question we need to demand answers to is why has college costs for students exploded upward, while salaries and job positions for graduates has not?  What is driving the relentless and inexplicable surge in the debt burden for students and their parents?

The well researched "Ivy League Inc" by my friends at OpenTheBooks only begins to scratch the surface of what is minimally a sham and may be better described as an orchestrated banking scam, not to dissimilar in design to the last financing bubble (i.e. the Residential Real Estate bubble in the last decade).  Let me take the discussion in a critical direction which they politically may have felt it to be too sensitive to broach?

First, to quickly grasp the underpinnings of how this sham has been symphonized it would help to frame our thinking around what might appear as two unrelated notions of how the capitalist system works (or more appropriately in the case of growing student debt - doesn't work!).

If three hungry people were stranded on an island, each having two damp dollar bills and one having the only coconut which he/she found - what is the price of that coconut?

This of course assumes the finder of the coconut is a former Wall Street banker. The likelihood is that the maximum price that can be extracted for that coconut (no doubt partially eaten by our banker) is $4.

If a government plane then suddenly appears and drops much needed assistance in the form of $5 of financial aid for each inhabitant (which they distribute equally) - How much is the coconut now likely to be worth?

I suspect the banker would extract closer to $14.

When a corporation has a product it prices that product based on the market.

In the first instance, if there are many competitors then the product must be priced relative to competitive pricing.

In the second instance, if there are relatively few well know competitors and the product is not yet well accepted in the market it usually will be priced against how much money it will save or how much it will increases revenues by. The corporation then prices their product against what the customer might be willing to surrender via their expected profit increases to secure the product.

Finally, when a corporation has no competition, a monopoly exists or "unwitting" demand exists,  then the corporation will "Price-to-Market".  That is to say it will charge whatever the market is willing to pay, can afford or can secure financing for.

As in a gold rush, miners in the field paid anything for the picks and shovels they needed to strike a claim. Similarly, today parents and students will pay anything for the "degree" they need to get 'a leg up' towards needed employment.

Let's start by considering the requirement by colleges for increased tuition levels. Do they actually need significantly more money? Where is the money going? 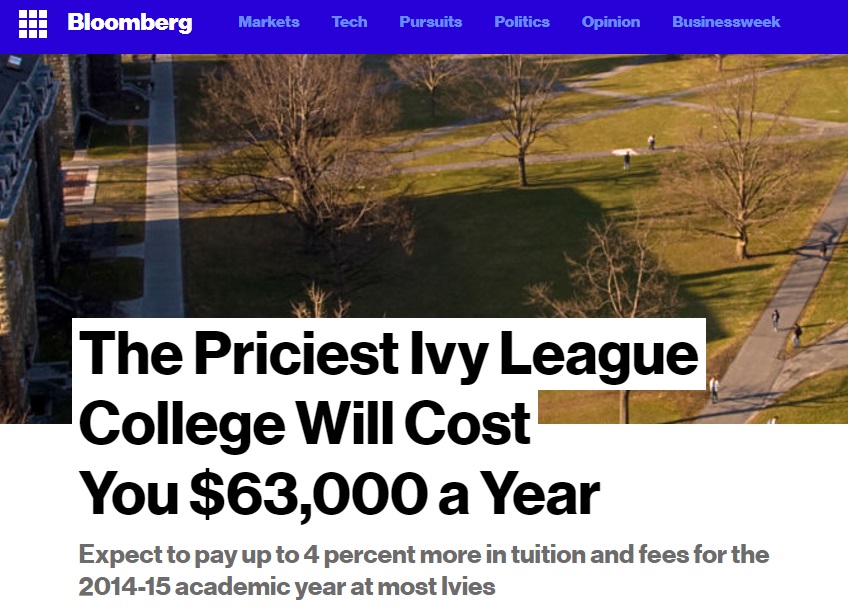 We decided to start by examining the Endowments of US Ivy League colleges and not surprisingly found that endowments are now measured in the billions of dollars. So why are college costs for Ivy League now being raised to $63,ooo/year? Why do these financially well positioned colleges need $63,000 per year from students?

If we use an average of $2M/student from the above table as endowment levels per student from Tier One colleges, we can quickly calculate that a minimal 5% annual return on endowment money would fund full scholarships for every Ivy League student and still leave $37K/year left over for operating costs, grow the existing endowment and fund new capital expenditures. However, that is not what is happening simply because there is no incentive for this to occur. There is just too much financial aid available

Colleges such as Harvard are incredibly doing much, much, better than our 5% illustration above and frankly better than most professional investors can understand to be possible in a QE/ZIRP environment!

Who is Getting An Overall 15% Yields in an Era of QE/ZIRP? 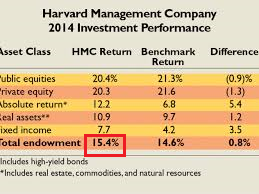 Consider the most recent Financial Statement of Harvard University (not to pick on Harvard as all the elite colleges reflect similar financial approaches). We see that the revenues from Federal Government sponsorship aid is equivalent to 60% of the revenue received from student income (remembering that in turn student debt is sponsored by government aid funding).

As we see below, Operating Revenue is dominated by Government funding, despite Harvard sitting on an endowment approaching net asset value of ~$40 BILLION dollars (and rapidly expanding). This asset base is bigger than most major banks in America.

Similar to our three deserted island inhabitants, when the government inserts more money or credit financing aid the price of the "coconut' or 'student tuition' goes up!

The "Ivy League Inc"   report summarized their investigations as follows:

What we found particularly amusing  is that Harvard's endowment had cashflow in 2016 of over $5.5B in trading changes in government repos and reverse repos.  Go figure how this is good for parents and their indebted children? What appears good for Harvard and the Government isn't necessarily good for students and parents.

We would truly like to see where all this endowment money is being invested, but of course like the teamster's union pension which under Jimmy Hoffa was invested by the 'mob' into funding Las Vegas, we will never know!  I am not for a moment suggesting anything nefarious is going on here but rather that angry and debt burdened parents have a right to know why tuition is going up despite the size of the endowments - if only for their own piece of mind.

You are probably thinking, well this may all be true for the elitist schools but my kids are going to colleges for normal kids, well down the the status ladder. They are  just trying to get a shot at a job.

What we need to fully appreciate is that the above directly affects everyone trapped in the American post secondary educational scam.

EVERYONE IS BENCHMARK PRICING

As many parents have learned, when the "Harvard's" raise their annual cost to $63K  every college then adjusts their price to close the available revenue gap in about a New York minute! As salaries rise at Ivy League schools, every college feels forced to raise salaries to attract Professors. Colleges feel competitively trapped and have little choice but to follow.

Of course all of this is nothing more than college's version of the corporate game of how to "Price-to-Market" which we discussed above as our second notion of understanding.

Whether competitive pricing or price-to-market the colleges know they have an insatiable demand for their product and can price accordingly. Its how the capitalist system works. It continues until demand falls off  because pricing becomes un-affordable. This cycle will not stop until the an affordability level is reached and the cost no longer merits the debt level. With shrinking availability of quality, well paying jobs in America, the perceived "value level" is becoming even higher.

Just so you don't think the villains here are solely the Ivy League schools, lets consider a personal example I encountered.

My neighbor's son was a terrible student and his father often forlornly related the fact that unless his under achieving son received  a full basketball scholarship (which was the only thing he had a talent for), college was probably out. The concern wasn't just his son's poor academic achievements, but also the overall financial cost burden to the family with other more academically inclined children.

However, when he graduated high school his father suddenly appeared over my fence to tell me the great news. His son had graduated and had been accepted into college.  As I was digesting the surprise and was about to ask where he had received the basketball scholarship from, his father proceeded to unload the big news.

"From where?" I blurted out uncontrollably.

His father sheepishly named a college I had never heard of and told me the annual tuition was going to be $45,000 but his son's annual funding would now only be $30K after taking off the $15K scholarship.  I knew at the time that $30K was about what a state college would cost. I therefore asked where the money was coming from to pay for the scholarship as the college he named didn't appear to have that sort of financial capabilities to reach down to his son's GPA level?

It turned out after some further investigation that it was partly some government funding to the college for the program his son was enrolling in.  The more seats they filled the greater the money flowed.

However, it was much more insidiously as I curiously investigated the situation further. It turns out it was nothing more than the college elevating their stated college tuition by $15K and then "giving it way as a scholarship". Effectively creating "funny money". It was an illusion.  It was nothing more than a marketing sham. However, it worked in filling student seats, even if some of these students simply weren't meant for college!

My neighbor was so proud of his son being awarded a scholarship that despite distance and other obstacles his son attended that college. Of course it didn't go unnoticed by other colleges that tuition was now $45K at a college not "nearly as good as theirs"  Academic communities are notoriously very competitive and highly status conscious.  They obviously reacted in a New York minute!

Will this young man will possibly graduate? He and his family will likely have $120,000 in debt.

The questions to be answered is; Will he be employable?  Get a job?  Will he and his parents ever pay off the $120,000 of debt?

Once the game above has begun, it quickly takes on a life of its own. Everyone immediately justifies why more "whatever" is needed and tuitions shoot up. Salaries rise. Benefits rise. New buildings spring up. Labs become more  opulent. Administration becomes larger. Today the games is being further enhanced with additional fees (fees for student activities, fees for athletics, fees for building maintenance, fees for libraries—even fees for graduation, the bills for which often arrive just as students and their families thought they were finally done paying for their higher education).

This chart which Charles Hugh Smith and myself circulated a number of years ago shows, by 2010 we felt it was out of control.  Little then stood in the way of college costs being pushed to student loans and government grants guaranteed by the Department of Education and then serviced by private unscrupulous service providers (some of which are only now being brought to court). 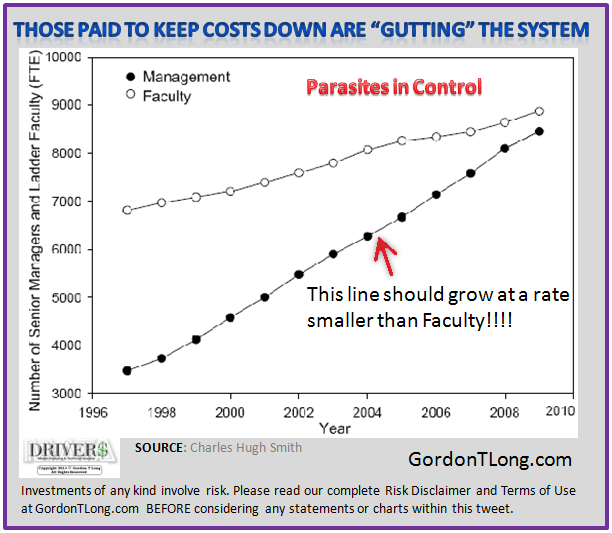 The real questions today is whether the education is any better and whether jobs are available for these now heavily indentured debt slaves!

If the answer is no, then the only winners have been those receiving all the endowment investments, college spending or higher government income taxes being paid.

With student debt now approaching $1.3T and over $600M now in "forebearance", there is little doubt who the losers of this sham are: students, parents and every US taxpayer.

It maybe that Tax Payers just don't know it yet!

IN DEPTH: THE REALITY OF A POTENTIAL US RECESSION IS RAPIDLY RISING HOW COLLEGE HAS BECOME A RACKET!