TOO BIG TO BAIL?

TOO BIG TO BAIL?

The Global Central Banks are all conducting their regularly scheduled meetings this week. There can be little doubt that inter-bank dialogue has preceded these meetings to coordinate some measure of needed but not yet undertaken, global monetary response. As we pointed out in this month’s video, the CoronaVirus’ economic impact has been allowed to overload the global economic ship to such a degree that it is highly likely it is now simply too big to be bailed out!
Though the US market is presently being supported by 5 stocks at their historic highs and now accounting for 20% by market cap, the global markets don’t reflect anything approaching this level of optimistic euphoria. We explore that below.
GLOBAL STOCKS
A Bull Trap may likely be the consequence of failed initial attempts by Monetary & Fiscal Policies of world governments and Central Banks to stop the financial fallout from the CoronaVirus triggered market crash. The actual size of bailouts now required on a global basis will soon become evident and the markets will react accordingly! 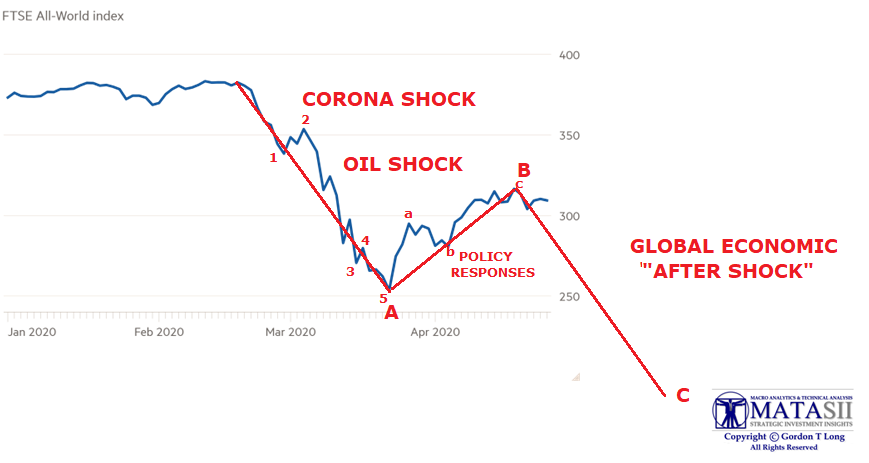 THE GLOBAL CENTRAL BANKS ARE BAILING DESPERATELY!!!
The major Central Banks have initially answered the call with bail-outs as can be seen in the chart below. Wall Street, the financial sector and obvious sectors such as airlines, hospitality, leisure etc. have benefited, but little Monetary actions in reality has made it’s way to Mainstreet America.
Fiscal Policy in America has enacted a 4 Phase approach totaling $3T but also little is reaching Mainstreet in any sort of timely & adequate fashion. Unfortunately, bureaucracy & graft as we detail in this month’s video, is the worst this writer has ever witnessed in 25 years of chronicling government policy.

Subscribe to view full post content
SUBSCRIBE
HOWEVER, THE SHIP IS TAKING WATER FASTER THAN GLOBAL CENTRAL BANKS CAN BAIL!
With the above said what happens when global governments must confront the realities of the following:
CAN GOVERNMENT DEFICITS ADDITIONALLY HANDLE AN ENERGY SECTOR COLLAPSE?
The oil market is broken because it was not a free market. It benefited from direct and indirect subsidies to create overcapacity and excess supply, and it has become a consequence of the excess in monetary and fiscal policies. The energy sector has become the clearest example of a “too-big-to-fail” mistake. Unfortunately, malinvestment will be -again-rewarded, and the oil market is likely to remain as inefficient and bloated as the coal and aluminum ones. There will be volatility. But the long-term value destruction of the sector, both from state-owned and private entities, will remain.
Expect governments and central banks to soon bail out the entire mal-investment binge of the past decade and, more importantly, incentivize even more overcapacity through massive stimuli, liquidity injections, and negative rates.
CAN GOVERNMENT DEFICITS CONTROL PENDING STATE, CITY & LOCAL BUDGET & TAX COLLAPSES?
CAN GOVERNMENT DEFICITS ABSORB UNEMPLOYMENT LEVELS OF +10% and higher through most of 2020?
CAN GOVERNMENTS SUSTAIN REDUCED CORPORATE TAX RECEIPTS FROM -10% to -25%through mid 2021?
….. and the list goes on as we only begin to comprehend the surfacing problems.

Subscribe to view full post content
SUBSCRIBE
THE FTSE ALL-WORLD STOCK INDEX (Less US)
Global Equity Markets as represented by the FTSE All-World (less US) have just registered a Technical Death Cross as they have not bounced nearly as much as the US S&P 500. With S&P 500 Corporations heavily dependent on International earnings we need to ask whether an obviously manipulated US Equity market can stop the next global profit driven leg down?
Markets will soon start worrying more about solvency than just liquidity and whether Return of Capital is more important than Return on Capital?
GLOBAL MARKET INDEX

TOO MANY TO SAVE? TWO FLAWED HOPES: LIQUIDITY & STIMULUS