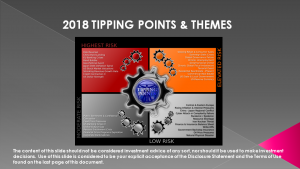 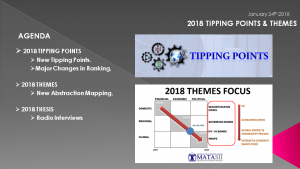 Going into last year we were tracking close to 33 Tipping Points. We thought 33 to be high, but somewhat expected the overall number to fall off going into 2018, with fewer but those ones likely being more elevated.

What we have identified however going into 2018 are 44 Tipping Points with 11 categorized as "High Risk".  High Risk has traditionally been approximately 5-7 in size but is presently now the largest we have had going back to the Pre-Dotcom Era when we first started tracking Tipping Points on a site specifically called "Tipping Points".

Our tracking methodology is unquestionably telling us that global and US risk is at extreme levels.  This doesn't mean that something is going to happen immanently, but is does suggest that a small spark could presently set off a major destabilizing shock. 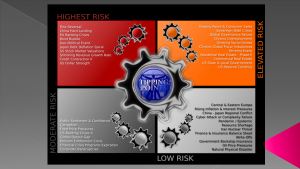 We have also seen a significant increase in the number of "Elevated Risks" shown here in the second column.

Those below the ranking of #22 have worsened but those above #22 have degenerated even more. Maybe more telling , is new Tipping Points have emerged and have been added to the 2018 list at already elevated levels. 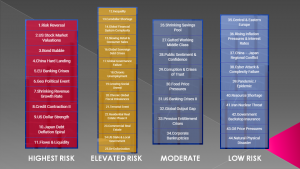 In the "High Risk" category we see that "US Stock Market Over-Valuations" are up significantly at a #2 ranking going into 2018. It was high at the beginning of 2017 and made the "high risk" category but is now a major destabilizing concern.

The policy shift of the central bankers is a new Tipping Point that has shot right up to the #11 spot. The reason is because the global financial markets are now so highly over-leveraged, from a protracted period of easy credit, that to start withdrawing the abundant liquidity is a serious issue the global markets which has never been attempted before. Few fully know what to expect!

The Federal Reserve has now started its "Normalization" program to reduce its Balance Sheet, while the ECB has initiated its version of "Taper" and both Japan and the BOE are reducing the rate of liquidity injections.

It has always been the role of central banks to take away the 'punch bowl' just as the party got going! But this has been a "humdinger" of a party, that has been going on for a decade now - specifically since the 2007-2008 Financial Crisis.  There is going to be significant, unprepared fallout if the central banks actually follow through with their announced policy guidelines. Only recently has the bond market began to actually believe the central bankers would. It is now starting to shake the Bond Market (our #3 Tipping Point). 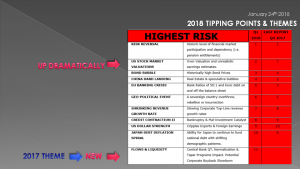 We see more clearly here with the "Elevated Risk" Tipping Points the number of new adds I was referring to! Or in the case of Terrorism it becoming more dominant globally!

I lot of our new Tipping Points were actually Themes we were watching in 2017 which have deteriorated and risen to the potential of being Economically, Financially or Politically destabilizing. We have a continuously slowing growth rate of the Global Savings Pool.   A new Tipping Point and now ranked #26, this problem will increasingly become a serious impediment for the financial markets in regards to securing of sufficient investment capital and maybe even more importantly - new unencumbered and non re-hypothecated collateral. This problem is central to the "Big Reversal" Theme we will talk about a little later.

The "gutting" of the working Middle Class has been a theme of ours for a few years now but we now see it to be a potentially de-stabilizing Tipping Point. The degree to which the US has become a sub-prime economy, the levels of household indebtedness associated with payday loans, home equity loans, student loans, credit card balances have left US consumers strapped for discretionary income.  In a 70% economy like the USA, this is a serious problem that could be even more aggravated with a cyclical overdue recession and advancing forms of job replacing robotic automation. The US consumer has long been the mainstay of the US economy and for that matter post WWII global economy.

A weakening US consumer is something the world has never experienced and is ill prepared for it! 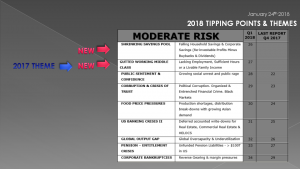 Not to go through all 44 tipping points, but I do think it is important to mention that items like Cyber Attacks and the resulting unknown complexity failures shown at #38 should not to be ignored. Often major crisis arise from something in common view but is taken for granted until it suddenly "tips" the scales and rapidly de-stabilizes markets and economies. 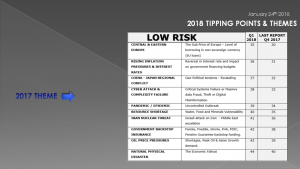 One of the many reasons that the Tipping Points are important to our work is that it forms the basis for launching our "Abstraction" methodology which is the foundation for our many investment Thesis' during the year. We share some of them with you as part of our Strategic Investment Insights (SII) thinking and Watch Lists. They are not recommendations but rather simply outputs from our research for your consideration.

We take the Tipping Points shown here on the left and try and identify patterns and relationship groupings. These we then over the course of the year attempt to Synthesis into ideas or concepts that may not be self evident.

Our MATASII Themes section, videos such as UnderTheLens & LONGWave, articles & papers, Macro Maps etc. are tools which are all part of the work we do during this process which we share with you through our ongoing postings.

The culmination is our Annual Thesis papers listed on the right.

This year it is "The New World Order" which we will talk further on in a few moments. 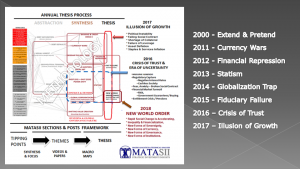 One of the many road maps we have laid out to assist us with identifying Themes to watch for is shown here.

This is a sequential road map with key blocks or trends we should be expecting. There is no time frame with it as it depends on the sequenced events.  We could spend a lot of time on this graphic, but we don't have time for that today.

To position what we should expect, it needs to be built on a clear framework of where we have come from. 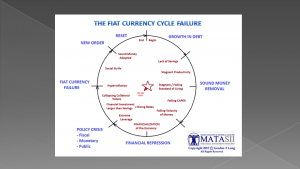 Let me show you another of our road maps. This one you have no doubt seen before. We have had it since the Financial Crisis when we first put it together.

The 2007-2008 Financial Crisis effectively took place in the upper left corner. To possibly be over simplistic, it was primarily US Housing Centric and Financial in nature. Yes, it had spillage around the world but it was primarily a Federal Reserve and US government problem.

Since the underlying problems we felt were not fixed at that time, we felt that the central problems would only grow and issues would become Economic in nature and much broader and regional in scope. By 2012 in fact we had massive banking problems across the EU, Greece and even down to Cyprus and the East Bloc nations - impacted by poorly capitalized and unsound European Banks.

It has been our view and continues to be that this is leading to even greater numbers of problems which will be both political and global in nature.

If we are correct then our Tipping Points and emerging 2018 Themes should be signalling this. 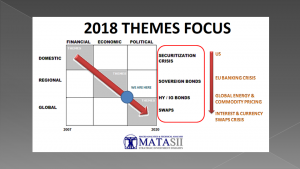 These are some of the key new Themes which our process has isolated as we begin 2018.

You will notice immediately that they are heavy in the Political and Global sphere - just as we expected they would be.

We didn't pull them out of the air or from the nightly news. They came from our 2017 year end Tipping Points and Themes that were growing throughout 2017. 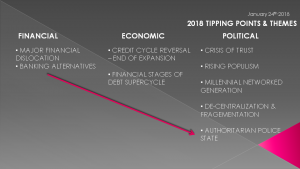 I have greatly simplified this matrix (removing a lot of the connecting lines) to isolate and illustrate what I showed on the previous slide.

We already have 5 Political Themes to start 2018 (we expect more to emerge) where they are signaling we can expect to see more and more reactive government policies which we labeled simply "What Ever It Takes" Policies with which to maintain the "status quo". 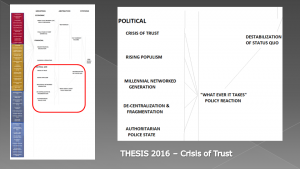 The Bank of International Settlements (the BIS) released a ground breaking paper last year which I labeled the "Big Reversal" in a Macro Analytics video I put out in the fall 2017 in collaboration with Charles Hugh Smith. I encourage you to listen to it if you haven't already. You will recall from a few charts ago the period of "rising rates" that we are entering and will be with us in an increasing fashion for the next few years. 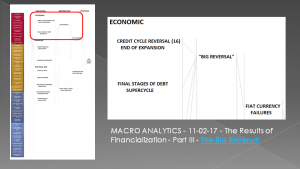 Investment will continue to grow but the rate will slow slightly driven primarily by the maturation of the capital intensiveness of Industrialization. Simply said, it takes less capital to start a factory than start a software company.

The growth rate of Savings on the other hand will also slow but at a faster relative rate. This is driven by an aging population and a slowing birth rate. Entitlement program promises are coming due, in a massive way and will need to be funded. There are $84T in unfunded and underfunded US government Entitlement requirements alone.

Supply generation of debt is going to balloon at the same time the funding availability for demand will be crimped. The result can be expected to be rising funding rates and a shortage of unencumbered collateral to support new lending and debt creation. 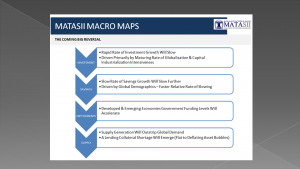 I refer you back to our cycle slide shown here and the red marker in the center for a reference of where we are. Right on track and to be expected!

I would like to close by mentioning we have just released our 2018 Thesis entitled "The New World Order". It discusses many of the trends currently underway that were themes in 2017. It attempts to outline what we can expect in the way of new forms of global: 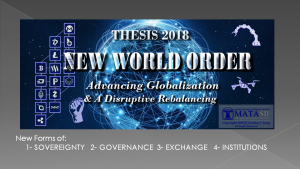 It tells us that the network is the way and it is changing the world in a manner few fully appreciate and completely grasp. Your future investments will be determined in a major way by this shift. 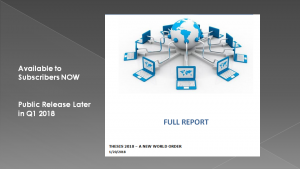 So, in closing, as I always do –remember: the answer will be to print more money.

It is the only answer politicians will ever agree on.

That is, 'Until No one Wants The Currency or Trusts It! 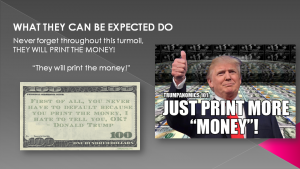