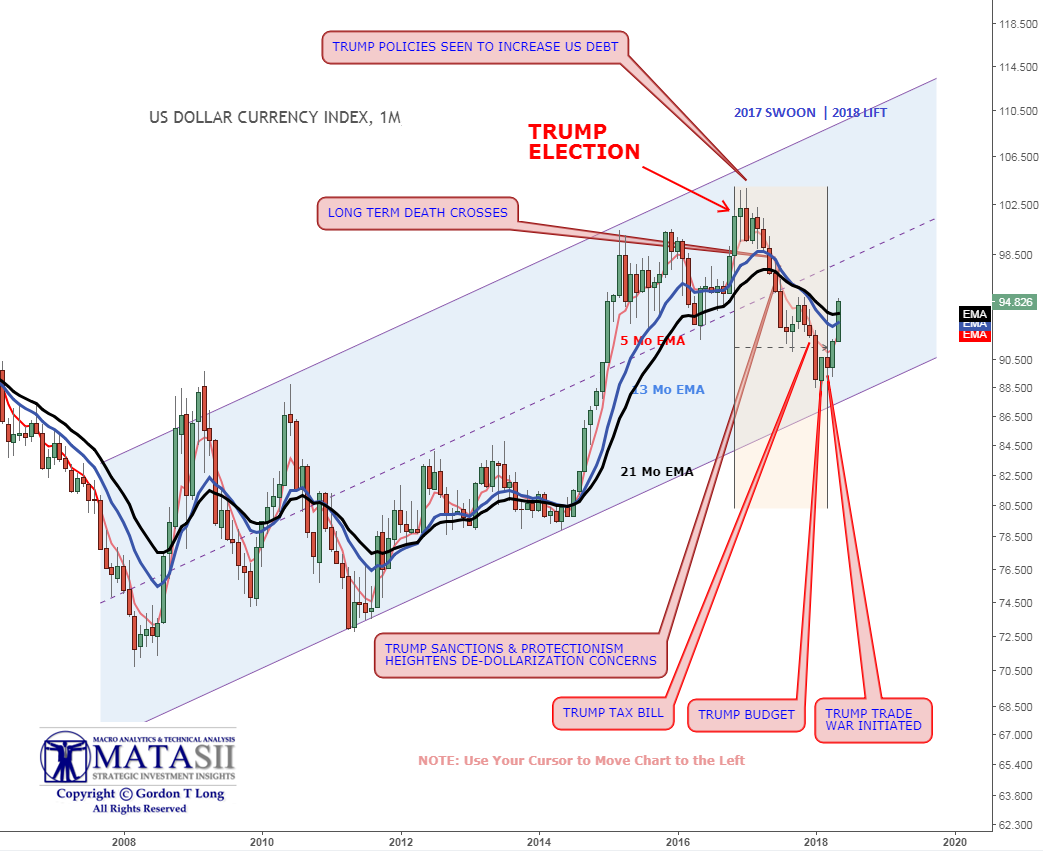 Well into 2018, a few FX traders are still struggling to understand the underlying bearish trend of the US$. How can it be that US yields are rising sharply, yet the US$ is so weak at the same time? The answer is simple: the US$ is not going down despite higher yields, but because of them. Higher yields mean lower bond prices and US bonds are lower because foreign based investors don’t want to buy them. This is an entirely different paradigm to previous years. Today, the US$’s weakness is linked to the renewed focus on the US’s twin deficits (the sum of its budget and trade deficits), with the US’s budget deficit set to deteriorate dramatically in years ahead. The mirror image to all of this is that the trade flow picture into Emerging Asia, Europe, Latin America, Russia, and Japan has been improving over the past year.

The US Congress’s bipartisan vote last month to increase spending by nearly $300-billion over the next two years comes on the heels of the $1.5-trillion, 10-year tax cut President Donald Trump signed into law in December. As a result, Wall Street strategists have slated over $1-trillion in new debt issuance this year alone to fund them. That’s only expected to grow as an aging population further fuels entitlement outlays while rising interest rates buoy Washington’s debt-servicing costs. The White House’s 2019 budget proposal released last month would raise the deficit to $984-billion, nearly double projections from last year.  To keep pace with this rising shortfall, net Treasury issuance to the public will average $1.27-trillion per year over the next five years, according to strategists at BMO Capital Markets. That compares to an average of $658-billion over the past five years.

Traders are taking heed, and zeroing in on America’s twin deficits as a likely catalyst of continued greenback weakness. Dollar bears hardly need more ammunition. The US$ has been besieged by a Trump administration that likes to jawbone the US$ lower, and contributed to the greenback’s -12% decline against a basket of currencies belonging to its Top-10 trading partners, since the start of 2017. While the two-year Treasury yield has continued its ascent this year — reaching 2.28% this week, for the first time since 2008 — its 120-day correlation with the Bloomberg Dollar Spot Index has tumbled to +23%, and down from an average of +57% in 2017. A reading of 100% would indicate the gauges move in lockstep, while minus 1 means they move in opposite directions. With the focus on the US’s Twin Deficits, FX traders say the US$ index <ticker USDU> is vulnerable to a further drop of -10% in 2018.

President Trump would like to see the US$ getting weaker against the Euro, China yuan, and Japan’s yen, believing that will be more beneficial for America. Trump was elected for many reasons, but growing frustration over the negative impacts of trade played a big part. He won the election in the manufacturing states hardest hit by import competition, including Michigan, North Carolina, Ohio, Pennsylvania and Wisconsin. And he won the highest percentage of union voters of any Republican president since Ronald Reagan in 1984.  More than on any other issue, Trump has a long-standing, consistent view on trade with the rest of the world: They are winning and the US is losing. He keeps score by counting up the US’s trade deficit. For the past three years, the score has been about the same – the US loses by more than $500-billion each year. The United States last ran a trade surplus in 1975.

Since China’s entry into the WTO in 2001 – its become the most formidable economic competitor the United States had even seen. With multi-national companies confident the United States could no longer threaten punitive tariffs on China, investment soared, and exports followed. Between 2001 and 2015, the annual US trade deficit in goods with China quadrupled from $83-billion to $375-billion. In the 2000’s, some 6-million manufacturing jobs disappeared, in part due to growing import competition from China.

Trump claims the trade deficit is a result of bad trade deals. For all of 2017; the US racked up a trade shortfall in goods and services with its global trading partners of $568-billion, a +12% jump from the prior year, – the widest annual gap since 2008, and a major embarrassment for President Trump. The trade deficit with China hit a record high of -$375-billion in 2017, defying President Trump’s repeated promises to shrink a number that he regards as a test of whether other nations are treating the United States fairly.

Meanwhile, the US$ is bleeding red ink. Tax receipts into the US Treasury in the first five months of the current fiscal year, from October thru February, were $1.286-trillion while outlays are $1.677-trillion. Receipts are growing an +4% per year, on average, while outlays are rising +7%, on average. Also troubling was the jump in interest on the public debt, which in the month of February jumped to $28.4-billion, up +10.6% from last February and the most for any February on record. In the first five months of this fiscal year, the interest cost of servicing the US-debt soared to $203-billion, up +8% compared with a year ago, and the most on record for any Oct-Feb period. The sharp increase comes as the US public debt rapidly approaches $21 trillion. And with the effective interest rate now rising with every passing month, it is virtually assured that this number will keep rising for the months ahead.

In turn, foreign investors are having great doubts about the wisdom of financing the US’s massive budget deficits, and as a result, the flows of capital could begin to swing to countries with exemplary fiscal discipline, such as Germany, Russia, and Switzerland, and on a comparative basis to the exceeding reckless US-government, bond markets in Canada and Great Britain look like better bets. 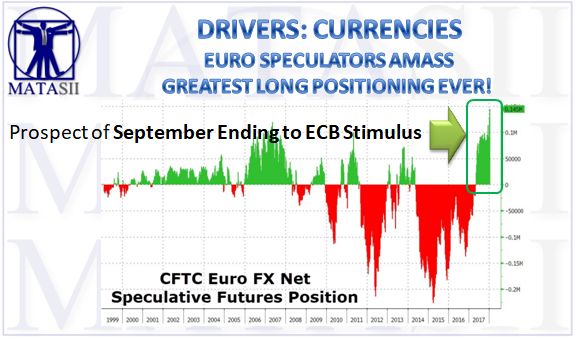 One week ago we showed just how severe the recent move in the USD, and alongside it 10Y Treasury yields - sparked by the April 17 PBOC RRR-cut -  has been...

... and how sharply it affected not only Emerging Market currencies, but also EM bonds and stocks.

And, courtesy of Deutsche Bank's Aleksandar Kocic, we also laid out the volatility-on/risk-off pathways that propagate as a result of the stronger dollar, resulting not only in a surge in risk asset vol and weakness across Emerging Markets...

... but threaten to undo the Fed's carefully laid plans of the past decade to create unprecedented stability across the yield curve (for more details please see "Why The Soaring Dollar Will Lead To An "Explosive" Market Repricing: A Flow Chart")

But what if the sharp dollar move higher is now over, and what if the market has already repriced the recent differentials in both capital flows and yields between the US and not just Europe but the rest of the world?

As BofA's Athanasios Vamvakidis writes in a weekend note, a big driver behind the recent dollar move, a sharp short squeeze may now be behind us as USD market positioning has now adjusted to broadly neutral levels.

This is the case both with respect to G10 and with respect to EM FX. In fact, according to Bank of America, hedge funds are now long the USD, while real money remains short the USD, with the two roughly offsetting each other in aggregate positioning measures.

This, to Vamvakidis, means that the USD needs a new push. or trigger, to rally further, but according to BofA, there are a number of candidates.

WHY THE US$ IS LIKELY TO HEAD HIGHER

Starting with the fundamentals, if US data continues outperforming Eurozone data, expect real money to cut their long EURUSD positions more, pushing the USD even higher. Indeed, last week's Euro-missing and US-beating PMIs supported the USD; meanwhile the whisper number among most analysts is that after two consecutive months of sharp misses, this week's NFP will surprise solidly to the upside.

This means that if the strong central bank USD selling which BofA has observed during the USD rally stops, the USD could appreciate to become more consistent with what data and rate differentials would already support.

But the biggest USD-wildcard is that we could start seeing large the US corporate profit repatriation flows that many have been expecting for this year and which have so far largely failed to materialize; in that case, the USD could rally even beyond the BofA baseline projection of 1.15 by the end of Q2.

Finally, among the more recent and unexpected developments, Italy has emerged as a major negative EURUSD risk, although it may become more relevant during the budget discussions this fall.

On the other hand, implications from trade policy uncertainty on the USD are less clear. This week, on June 1, the US exception from tariffs on EU steel and aluminum exports expires and the latest news out of Washington suggest it may not be extended, although the president is well-known to reverse policy positions on a dime as part of "negotiations."  Furthermore, the US is also looking into trade protection against car imports from the EU and other countries. Uncertainty about US trade protection against China remains, despite a preliminary deal early this week.

While it is true that trade war headlines have been generally negative for the USD this year, their market impact has been diminishing, and if anything could reverse, because according to Vamvakidis, should the US trade offensive turn against the EU in the weeks ahead, this will be more negative for EURUSD, given Europe's high dependence on exports.

Finally there is the question of just how high the USD can rise without terminally impairing EMs. Here, the situation continues to be fluid as EM central banks continue to stem weakness in their respective currencies through aggressive policy moves and verbal intervention.

Those two are relatively isolated instances of EM turmoil; the real question is what happens in Brazil and whether the recent selloff in the BRL and across Brazilian markets following last week's trucker strike (which prompted the government to deploy the military to break it up), followed up the upcoming oil-workers strike, will be enough to push the BRL to the critical level of 4.00, which as a reminder, is according to Bank of America the best indicator and only relevant "trigger" for broader EM turmoil: "EM FX never lies and a plunge in Brazilian real toward 4 versus US dollar is likely to cause deleveraging and contagion across credit portfolios."

Until then, however, it is smooth sailing for the USD, which today retraced all losses to close at a fresh 6 month high.

We have been showing this chart for a couple of years now and it has tracked extremely well. 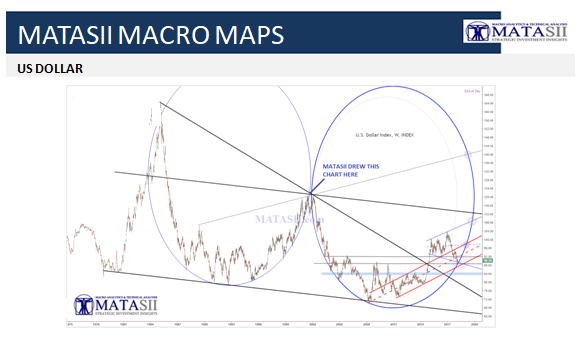 Here is the latest update..... 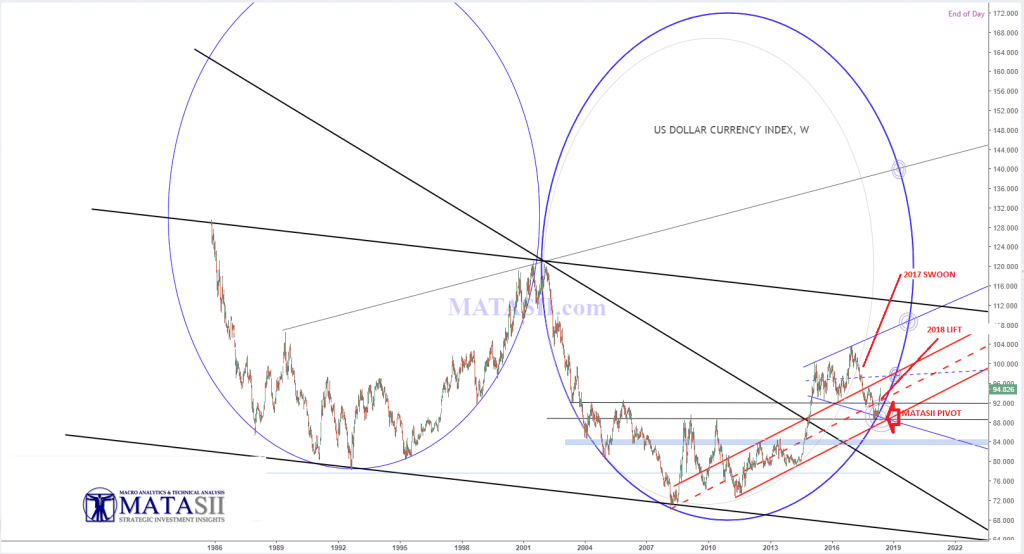 The US Dollar lifted almost precisely at it Technical Trigger point! Though the reason as a short squeeze and weakening Euro there is more going on here than just that. Near term as outlined above we should see further US dollar strength.

However, this will end in late 2019-2020 and the US dollar will likely begin a steady and persistent fall as "De-Dollarization" kicks in. THE US$ SHORT SQUEEZE MAY ONLY BE STARTING? WANT TO WIN DURING A PROTRACTED TRADE WAR? GO LONG THE DOLLAR!