A very, very, very, very slightly softer than expected Core CPI print (combined with broadly less-hawkish FedSpeak) sparked the biggest rally in stocks since April 2020, the biggest collapse in Treasury yields since March 2020 and the 3rd largest short squeeze ever! What does such a reaction tell you?

It told us that Yellen’s Plunge Protection Team (PPT) orchestrated exactly what we have been warning about – the temporary reduction of market pressures on the Federal Reserve’s Inflation fighting efforts without the Fed actually doing anything. Why do we sound so certain?

On Tuesday we read in the WSJ that CPI Swaps were suddenly falling. Additionally, so were Inflation Swaps. Our long term readers will recall when we were stunned to discover Inflation Swaps in May of 2021 and how they were controlling Treasury Break-Even rates and Real Rates within the Fisher’s Equation to control Treasury movements. Tuesday we discovered CPI Swaps. These were the Derivative instruments of choice for Yellen. We warned in our latest Newsletter (Yellen’s Forced Derivative & Contingent Liability Card) that Yellen would be forced to use the vast derivative markets to facilitate the Federal Reserve achieving its goals.

The post-CPI rally was the largest since the Fed announced its initial Treasury QE program in March 2009. We had a 4 sigma to the topside move which has only happened ~11 times in the last ten years!

The Initial “Fix” Is Underway … But Will It Be Sufficient?

Yellen and Powell’s Current Policy Strategies Will Only Delay the Inevitable Failure of Fiat Currencies and a Return to Sound Money.

The dramatic move from the minor M-o-M CPI reading achieved a dramatic price spike resulting in lifting the S&P 500 trajectory towards our previously held Double Combo (ZigZag) target. Coincidence? I don’t think so! There may be no conspiracy, but then there are no blatant coincidences either! 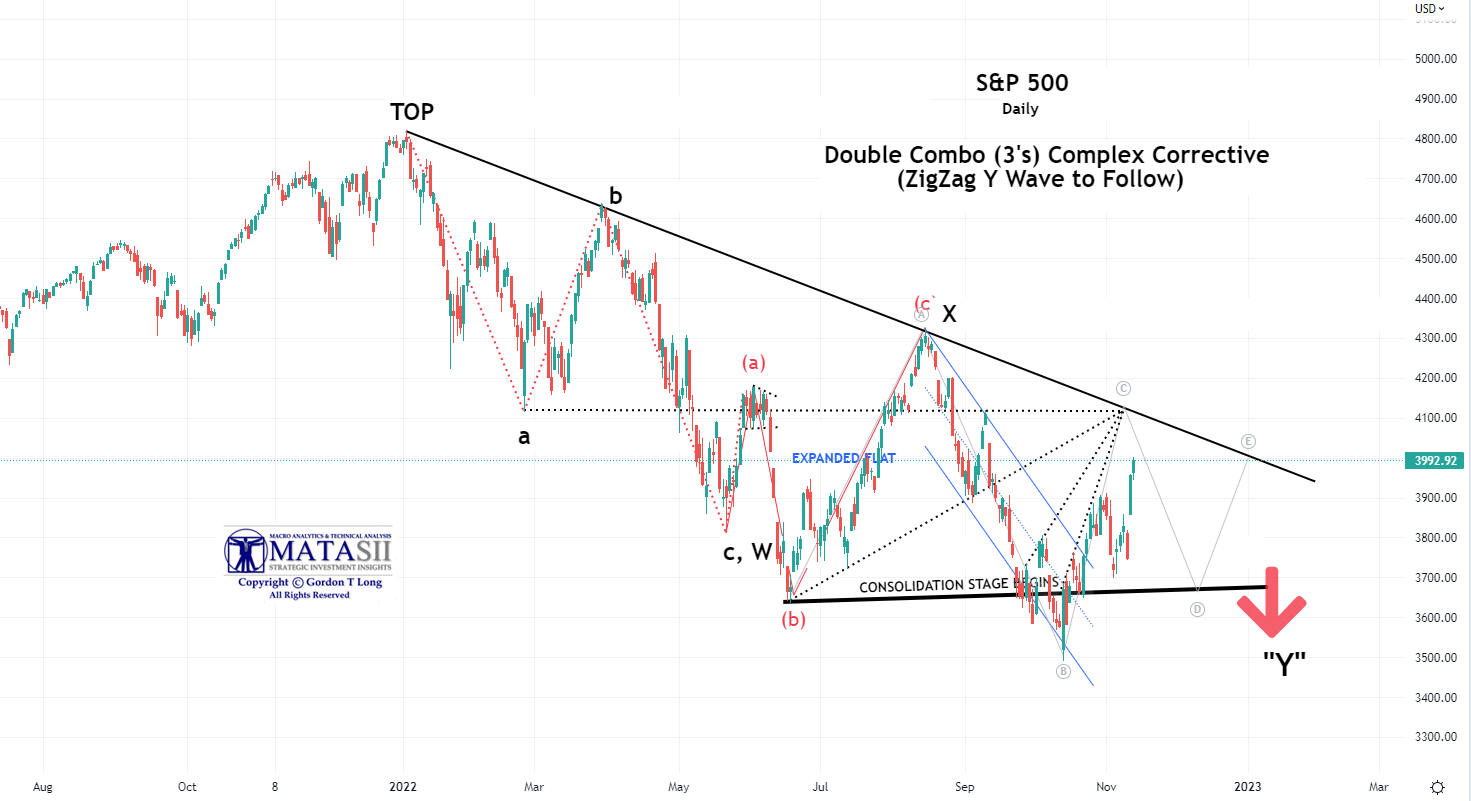 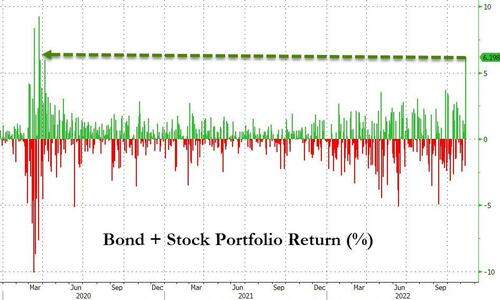 A SAVE FOR VaR PORTFOLIOS & RISK PARITY TRADERS

The massive rally in stocks and bonds sent the 60/40 portfolio up 3.4% on Thursday. Since 1988, there have been only seven other sessions when the portfolio jumped more than 3%, all happening during the 2020 and 2008 recessions. This was a big relief for exposed Value-At-Risk (VaR) Portfolios, being forced to further liquidate. (GRAPHIC: A BIG RELIEF FOR VaR PORTFOLIOS >>) 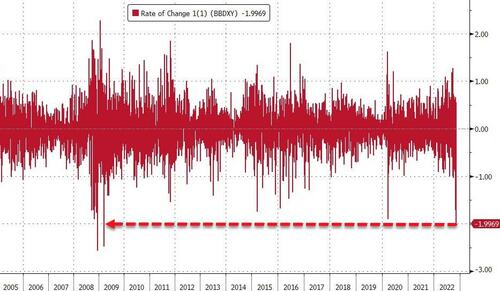 A SAVE FOR MERGING MARKETS & EURODOLLAR DEBT

The Bloomberg Dollar Index (a broader measure than DXY) saw its biggest daily drop since March 2009. This resulted in a major save for the troubled Japanese Yen, Chinese Yuan, the Euro, Eurodollar and Emerging Markets (GRAPHIC: GLOBAL US DOLLAR PRESSURES TEMPORARILY RELIEVED >>). 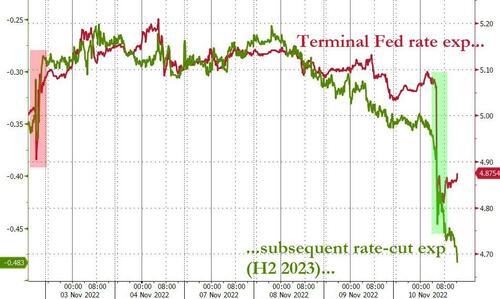 A SAVE FOR THE FED’S NEXT HIKE

The collapse in December’s rate-hike expectations priced out a 75bps hike completely and locked in the expected 50bps hike expected out of the December FOMC meeting.

The Terminal Fed rate expectations tumbled back below 5.00% (meaning there are 100bps of hiking left in the cycle) – back below post-FOMC statement spike lows. At the same time, rate-cut expectations for after the peak in H2 2023 surged to almost 50bps (adding an tire 25bps rate-cut today). Realistically the only way The Fed is cutting that aggressively is if the US economy is in recession, and that is hardly a positive for stocks. (GRAPHIC: FED’S TERMINAL RATE >>)

A SAVE FOR BIG TECH STOCKS

THIS WAS A MAJOR MARKET SAVE DAY

WHAT WAS THE ACTUAL CPI IMPROVEMENT?

Economists surveyed by The Wall Street Journal prior to Wednesday’s CPI release were expecting a 7.9% annual inflation rate and a 0.5% month-over-month core rise (excluding food and energy prices). Major players like Goldman however were expecting a slightly below-consensus of 0.44% increase in core CPI in October (vs. 0.5% consensus and 0.6% prior), which would lower the year-on-year rate to 6.46% (vs. 6.5% consensus and 6.6% prior).

What we can draw from this is that the market was almost desperate for anything resembling a topping in inflation. Yes it achieved it, but in the bigger picture it is almost noise! (Graphic above right)

FOLKS, WE ARE BEING FURTHER PLAYED AS EVEN MORE WEALTH IS EXTRACTED FROM SHORT SELLERS! 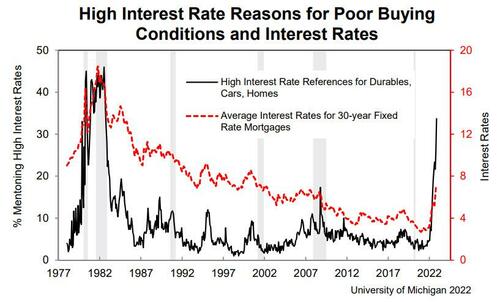 Fed chairman Jerome Powell’s favorite sentiment indicator is the U of Michigan survey. The preliminary November data shows that inflation expectations rose for the second straight month with 1Y exp up from 5.0% to 5.1% and 5-10Y exp up from 2.9% to 3.0%.

The survey showed that nearly half of consumers stated that inflation was eroding their living standards, leading many from lower- and middle-income families to change their spending habits.

“Higher-income consumers, whose outlooks were darkened by continued turbulence in stock and housing markets, will likely pull back their spending going forward. With overall sentiment remaining low, these factors highlight the risk of recession in the quarters ahead. Continued uncertainty over inflation expectations suggests that such entrenchment in the future is still possible.”

It is interesting to examine the cascading impact that occurred prior to and then within milliseconds of the CPI announcement.

With all the dramatic action it is interesting that the above resulted in a well managed shift to the lower trend channel of the US 10Y Treasury Note (TNX). What is also particularly note worthy is that Yellen & the PPT created an Island Formation Pattern. This typically marks a major trend reversal. It is going to be extremely difficult for traders to push Treasury rates higher with this pattern in place. It becomes a barrier assisting the Federal Reserve while at the same time limiting funding costs for the US Treasury. Well done Janet! 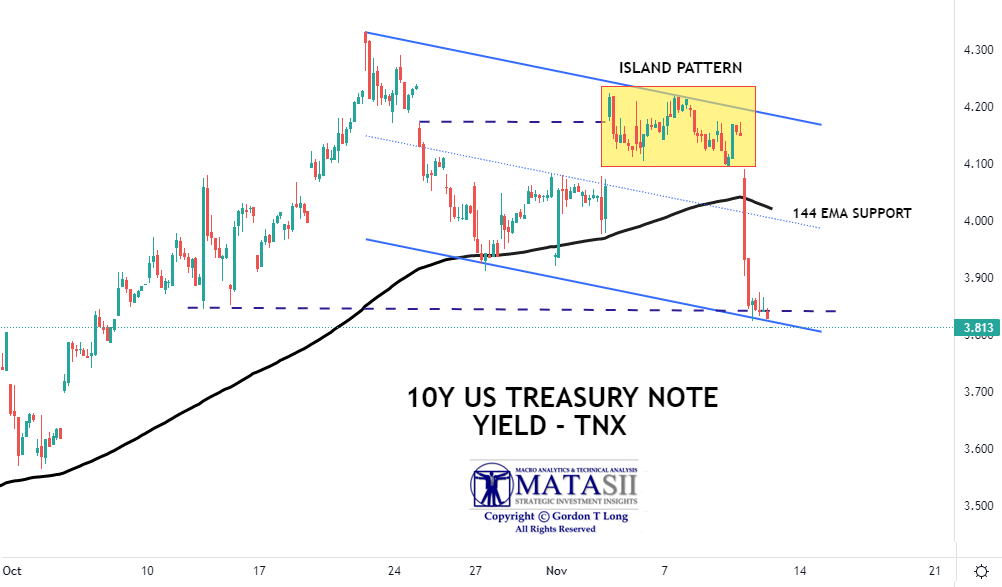 We have found the DJI:Gold Ratio chart to be very telling. 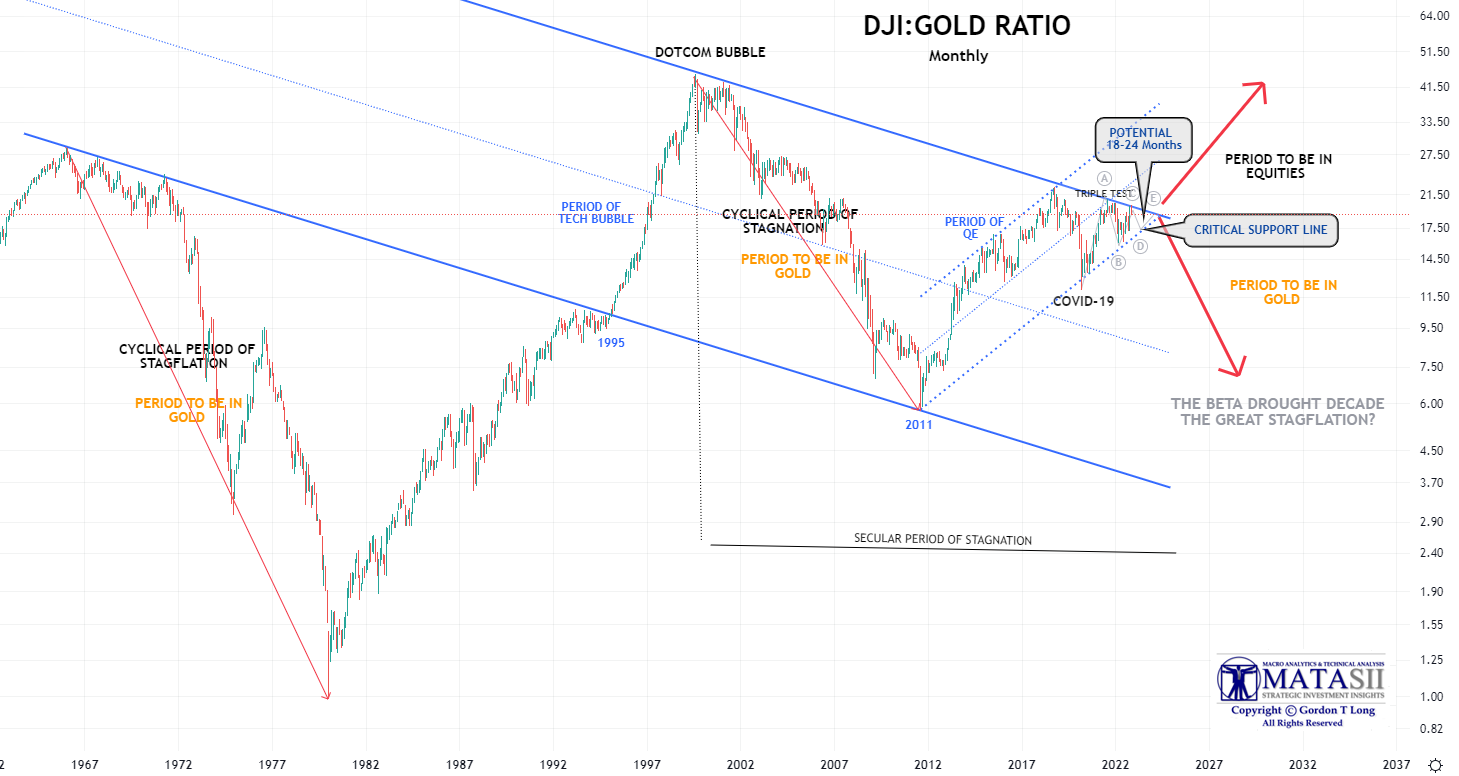 The two charts below strongly suggest that Inflation pressures may soon subside. This in no way suggests Inflation is going away but rather market focus may temporarily shift, possibly to disinflationary moves or deflationary pressures from a recession. This period could possibly allow the chart above to complete its current consolidation period before heading lower with markets falling and then gold being a strong investment. 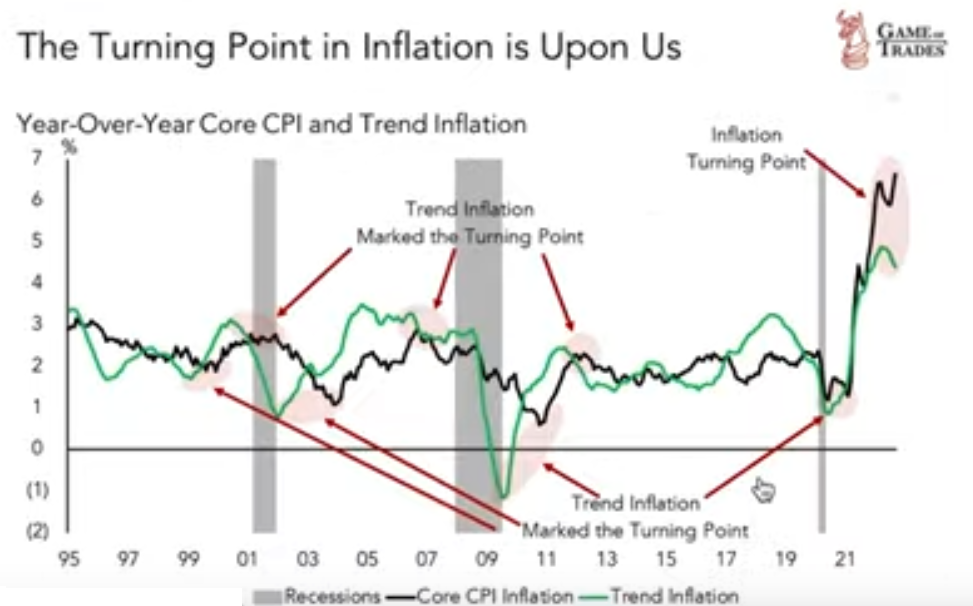 Inflation pressures appear to be reaching a point of topping and consolidation. This could lead to a longer period of higher inflation than we have been accustomed to. Maybe +4% or even 5%? 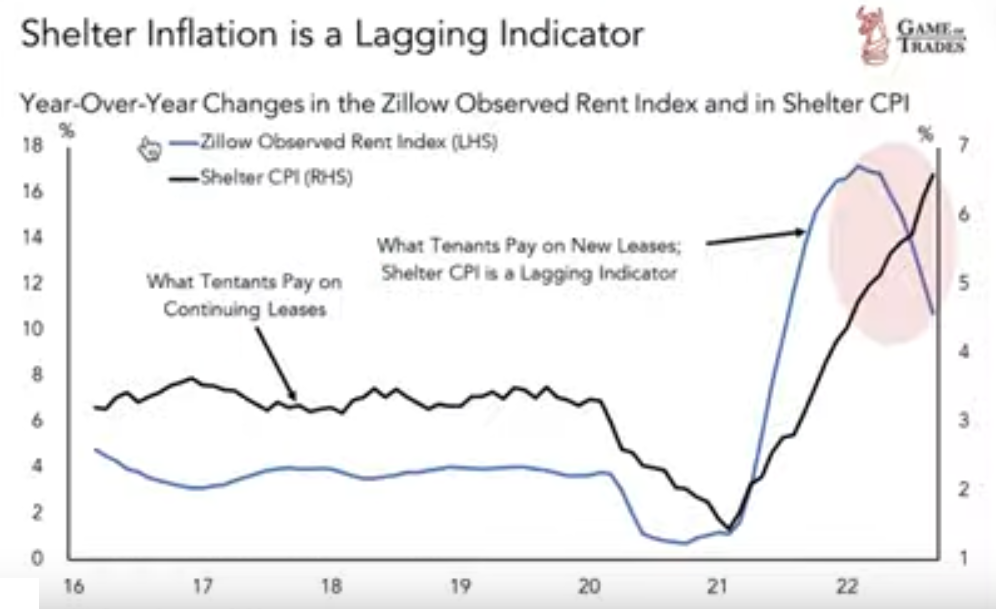 Below we isolate the individual charts for the DJI:Gold Ratio. 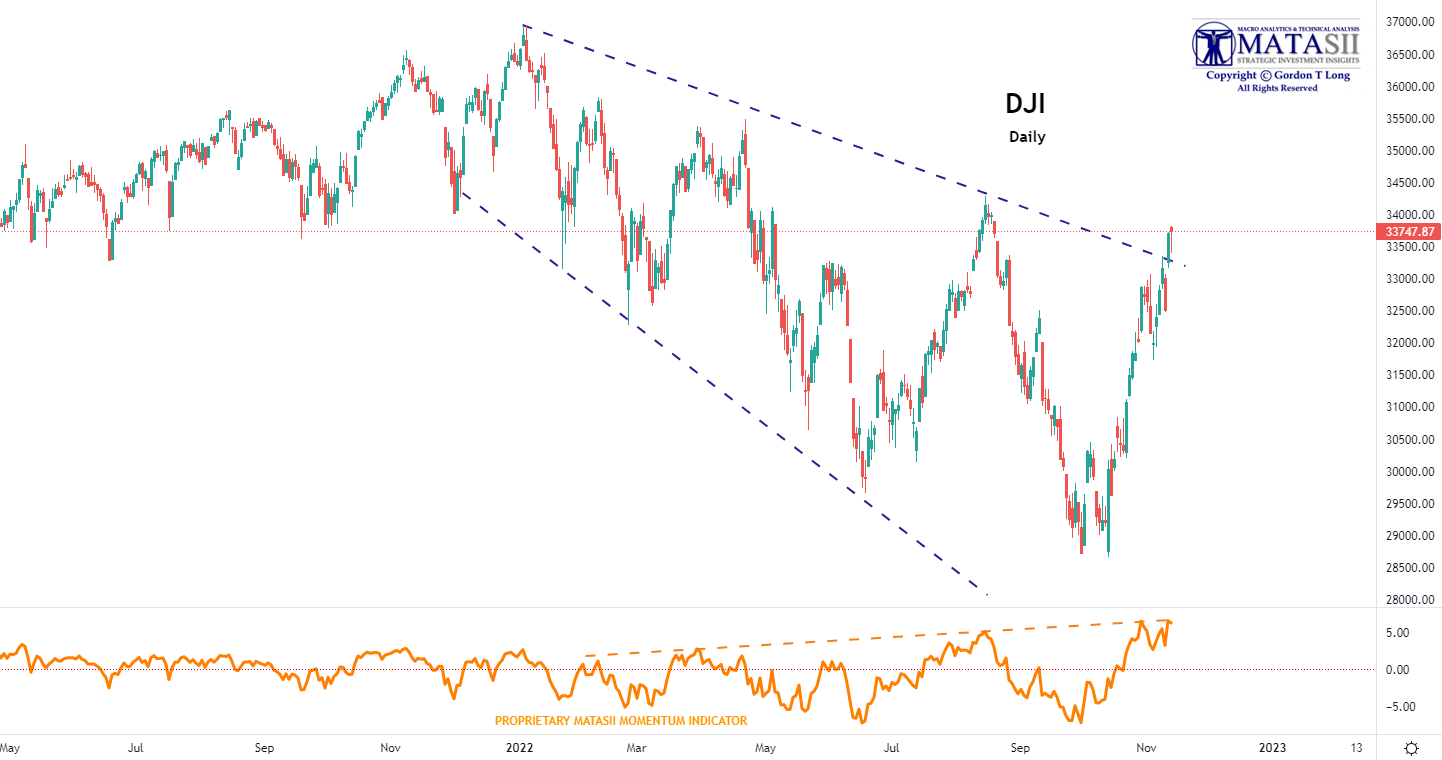 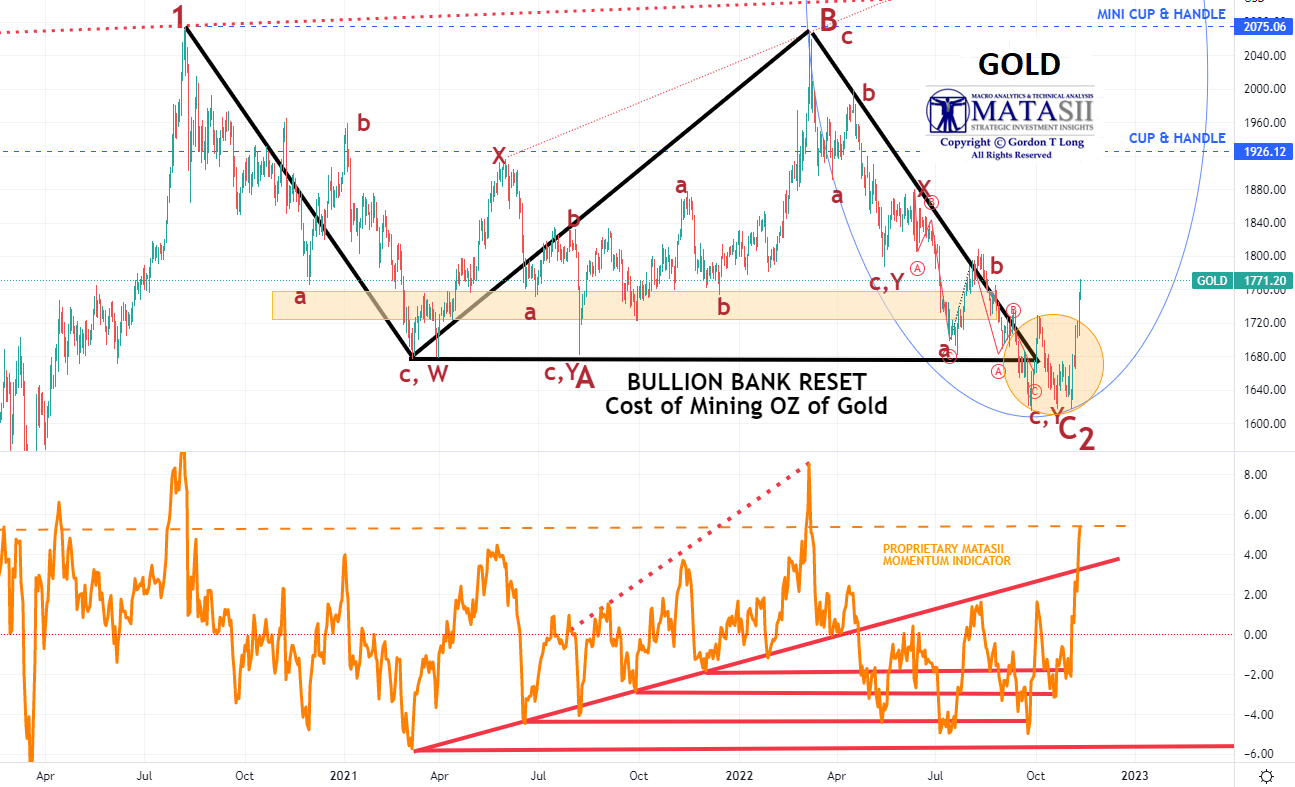 We specifically highlighted in our last newsletter what Treasury Secretary Yellen needs to do and is likely to soon undertake:

“She needs to more aggressively operate in the off balance sheet world of derivative. There is little doubt that is already occurring, but she is likely to be forced to take it to another level.”

We have witnessed with the massive surge in cross markets both domestically and globally that Treasury Secretary Janet Yellen has begun delivering on what we suggested she was likely to do!

A Fed reversal could happen more quickly than the market expects. Either way, equity investors should treat it as the false dawn it is. Firstly, financial conditions continue tightening for about five quarters after the first Fed hike. In the current cycle this would take us until the second half of 2023. Secondly, there’s a still greater squeeze in liquidity to come. The Global Real Policy Rate is still extremely negative and close to the all-time lows of -6% it reached in 1974, before it rose all the way to +3% by the early 1980s. Today it is at -4.4%, barely above its -5.6% nadir.

Overall, global financial conditions, as measured by the Global Financial Tightness Indicator, remain very restrictive, with no respite on the horizon. This will remain a poor environment for equities and other risk assets. Stocks may find themselves flipping from the inflation frying-pan into the recessionary fire (as the monetary easing the market has so desperately yearned for) sets the stage for a new act which promises to bring yet more misery.

THE WORST IS STILL IN FRONT OF US, 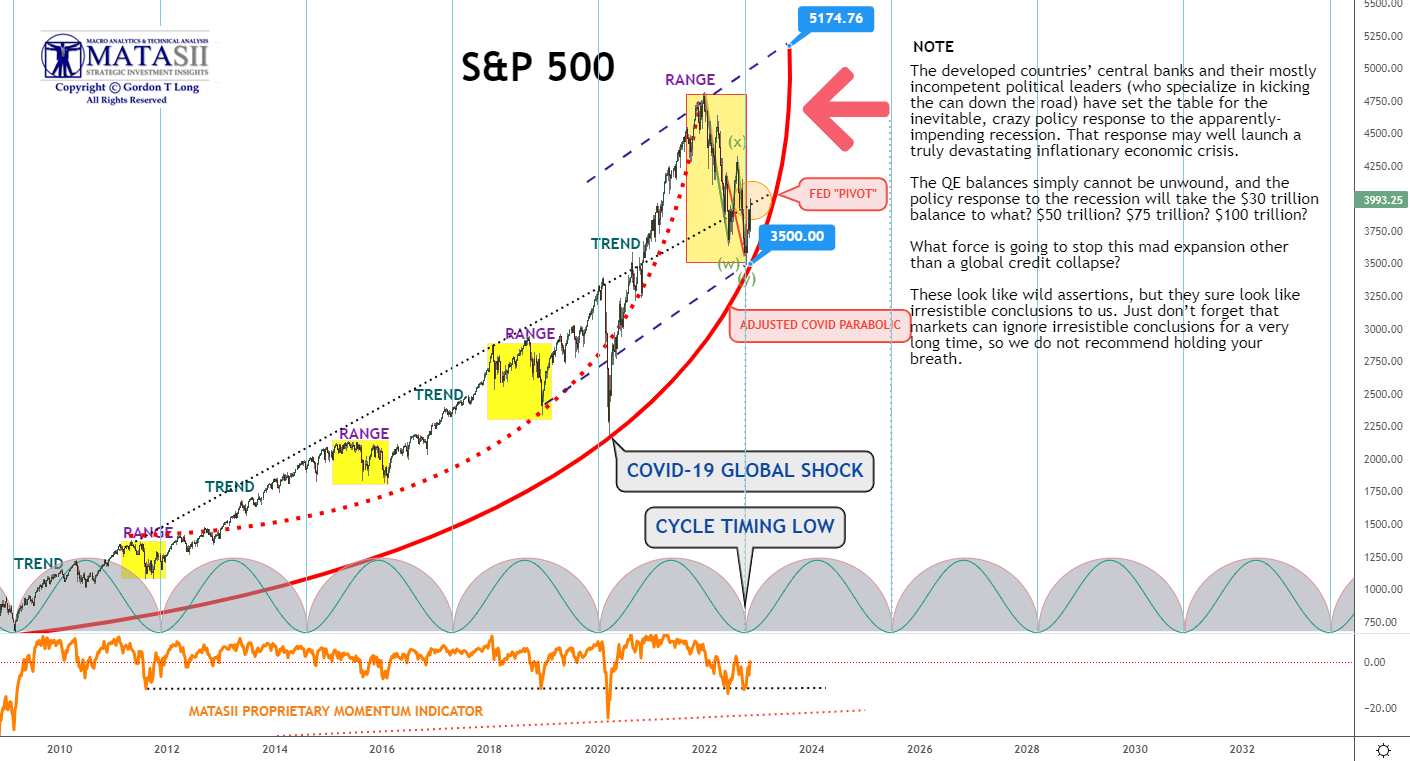