In the classic 1986 movie "Top Gun" there is a famous exchange between Tom Cruise playing a fighter pilot code named "Maverick" and his partner "Goose" when they excitedly shout - "He's Going Vertical. So am I! -- We're Going Ballistic, Go Get Him".  It turned out to be a memorable ride but unfortunately ended badly for our hero! Like Maverick's lesson in "Top Gun" this is not the time to be an AAPL 'gun-slinging' day trader!

Apple stock has doubled since December 2018 and CEO Tim Cook has increased Apple Value remarkably by over $1 Trillion since August 2011. 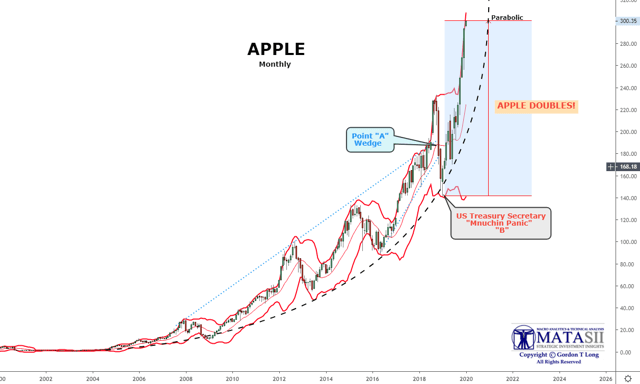 However, this has nothing do to with AAPL creating real value but everything to do with Index manipulation via today's Passive Index investing. We outlined what to expect in an April 2018 video as Apple lead the market with its massive and unprecedented stock repurchase programs or more appropriately labeled "Debt for Equity Swap".

When Apple was  about to plummet at point "A" (see chart below) we released this video on what was going on behind the scenes in the markets regarding the change in stock index reporting, shrinking stock float, availability and growing restricted stock pool, as well as the Private Equity / Hedge Fund / Algo games being played. It was quite clear based on this analysis that AAPL and the other FAANGS were headed higher. 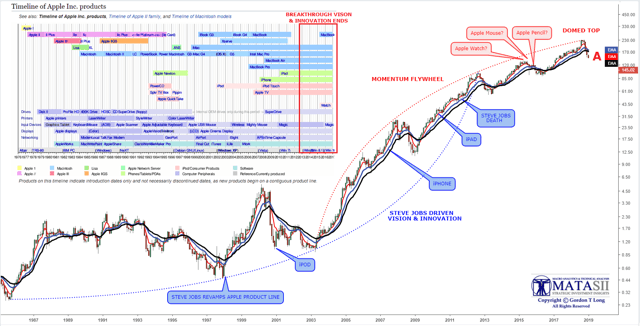 SOURCE:  Apple's Visionary Leadership And Rate Of Innovation Have Peaked

At point "B" (see first chart above) the US Treasury Secretary panicked during what became referred to as the Mnuchin Panic and called in the Plunge Protection team. We were off to the races because the leverage in stopping the market rout was moving the FAANGS. This hid the issues that we pointed out in a January 4th, 2019 Seeking Alpha article "Apple's Visionary Leadership And Rate Of Innovation Have Peaked"

Like our hero Maverick he had to head to the "hard deck" before eventually winning the dogfight.  That may be the strategy here also where the 'hard deck' is historically determined by the quarterly 15 MA.

Since 2007 $AAPL has poked hard above its quarterly Bollinger band, four times prior to this occasion. In each case it ended up producing a move to the quarterly 15 MA. That’s a four in four track record. The quarterly 15MA is currently at $167 and is rising and will be higher in 2020, but that’s the appointment $AAPL has based on history.

What this chart also shows is that these quarterly pokes above the Bollinger band can take 2-3 quarters, in 2012 it was 4 quarters. Given the earlier chart history it suggests $AAPL can see a sizable pullback in Q1, then race off to make new highs still, but then face the technical judgement of history. 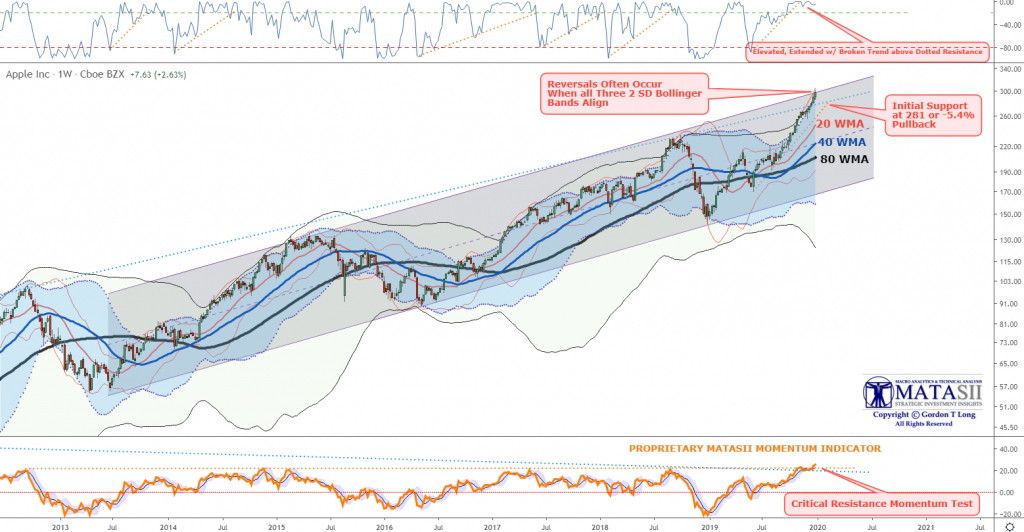 We suspect the worse case correction will be contained by the 23.6% Fib level in the area of $236 before heading higher to a possible "M" pattern double top. 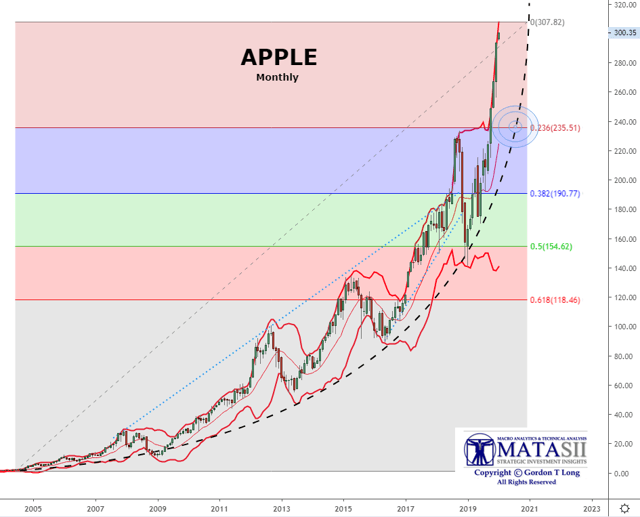 Apple is a great American story but trees don't grow to the sky and a parabolic rise historically always requires a consolidation no matter how good the story. Apples story has some gaping holes in it however, so the coming corrective stability test may be more severe than otherwise would be expected.  Knowing when and and how deep that corrective consolidation might be may tell us something about the overall market. 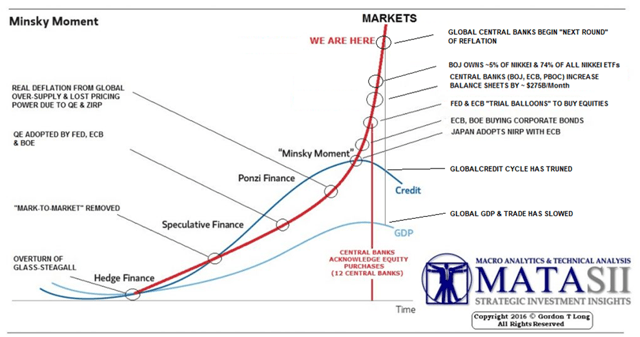