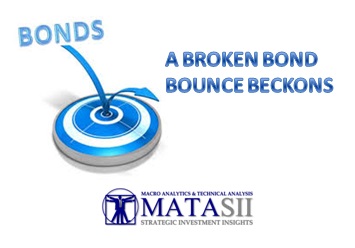 HISTORICAL CORRELATIONS GIVE US A CLUE TO WHAT MAY BE AHEAD! 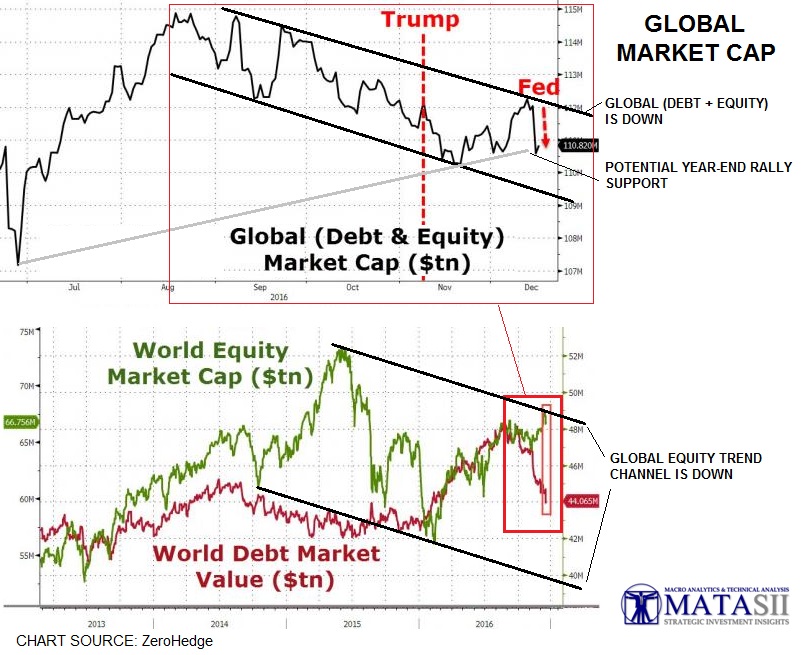 The old adage that the "Trend is Your Friend" has proven to be the one that separates the winners from the losers. The key however is whether you recognize the right trend!

We are being possibly lulled into a false perception and belief of how good things appear if we solely look at the US equity rally. Yes it is temporarily rising but the 600# Gorilla is the Global Bond market and major problems are still lurking.

The trend to focus on GLOBAL MARKET CAP:

The divergence between the Global Equity Markets and the Debt Market is significant and tells us there are major differing views on what the future has in-store. Divergences like this are always resolved - and usually quite dramatically.

WE HAVE BEEN HERE BEFORE!

The last time we saw such a divergence was in 2015 prior to the last Fed hike! We can see what happened on the right side of the graphic below. Stocks fell hard and bonds rose marginally. 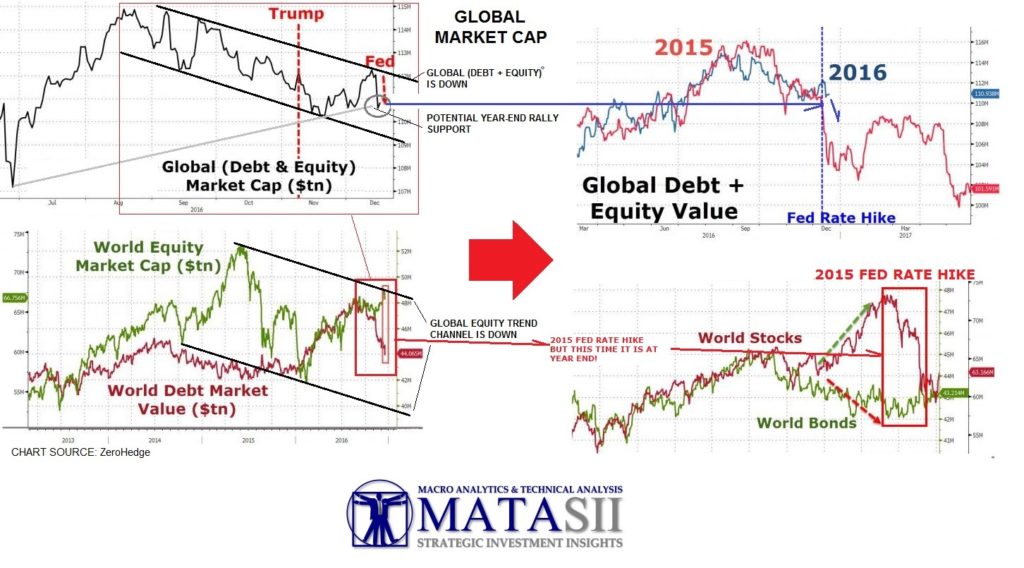 Knowing that the divergence will be resolved, the question is: 1- When and  2- How? Will Bonds rise, Stocks rise, to what degree and is what sequence?

We have an extreme overbought condition in the SPY:TLT ratio as well as a recent market pattern of correcting at year beginning. Both suggest something like the pattern highlighted in the blue box below may occur. 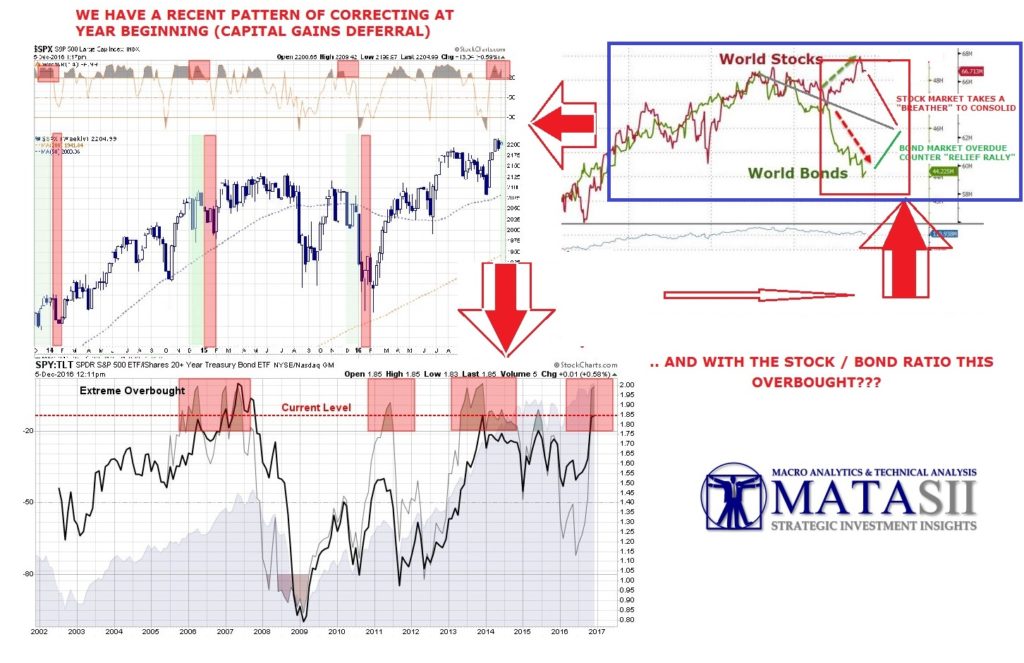 We can take some guess work out of this if we consider a critical correlation that historically normally occurs. 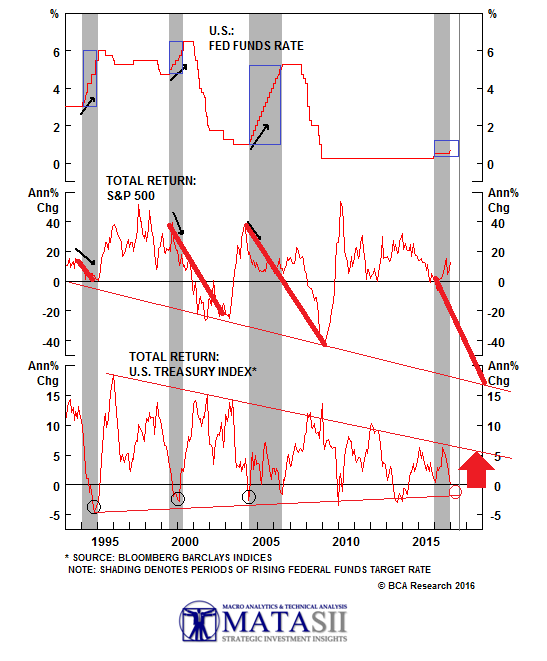 The conclusion we can draw is that the equity market can be expected to weaken and for money to leave the equity markets for the safety of the bond market. The timing suggests weakness in the equity markets in Q1 2017 and strength in the bond market in Q2 2017. Both could  happen earlier and closer together depending on what on known event triggers the correction in the divergence. Whether it is Year Beginning capital gains selling (tax deferral from 2016 gains) and re-positioning, problems in Congress getting fiscally conservative Republicans to accept Trumps fiscal spending plans, Geo-Political problems or China - time will tell.

A careful look at options trading shows a massive amount of call positioning now going on in the 10Y UST for February $126 calls. Major bets are being made for the bond market to bounce as 10Y UST yields fall from 2.55% to 2.00 to 2.05% by the third Friday in February. This would be about th time new congress would be debating the initial 100 day plans laid out by the freshly inaugurated Trump Administrations 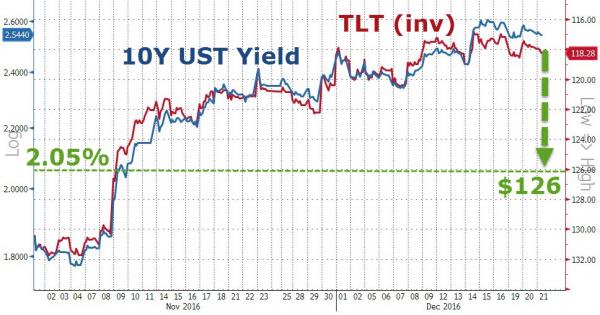 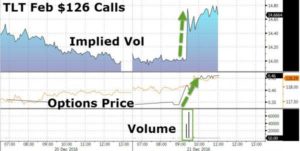 U.S. Economic Confidence has now surged to the highest level that Gallup has ever recorded. Additionally, the degree of Investor euphoria that has occurred since Trump was elected is something never seen in prior Presidential elections. 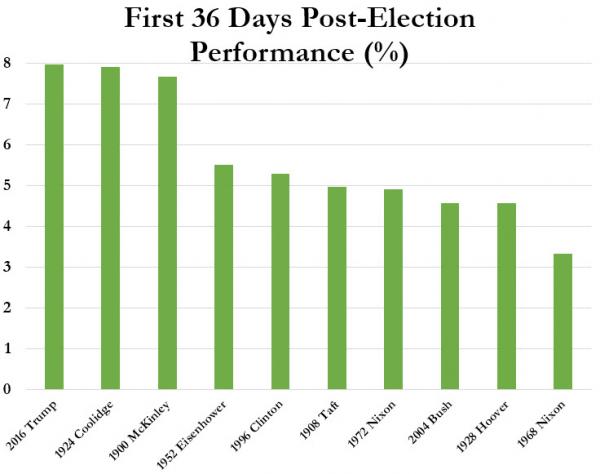 Like every good party it eventually ends and the hangover is likely to be a dozy!

Minimally we should see the close in our historical divergence. 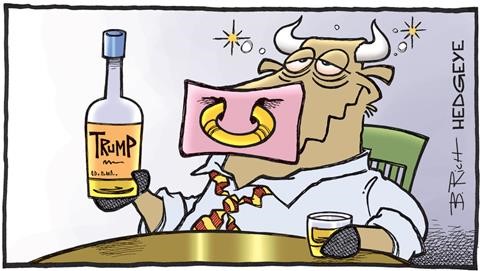 KEY FOCUS: WATCH THE RUSSELL FOR THE NEAR TERM END OF THE TRUMP RALLY KEY FOCUS: FIVE INITIAL THOUGHTS ON “TRUMPONOMICS”