EUROPEAN EARNINGS ARE UNCHANGED OVER THE PAST TEN YEARS!!

EUROPEAN EARNINGS ARE UNCHANGED OVER THE PAST TEN YEARS!! 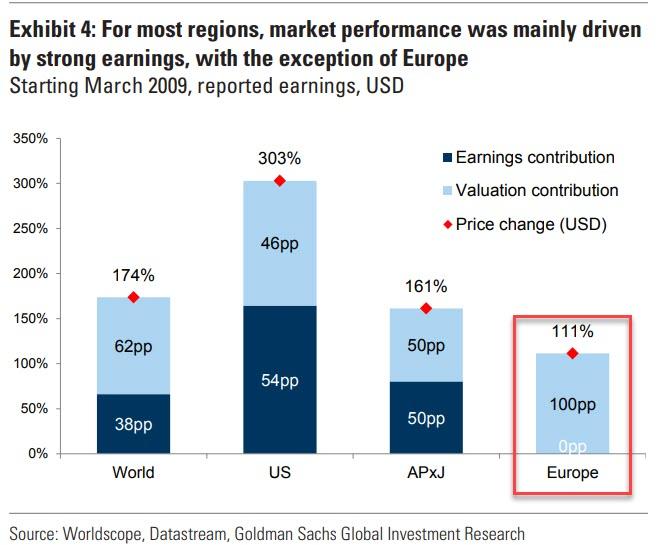 FULL SOURCE FOR FURTHER DETAILS:
Chart Of The Day: European Earnings Are Unchanged Over The Past Ten Years

Last week, Morgan Stanley's resident bear, Mike Wilson, slashed his EPS outlook for the S&P, declaring that an earnings recession has arrived, not just for Q1 earnings, where EPS are now forecast to decline 2.2% Y/Y, the first drop in three years, and how now expects full year EPS to grow just 1%, down from 4.3%, as the kind of hockey stick rebound expected by consensus in the second half is unlikely to materialize.

Which brings up an interesting point: how much of the global, central-bank induced bull market of the past decade has been the result of earnings growth, and how much due to multiple expansion?

The answer come for a recent report by Goldman, which warns that while a market crash is unlikely, returns going forward are likely to be low from here because valuations are now unlikely to rise and the bulk of prospective returns are likely to come from earnings.

Which goes back to our point: how much of the price change since the market lows has been from earnings, and how much is PE expansion? According to Goldman, in the US, the answer is roughly half and half - valuation expansion has contributed 46% to the price increase since the financial crisis which the bank says "owes to a great extent to years of falling interest rates and QE. This is odd, because during a normal bull market, and the past decade has been anything but, P/E expansion would typically drive around 25% of bull market returns.

Yet in a truly stunning observation, while in the US earnings have been responsible for roughly half of the 303% rise in stock prices, in Europe valuation expansion has been the sole driver of the 111% growth in equity prices. In other words, Europe has seen no earnings growth over the past decade!

In other words, whereas in the US the Fed was responsible for roughly half the upside in the market in the past decade (assuming low rates did not also benefit earnings, which they did) in Europe if it weren't for central banks, there would have been no market appreciation at all since the March 2009 lows.

Incidentally, this is not good news now that profits have peaked, and as Goldman concludes, "we see little reason for valuation expansion to be a major driver of returns from here. At the same time, our earnings forecasts remain low in every region, marking a sharp downturn from last year, particularly in the US."