In this month’s LONGWave we identify Commodities as one of many expected areas for the coming secular sector rotation to impact. We didn’t have time to further expand on the ‘why’ and ‘where’ in the video. As an addendum we would like to address this below.
INVESTMENT THESIS: COMMODITIES
PREMISE: POLICY REGIME CHANGE
FOCUS: COMMODITIES
As reported in the UK’s Financial Times:
Big banks, including ABN Amro, ING and BNP Paribas, are either pulling out of commodity trade financing or scaling it back. This will leave a funding hole for farmers, agricultural producers and distributors, as well as grocery chains and other small and medium-sized companies that represent crucial parts of the global food supply chain.
The problem is like a gigantic iceberg under the surface of financial markets, one that we can’t yet see but are nonetheless headed for, according to Michael Greenberger, a professor at the University of Maryland’s Carey School of Law and former director of trading and markets at the US Commodity Futures Trading Commission.
He is worried that if second and third-tier agricultural companies – who depend on such financing for things like shipping or manufacturing but also to hedge prices in a volatile industry – cannot get funding or are forced to pay higher rates to shadow lenders, we could see a food price surge. We might also see greater corporate concentration and increased market risk, he notes, possibly within the next couple of months.
OPPORTUNITY: “SOFT COMMODITIES”
ADDENDUM TO THE SEPTEMBER LONGWave VIDEO
CENTRAL BANK & GOVERNMENT POLICIES ARE TRAPPED BY THE REALITIES OF:
COMMODITIES
A SUSTAINED LACK OF INVESTMENT IN THE INFRASTRUCTURE TO SUPPORT COMMODITIES HAS RESULTED IN SERIOUS INDUSTRY WIDE DECAY
“SOFT COMMODITIES” IN THE FORM OF AGRICULTURAL FOOD RESOURCES 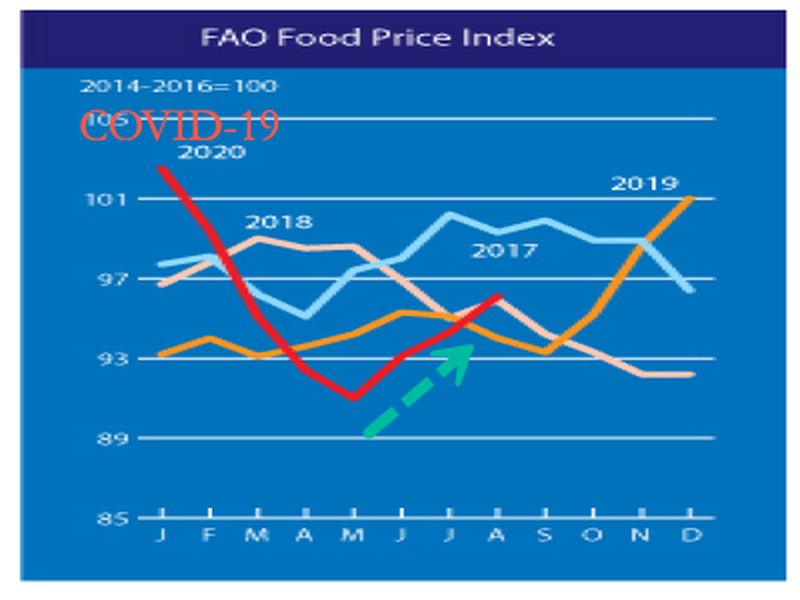 There is an existing trend that is gaining steam post-Covid-19: the biggest companies are getting even bigger. This was true in agriculture, as in so many sectors, long before the pandemic hit. But Covid-19 has starkly exposed the vulnerabilities of monopoly power in food, creating supply gluts in some areas and shortages and higher prices in others. A handful of large companies have controlled areas such as meat packing and grain production, often doing business with only one type of distributor – a restaurant, for example, but not a grocery store. The result was certainly an economically “efficient” system, but one that turned out to be quite fragile as well.
Experts believe that the shifts of big banks away from trade finance could expose more such fragility. “The first order of worry is being able to get a futures contract – will small producers have to pay a lot more for one? Then, if the contract goes against you, can you make your margin payment?” If some of them can’t, it is easy to imagine another disruption in supply chains creating more chaos and food insecurity later this year. That could possibly provoke market volatility if enough highly leveraged agricultural companies went out of business at once.
Not only would the demise of smaller farmers have a knock-on effect on other businesses, including packaging, manufacturing and transport, but their debt – particularly if packaged into risky secularized products – could become a broader market risk.
At the very least, given higher lending costs for a large chunk of producers, higher food prices would seem a foregone conclusion. That won’t be happy news for the legions of unemployed consumers struggling to make ends meet. This underscores a key point – the ramifications of commodity price disruptions are very often not just economic. They become political, too. Social unrest and even revolutions often start when the prices of food and fuel spike. Bread riots were one of the catalysts for the Arab uprising of 2011. In the US, the oil price spike that began the same year led to senate hearings about whether the problems of the 2008 financial crisis, including risky trading on the part of big banks, had yet been solved.
Here’s a breakdown of the latest Food and Agriculture Organization (FAO) of the United Nations report:
The FAO Cereal Price Index rose by 1.9 percent from July, averaging 7.0 percent above its value in August 2019, with coarse grains leading the rise. Sorghum prices rose 8.6 percent – and stood at 33.4 percent above their year-ago level, mostly on the back of strong import demand by China. Maize prices rose 2.2 percent amid concerns that recent crop damages in Iowa would impact supply. International rice prices also rose, underpinned by seasonally tight availabilities and increasing African demand.
The FAO Sugar Price Index rose by 6.7 percent from the previous month, reflecting reduced production prospects due to unfavorable weather conditions in the European Union and Thailand, the world’s second-largest sugar exporter, as well as strong import demand by China.
The FAO Vegetable Oil Price Index increased by 5.9 percent, led by firmer values for palm oil especially, but also soy, sunflower, and rapeseed oils. The moves mainly reflect prospective production slowdowns in leading palm oil-producing countries amid firm global import demand.
The FAO Dairy Price Index was virtually unchanged from July, with cheese and whole milk powder quotations declining amid expectations of ample seasonal export availabilities in Oceania, while butter prices rose due to tightening export availabilities in Europe in the wake of the August heatwave reducing milk output.
The FAO Meat Price Index was also almost unchanged since July – although down 8.9 percent from August 2019 – as the effect of lower import demand for bovine, poultry, and ovine meats was offset by surging import demand for pigmeat from China. -FAO