TRANSCRIPTION: IN-DEPTH – A SPECULATIVE LOOK INTO THE FUTURE

TRANSCRIPTION: IN-DEPTH - A SPECULATIVE LOOK INTO THE FUTURE

Warren Buffet likes to use a broad view of equity assets compared to the GDP of the country. 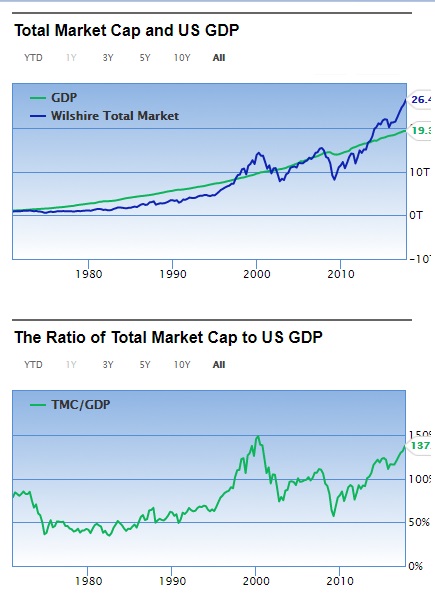 For years I followed it closely to spot risk situations similar to this occurring. 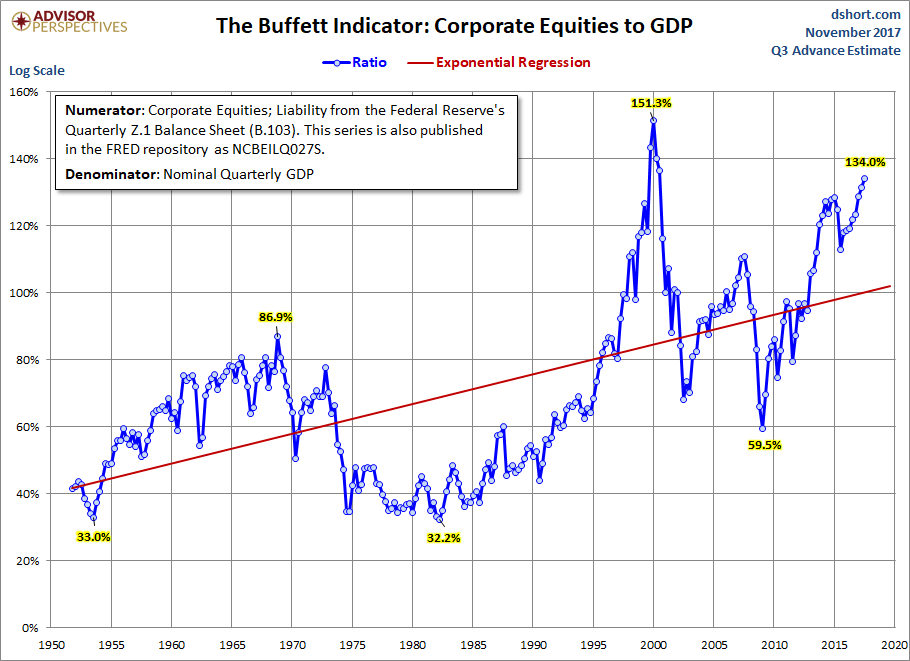 I found it effective but began to prefer the comparison of Household Financial Assets compared to Disposal Income.  In prior years both kept me from being caught off guard by major directional shifts in the market. 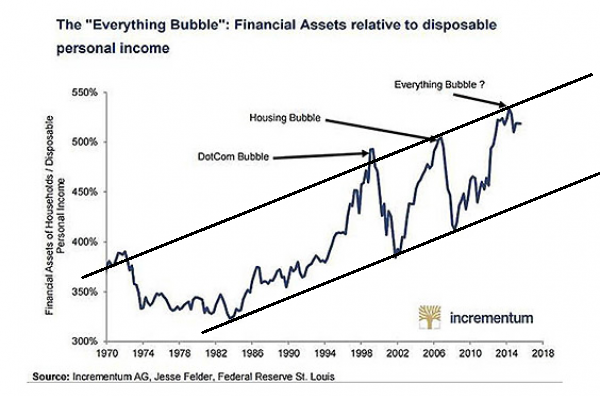 With the further rapid advancement of Globalization, Financialization and Coordinated Central Bank Monetary Policies (as in Bernanke's "Enrich-thy-Neighbor") I have been steadily shifting my key warning indicators to having a more global weighting.

Specifically, I began tracking what I saw to be the major global drivers.

Before I show you this and what it appears to now be signaling, let me first place some of this in context.

Remembering, that the "King Kong" of trading markets in the world is the Currency Market (at over $5 Trillion per day), then followed by the global Debt & Credit Market measured in 100's of Billions, then in the rear by Equity & Commodity markets measured in the many Billions.

As such I have found that: 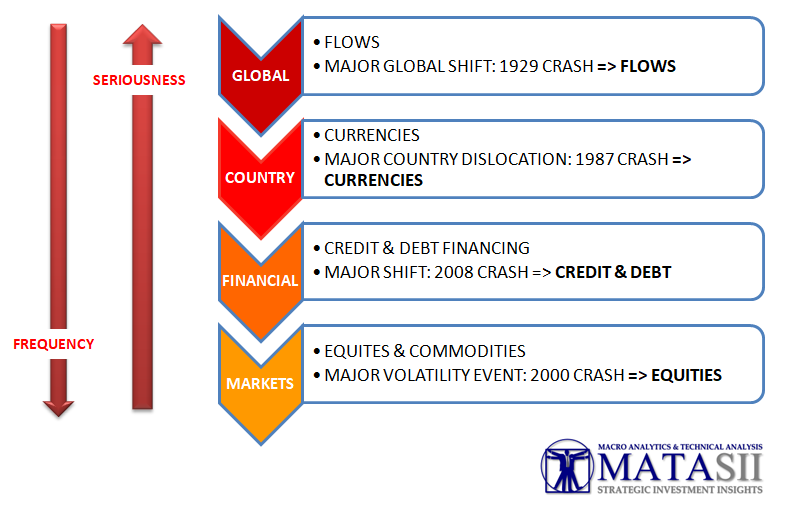 The closest being 1987. The Unholy Trinity above is setting up for just such an occurrence.  I am not saying it will occur tomorrow!  Only that it has a high probability of occurring and if history is any indication it is assured to happen.

But history never repeats and there are factors coming into play which we will get into in a few moments. 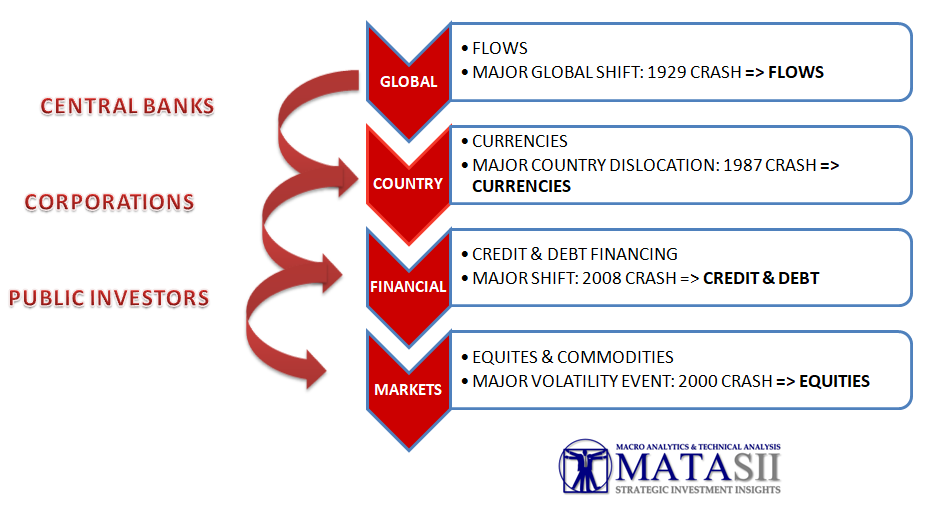 To fully appreciate the conundrum we and Central Banks specifically now presently face we need to understand the importance of three major activities operating independently yet intertwined in three different areas of investment influence. 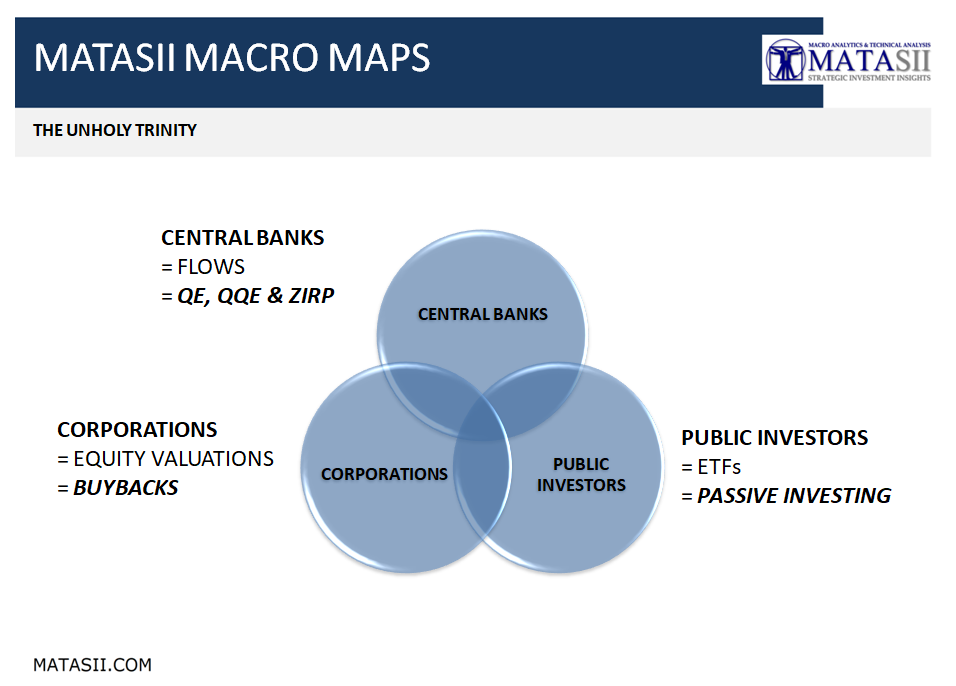 Unfortunately, the Unintended Consequences of these three entities has the potential to now create a perfect storm. 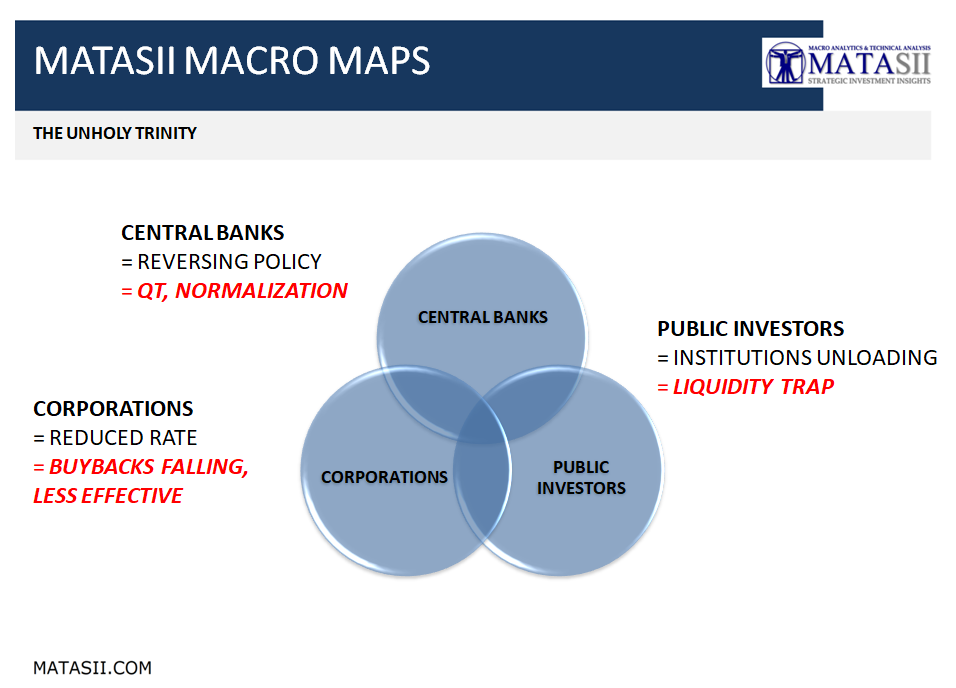 Consider the degree which these shifts are occurring: 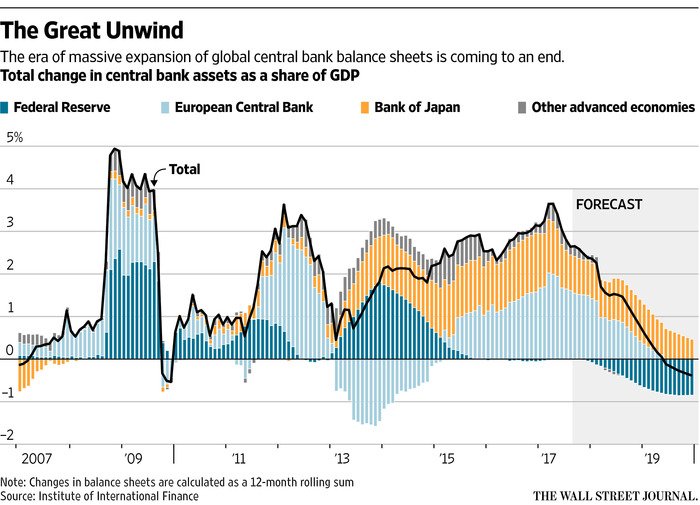 This is obviously serious and many don't believe the Fed will be able to follow through. Equality as serious is those dissenting from the Fed's view of the world because they are signaling a Recession or worse lies ahead in 2018. 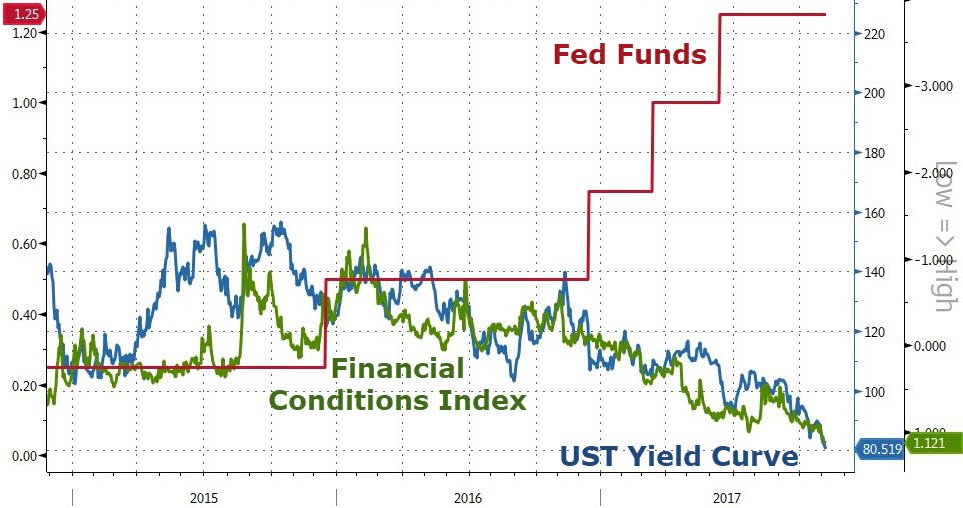 The three QE programs have fostered a full array of unintended consequences that are ready to "come home to roost" from Risk Parity and a plethora of investment strategies, to risky Rehypothecated Collateral Chains to diminishing Trade Liquidity due to higher capital regulatory requirements and Fiduciary Risk etc.. 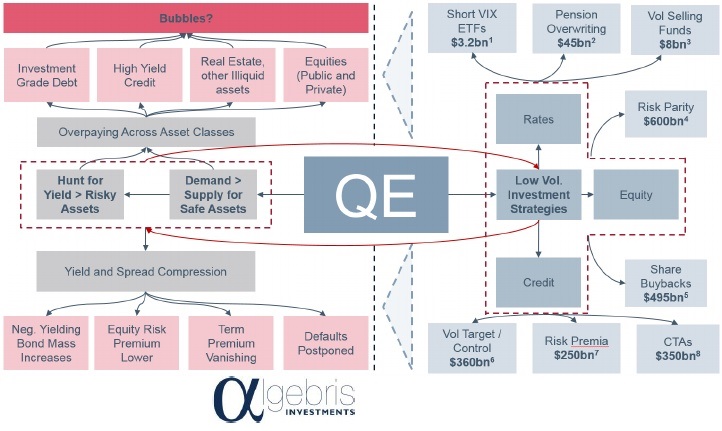 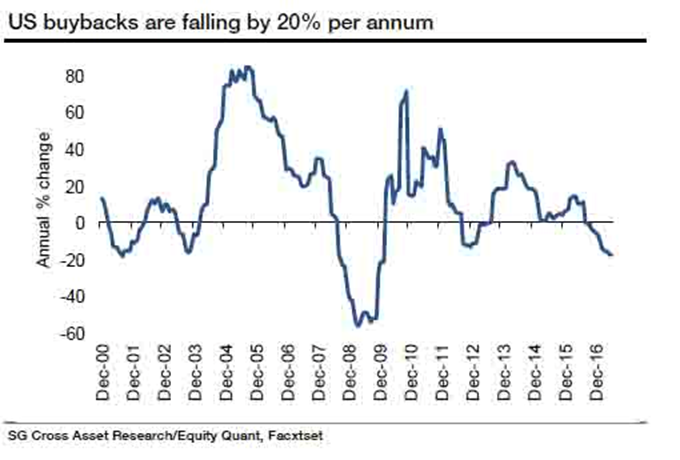 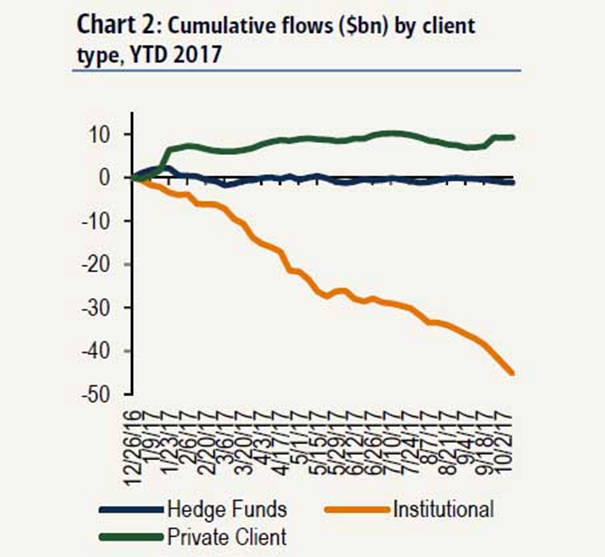 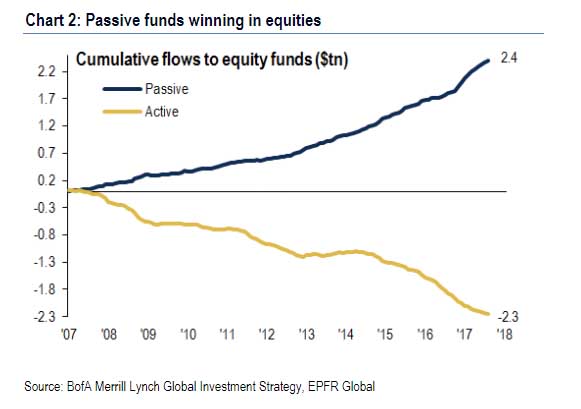 The psychological  issue with the collapsing Unholy Trinity will be the perception of the withdrawal of the Bernanke / Yellen “PUT”.  The Central Bank will no longer be seen to be supporting higher asset values in its quest to stimulate consumer demand through the “Wealth Effect”.

This may be a bigger issue then the reality of the individual components? 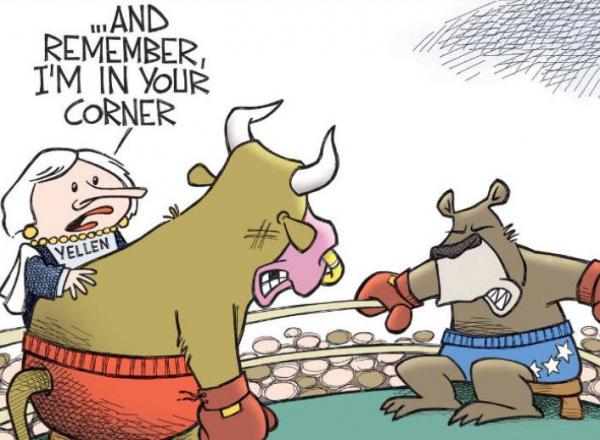 As important and critical as the elements of the Unholy Trinity are there is something occurring that is even more important.

Charles Hugh Smith and myself began laying this out in a just released 32 minute video discussion, supported by 44 slides concerning what we termed the "Big Reversal".

The world is leaving an era which as witnessed unprecedented  global debt growth,  work force demographics and the emergence of profoundly disruptive technologies. These trends through globalization, labor arbitrage, and oversupply have coupled to deliver slow inflation, disinflation and even deflation in various areas of the world.

What we have experienced during this era on a global basis is:

What we are failing to realize according to a major new research paper released by the Bank if International Settlements (BIS) is an understanding of what these trends mean, which can only be seen when all three trends are examined together in a global context.

In the approaching new era, Savings & Investment will fall, however what is critically important to understand is that Savings will fall at a faster rate due to advanced economies social entitlement programs. As a consequence:

The leading determinants that must be analysed are:

The magnitude of stretched Financial markets, the Unholy Trinity and the Big Reversal coming into focus what will authorities do to hold all this together or are we immanently about to see a historic crash?

Are the financial charts about to look like the "wellness cycle" of a turkey - where investors are the Turkeys Wall Street will  feed on for the upcoming Thanksgiving? 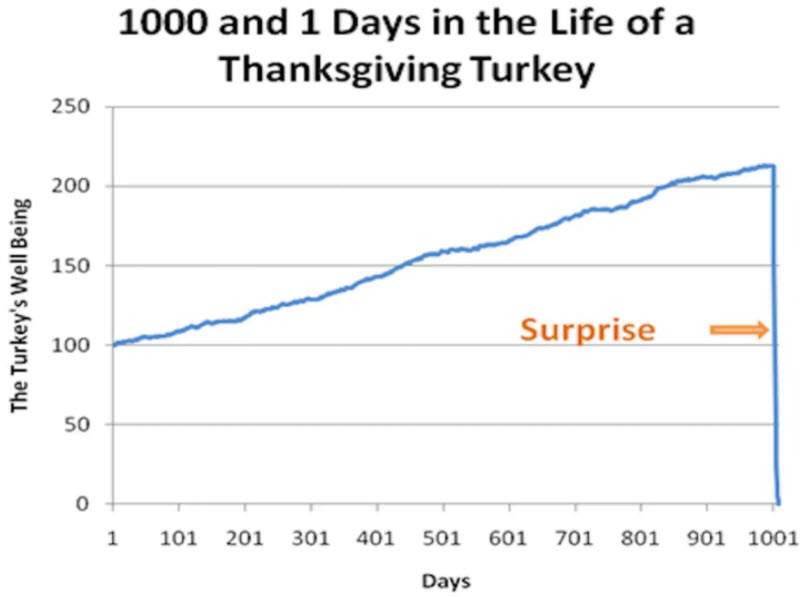 The answer lies in fully understanding that the powers to be will do everything and anything to arrest a financial crisis and maintain the status quo. We have witnessed time and again they will change the laws, change regulations, put up tax barriers or simply collude with other powers to make this happen. It is one of the reasons we are watching what appears to be a market headed towards a Minsky Moment. 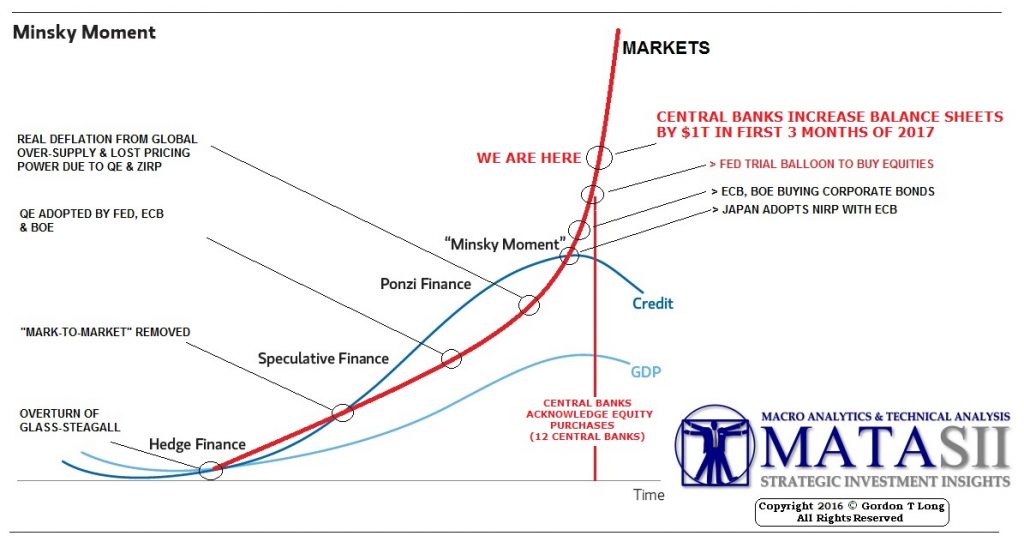 There is little doubt in my mind we are headed towards a De-Dollarization event and a final Hyperinflation blow-off (which as I have mentioned in other sessions is first and foremost a Currency event).  An event that will lead to a Fiat Currency Failure.

So how might all this unfold? How can we make any sense of it all as investors so we are somewhat prepared.

Let me speculate with you for a moment and show you how I currently see it. No doubt this view will change as the real world unfolds but it may be helpful in envisioning possible outcomes.

Lets first consider the stages we have come through:

In Stage 3 we started with "B" and have moved through "E" shown here. 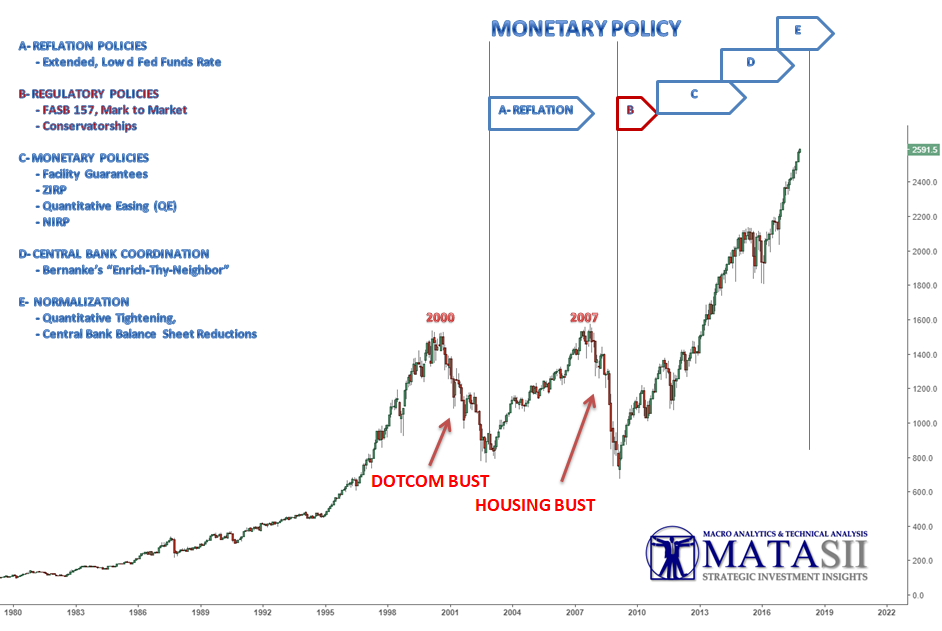 What lies ahead is likely:

I have labeled these shifts in "F" through "I" in this schematic.

Clearly a Fiat Currency Failure lies ahead which we have been signaling and following in this chart from 2010.  We have tracked closely to it over the last decade.

On the other side of it is a New World Order. It will be a  multi-polar world order with an IMF SDR based international trade and balance of payment settlement currency, among many new institutional approaches and structures. 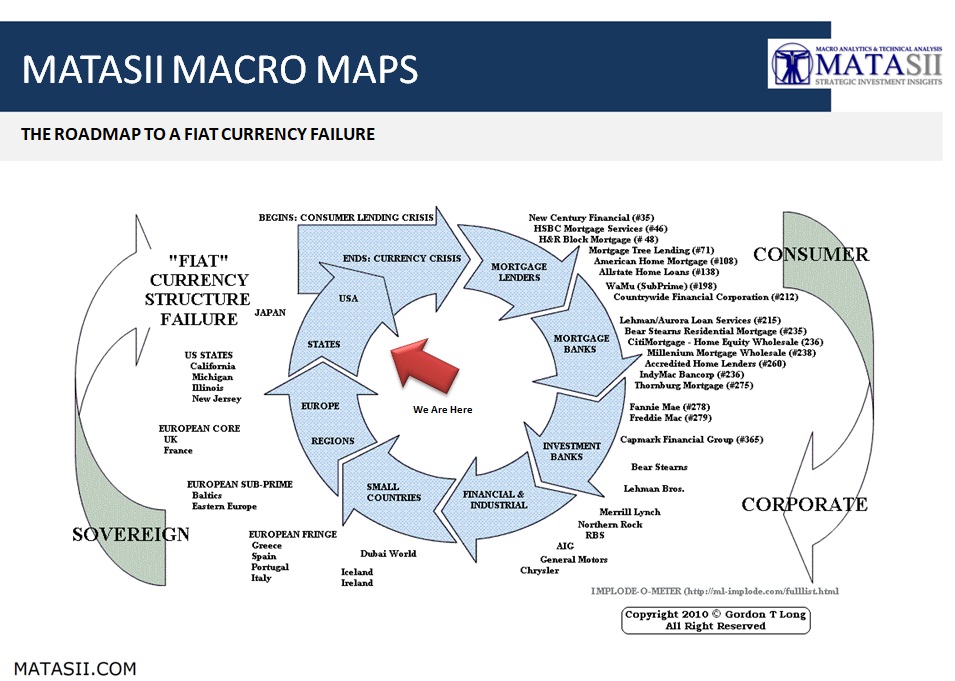 It is all to be expected as Globalization firmly takes hold and becomes fully operational and not run like a fiefdom. 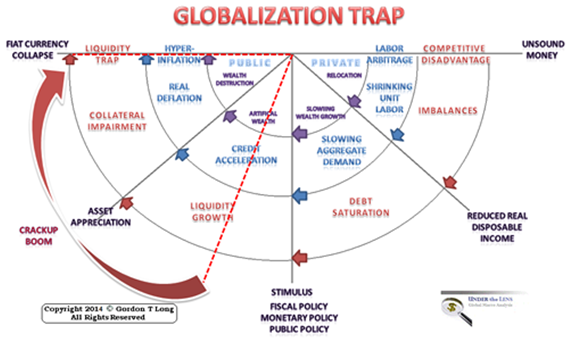 These are my current perspective and views. Be assured they will turn out differently but at least you might have something to consider as a framework for reference going forward.

LONGWave – 11 08 17 – NOVEMBER- A Speculative Look Into the Future THE ILLUSION OF GROWTH: THE GOVERNMENT’S GAME OF “SMOKE & MIRRORS”