We are witnessing some notable movements in two key benchmarks we  are following.
The 10Y US Treasury Yield is showing initial signs of a potential broken-out to the upside from a tight consolidation pattern. We warned of this in this month’s Macro Analytic video. We explore it in more detail in a graphic block below.
Additionally, we are observing a noticeable divergence in the Global Liquidity Proxy from the S&P 500.
GLOBAL LIQUIDITY PROXY NOTICEABLY DIVERGING?
We have highlighted the consistent correlation between the Global Liquidity Proxy (GLP) and the S&P 500 for a few years now. The tracking 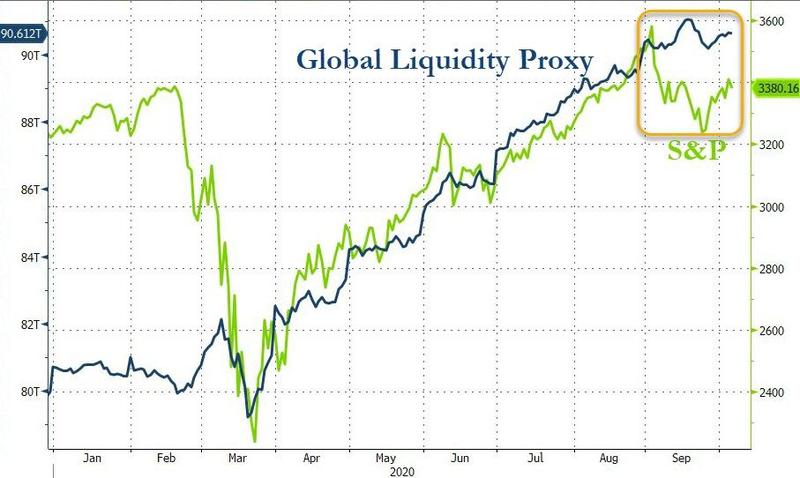 has been consistent until now with the exception of the the period just prior to the March Covid-19 market plunge where the S&P 500 was well above the GLP
We are again seeing a separation but this time it is the market BELOW the Global Liquidity Proxy? The likelihood, based on prior movements is that the markets may be due for an upside lift.
Both these benchmarks should be kept on your “radar screen” between now and the US Presidential Inauguration in January 2021.
THE “CBO’S” BUDGET PROJECTIONS ARE A HARSH REMINDER OF THE CONSEQUENCES OF DEBT AND DEFICITS!
“The longer policymakers wait to fix the debt, the harder and costlier it will get. That fiscal gap would grow to 4.4 percent of GDP if action was delayed until 2030, or 5.9 percent if delayed until 2035.
Delaying action means the necessary changes will be spread among fewer people. Policymakers will have less ability to carefully target adjustments. And ultimately, it will be harder to phase in new policies or give families and businesses time to prepare and adjust for them.” –  CFRB
It is just a function of time until the “bill comes due.”

FURTHER VIEWS BY MY COLLABORATOR ON THIS VIDEO,  CHARLES HUGH SMITH
Quite a lot of things can go wrong, especially if the mainstream’s rose-tinted sunglasses induce a delusional confidence in fantasy.
WHAT COULD GO WRONG?
The conventional assumptions are remarkably rosy:
What could go wrong?

1. A key part of the happy story is the US dollar (USD) will continue its decline, which is wunnerful for stocks and exporters: dollar down, stocks up, yea!

The official explanation for this free-fall in the USD will weaken as the Fed eases / prints. The mainstream thinking is that Japan and the Euro bloc are farther along in their socialization of debt (i.e. their central banks are monetizing fiscal deficits) and so the US will have to play catch-up, weakening the USD.
What could go wrong?
US-centric analysts forget the USD is the primary reserve currency and due to Triffin’s Paradox, it doesn’t just serve the US economy, it serves the global economy. You will never hear a Fed representative admit this publicly, because the PR / fantasy is that the Fed only cares about the American public (awww, gosh-darn it, aren’t they sweet?) and keeping inflation low and employment high.
In reality, the Fed’s core interests are enriching and protecting private banking globally, and maintaining U.S. global hegemony via a strong dollar. Recall that geopolitically, no empire ever got stronger by weakening its currency.
The Fed never addresses the USD’s global role and so conventional pundits ignore geopolitical forces: capital flows, the global need for dollars to service debt denominated in USD and reserves, etc.
Also recall that China pegs its currency to the US dollar, not the other way around. That alone tells you the role each currency plays in the global economy.
For the USD to weaken, the yen and the euro would need to significantly strengthen. But there’s a problem with this thesis.
Rather than being stronger, Japan and the EU are weaker than the US. Credit impulse is essentially zero in both Japan and the EU, both their banking sectors are insolvent, their economies have been stagnant for years (EU) or decades (Japan) and their demographic declines are accelerating. Both are export-dependent, an Achilles Heel as world trade / globalization enters a secular decline that could easily gather momentum.
The US needs capital flows into the US economy, so negative rates are a non-starter. Non-US borrowers have USD denominated debts of around $3 trillion, so demand for USD is not optional, it is a function of credit, commerce and reserves.
Simply put, the US is not about to sacrifice the euro-dollar / petro-dollar and its commercial hegemony just to satisfy domestic pleading for negative rates. Furthermore, Japan and Europe have proven that negative rates only weaken the private banking sector–the exact opposite of the Fed’s Prime Directive.
If the USD strengthens substantially, which it tends to do in crises, that will be very negative for equities. (No, no, no, the Fed has our backs! The Fed will never let my precious portfolio drop a single dollar!)
So sorry, but the Fed’s Prime Directives are not related to your portfolio at all. The Fed’s PR is all about domestic stocks, implicitly or explicitly, but when push comes to shove, your portfolio will be sacrificed without any hesitation to protect private banking and USD hegemony. The empire eats first, and only the tragically misguided believe US stocks are all that matters to the Fed. 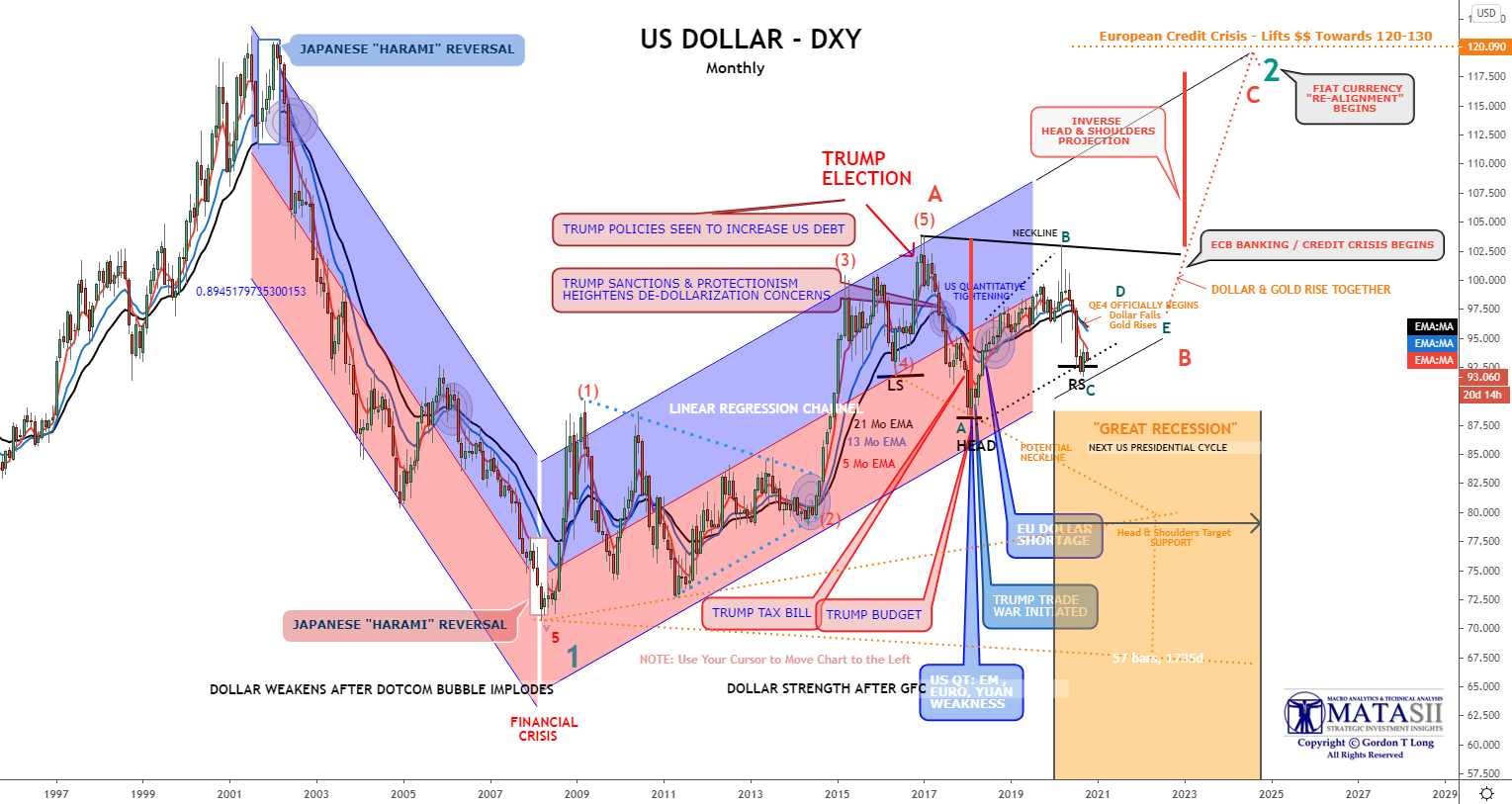 2. The Fed’s easing, QE, etc. will spark a new round of credit expansion.

What could go wrong?
Credit expansion is on life support. There are very few investment opportunities, which is one reason why corporations have poured earnings into stock buybacks. The Fed can’t create low-risk, high-profit investment opportunities, not can it make poor credit risks into good credit risks.
Banks can’t afford to lend to insolvent households, zombie corporations or small businesses. The credit expansion impulse is impaired by the overhang of bad debt, excessive leverage, zombie corporations, etc. and there’s nothing the Fed can do about it. The Fed is pushing on a string.
Furthermore, the Fed is now encountering political resistance to its “enrich the wealthy and bail out zombie corporations” monetary policies. Its room to bail out the super-wealthy is increasingly constrained politically. The Fed is signaling that its focus is shifting from free money for financiers to funneling new money directly to households.

What could go wrong?
As noted, banks cannot lend to poor credit risks, nor can they force those who don’t want to borrow more to take on new loans. Federal spending doesn’t magically create good credit risks or well-collateralized creditors.
Small businesses cannot lower their fixed costs enough to survive, and many of these costs such as taxes and fees will be rising as cash-starved local governments seek more revenues.
The free money will flow not into productive investments but into demand for goods and services which are constrained by declines in trade, high fixed production costs, retirement of key workers, etc.
Inflation will leap, surprising everyone who believed the “low inflation forever” story. As inflation soars, the purchasing power of the federal spending will plummet accordingly.
As UBI, Fed helicopter money, etc. becomes institutionalized, the working poor will exit low-paying, high-stress jobs, creating labor shortages. Small business won’t be able to pay higher wages and survive, and low-margin corporations will be squeezed as well.

CHINA MAY HAVE BEGUN PLAYING ITS “TRUMP CARD”? IS SOMETHING BREWING?