SEVEN REASONS WHY CHINA IS FACING A HARD LANDING IN 2019

SEVEN REASONS WHY CHINA IS FACING A HARD LANDING IN 2019

Seven Reasons Why China Is Facing A Hard Landing In 2019

Seven Reasons Why China Is Facing A Hard Landing In 2019

With the latest China economic data once again underwhelming overnight, it is safe to say that in a world where consensus overwhelmingly expect a global recession to arrive some time in 2020, China - which continues its aggressive shadow deleveraging campaign - remains the biggest potential catalyst for a major economic swoon in the coming year.

Which is why we did not find it surprising that in the latest note from Credit Suisse strategist Andrew Garthwaite, he writes that "to us, China remains the biggest macro risk currently. We would expect aggregate demand to continue to slow (owing to a slowdown in housing, manufacturing investment and exports and there needs to be a destocking) but we also would expect to see an accelerating policy response which should be enough to stabilize PMIs at lower levels."

And while the "house view" from the Swiss bank is that the Chinese government still has policy flexibility and none of the preconditions for a hard landing are currently present, it does caution that as one of its biggest possible outlier surprises for 2019 that, China suffers a hard landing, defined as real GDP growth slowing to sub 5% (for context, the lowest real GDP growth recorded in the past 40 years - i.e. since the reform and opening up by Deng Xiaoping - was 3.9% in 1990).

So is a China hard landing probable in 2019, and how could we get to that point? Credit Suisse lays out several key developments that could get us there, starting with...

Aggregate demand growth, measured as the sum of exports, FAI and retail sales, is at the weakest in 20 years. 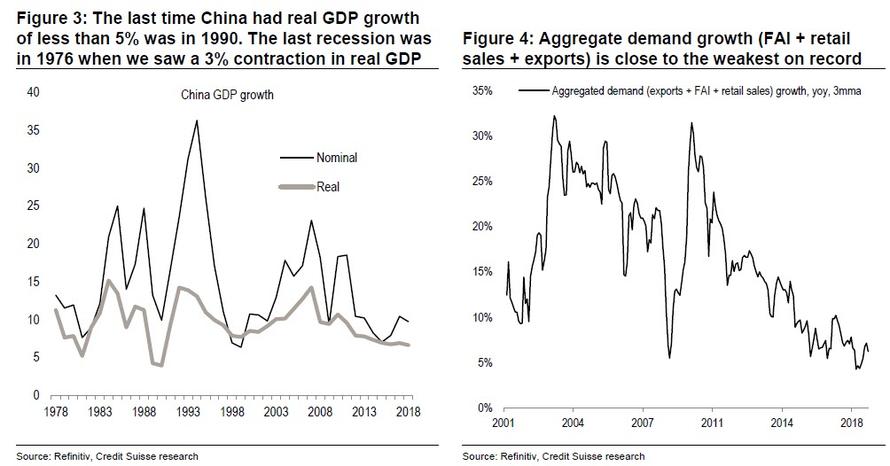 The problem, as CS writes, is that the key drivers of demand are likely to continue to slow:

Housing starts are expected to fall around 8% in 2019, according to our China property analysts – with the fall in property transactions and the end of shantytown loans.

Furthermore, manufacturing investment (which accounts for c.32% of FAI) could slow sharply to reflect the fall in corporate profits, coupled with an inventory destock: inventories are in the top 10% of their range, with NBS PMI new orders vs inventories now at their lowest level in their five-year history.

To Garthwaite, a shock in China's housing sector "seems the most likely catalyst" because if we look at the credit bubbles in Spain, Ireland, Japan or the US, then "the recession occurred soon after house prices started to fall." Consider this: China has seen the fourth biggest increase in credit to GDP of any economy over a 10-year period; this is notable because all the other countries that have seen a larger increase in leverage ended up with major recessions (Ireland, Spain and Thailand).

As we have discussed previously, much of this credit excess has gone into real estate (as is often the case). Furthermore, in China real estate is as high as a proportion of GDP, and two measures of affordability look clearly stretched: rental yields are one third of the mortgage rate (a simple measure of affordability) and the house price to wage ratio is among the highest in the world.

As such, CS thinks that property is the key to a potential hard landing in China as property accounts for 40-50% of banks' collateral and around half of household wealth.  The worry is that:

Demographics is not helping as well. The working age population has already peaked and the country is rapidly ageing. Rising urbanisation should be supportive, but the Japanese experience makes us less sanguine. Admittedly, it is slow moving and unlikely to cause a large price correction in itself. 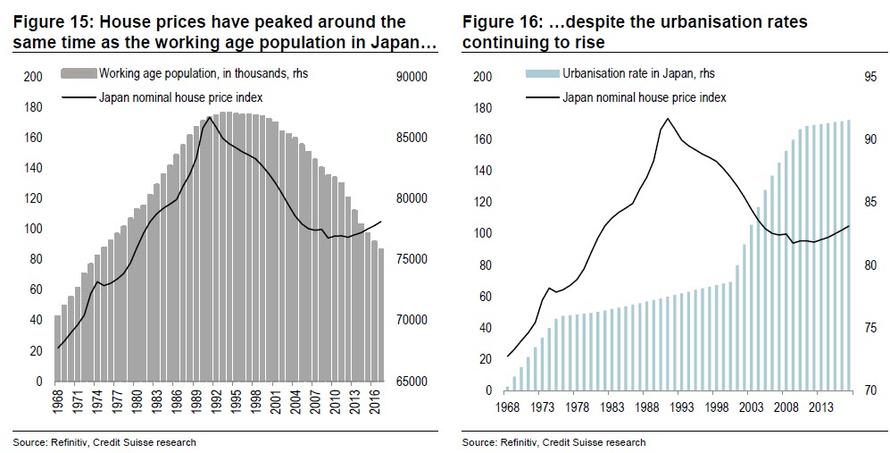 The hope is that LTV are low in China and thus a large collapse in house prices would be required to trigger negative equity. Still, Credit Suisse is confident that the trigger point would be around a 30% fall.

Meanwhile, the worry is that growth in shadow lending means that there may be a lot more hidden leverage. As such, the fall in house prices needed to trigger negative equity could be a lot less than is generally thought.

That said, China has two key supports for allowing an ‘overvaluation’ of real estate— first, that disposable income is still growing at ~8% (helping to improve affordability over time) and second, there are very few alternative venues for investment in mainland China (with a high saving ratio, capital controls and an underdeveloped financial markets). The Swiss bank also admits that Chinese property developers tend to lead property turnover, which in turn leads property prices. Property developers have recently started to underperform but have held up remarkably well in the past year. 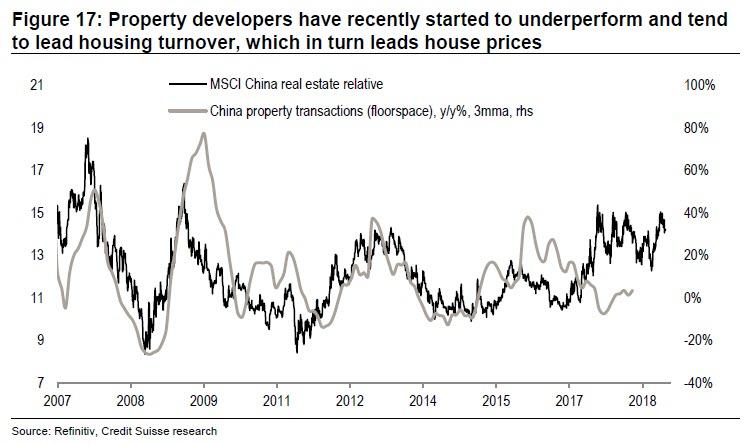 The investment share of GDP remains extreme. This is a problem because when GDP moves from being investment-led to consumer-led, the GDP growth rate tends to halve. 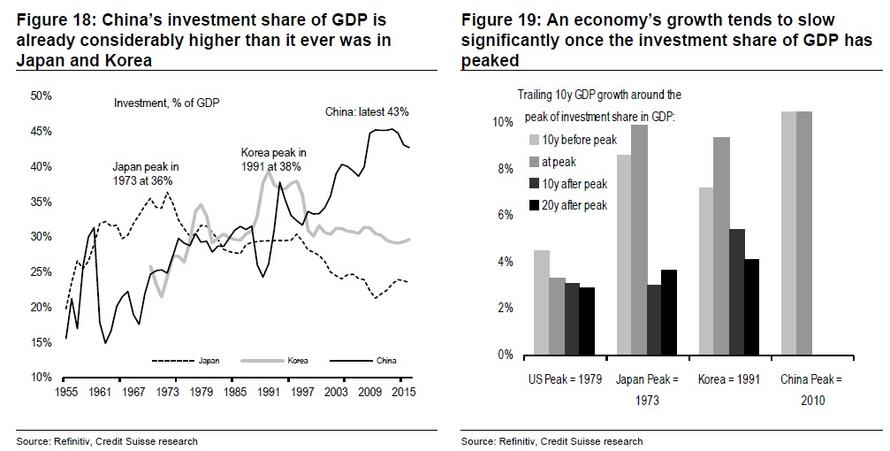 The excess is so great that while China accounts for 22% of global investment, it is responsible for just 10% of global consumption and thus this excess capacity has to be exported. However, this is now more difficult for both political and economic reasons. The danger is when excess capacity leads to domestic deflation. This pushes up real rates which could in turn trigger a major deleveraging. Both PPI inflation and GDP deflators have dropped significantly recently. 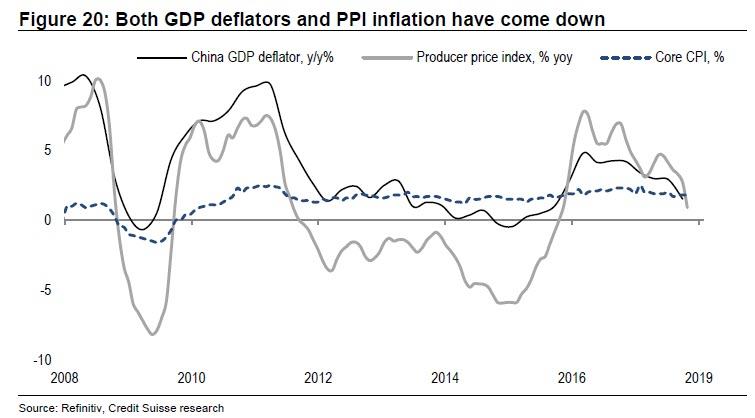 Garthwaite is worried that China's leadership does too little, too late and that in turns allows the credit bubble to deflate much more aggressively. The risk is that the leadership has a higher ‘pain’ threshold than normal to slowing growth as: (1) with the lifting of the term limit for President Xi, there is less need to focus on short-term boosts to growth, and (2) there is not yet a sharp rise in official unemployment with the job offer to application ratio still high at 1.2 and the urban unemployment rate of 3.8% officially (its lowest level since 2002).

The other issue might be that leadership may seek to avoid having a stimulus that would result in a current account deficit (which in turn would mean that China would have to ‘borrow’ from foreigners). The current account fell to a small deficit for the first three quarters of 2018. Indeed, this might mean that the leadership would deem cutting rates and allowing the RMB to depreciate as the most appropriate response—something that would not only export deflation but also potentially cause a protectionist backlash  among its trading partners.

With a consumer share of GDP of 39%, it is obvious that in the long run growth has to be led by the consumer. The problem is that after Norway, China has had a bigger increase in household debt to GDP than any other country

While it may comes as a surprise to some, the debt to disposable income ratio is above that of the US (at 118% versus 104% in the US). The debt service ratio has also increased significantly in recent years, and is likely to increase further given that consumers are incurring more expensive forms of borrowing, i.e. via credit cards or short term loans. Credit card debt to GDP now is about 7%.

As a result, Credit Suisse economists argue that growth of nominal disposable income net of debt services (i.e. income available for consumption) has dropped to 2%. 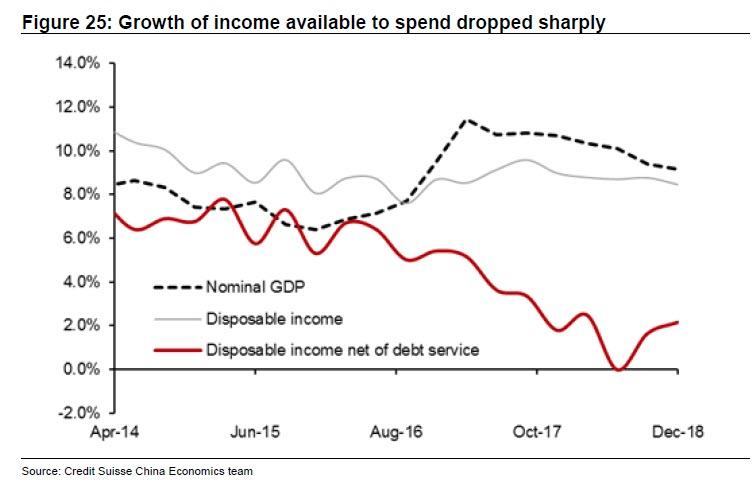 One should also consider the costs in terms of output lost due to contraction in general economic activities. According to a paper published by NBER, the financial crises between 1980-2007 resulted in a hit of c7% of GDP on average (admittedly with a relatively large standard deviation of 9%). A 7% hit would push Chinese GDP growth to conventional recession territory.

Clearly, the issue is whether it would be significantly different in China's case, and as Credit Suisse notes, the question to ask is whether China has the fiscal flexibility to deal with a banking crisis.

Moreover, the fiscal flexibility is limited by a combined budget deficit (state and local) of around 6% to 8% of GDP. With around 23% of local government revenue coming from property/land sales, then the budget deficit could be significantly worse than this. Finally, if we include local government financing vehicles and other off-budget liabilities, total government debt to GDP is at 68%. The number is likely to be much higher once we include debt owed by SOEs, as non-financial corporate debt is at 155% of GDP and, according to ADB, SOEs account for approximately 2/3 of them, i.e. more than 100% of GDP. Thus, China's fiscal ability to maneuver could be much more limited than would appear to be the case.

Credit is giving a warning signal

Credit tends to lead the cycle, and we believe Chinese credit is giving a clear warning signal. As we have discussed frequently, China corporate bond defaults hit an all-time high in 2018.

So assuming China does suffer a hard landing, what would be the impact of such an outcome on the global economy and global markets? In a word, it would be nothing short of devastating.

China has accounted for 36% of the global growth since 2013 and accounts for 16% of the world GDP (on current exchange rates, 18.7% on PPP). If China growth slows to just 4% (i.e. c.2.2% lower than we expect), that would take 0.4p.p growth off global GDP directly. However, the total impact would be about double the size because the foreign trade multiplier is  typically 2x to 3x (we assume 2.5x). In other words, if China growth slows, the growth of other Asian countries would likely to slow in response. One can see this beta by looking at the sensitivity of say German exports to China versus China GDP growth (last time when Chinese nominal GDP dropped to 6% in Q3 2015, imports from Germany dropped by c.20%).

Thus, the Swiss bank estimates that China GDP growth slowing to 4% would take approximately 1% off global GDP growth. Global PMIs are already pointing towards 2.8% global growth and thus global growth could fall to just below 2%. This would be the lowest level since 2009.

And yet, even this may underestimate the impact because should China slow significantly, it is likely to be accompanied by deflation (i.e. the GDP deflator becomes negative) and thus nominal GDP in China could slow by even more. If the deflator falls from the current 1.5% to -1% in this scenario, then nominal GDP in China falls from 9.4% to 3% and this then takes 2% off global nominal GDP growth (on consensus numbers for 2019, GDP growth is 3.5% and inflation is 3.2% and thus nominal GDP of 6.7% would end up being around 4.5%). 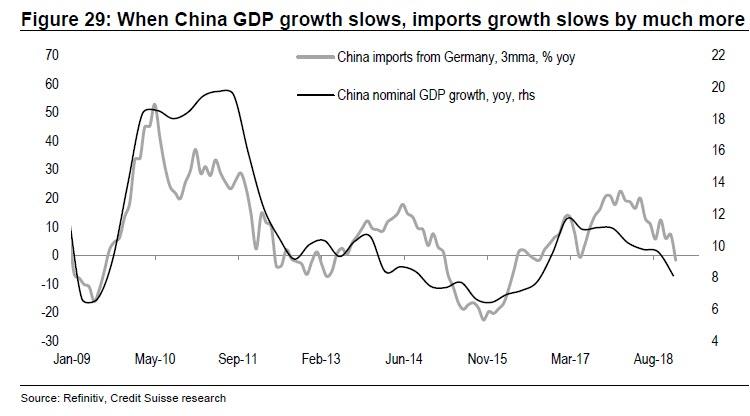 From a stock market perspective, the impact would be even greater because of the high multiples that rely heavily on consumer earnings from China (in the case of staples and luxury, for example). Meanwhile, the much weaker RMB would destabilise emerging market currencies and be a further deflationary force globally at a time when the US economy is slowing.

However, the biggest problem is that this time around, unlike 2008, the space for policy response is limited (real rates in a recession typically need to be cut 4% to 5%), and there is no new China to take over the leadership of global growth.